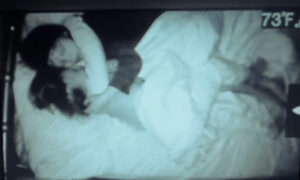 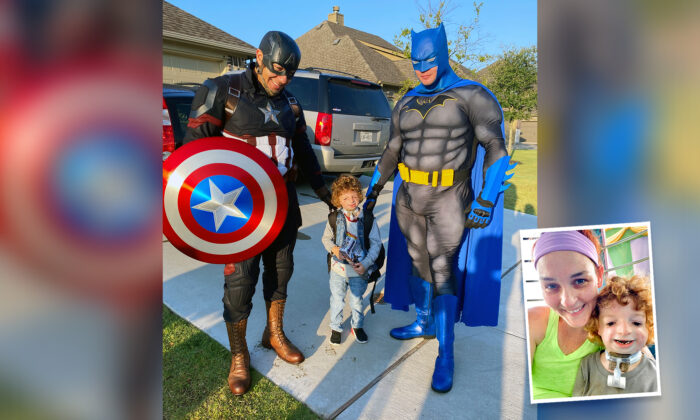 After his mother posted a plea for kindness on social media, a little boy with a rare condition was escorted to his first day of kindergarten by local firefighters and police. The day was made even more magical by the attendance of his two favorite superheroes.

Five-year-old Michael Murphey of Dallas, Texas, was born with Treacher Collins syndrome, a rare craniofacial disorder in which bones in the face and jaw do not develop as they should. It can cause hearing, breathing, and eating challenges, but does not affect mental development or lifespan.

On Aug. 16, Michael got to feel special for a very different reason when a Midlothian fire truck pulled up outside his home.

“Little did I know that we would also have not only police escorts, but also Captain America and Batman to accompany us on the ride,” Michael’s mom, 33-year-old Brittany Denison, told The Epoch Times. “They waited to pick Michael up until shortly after school had started.”

Michael was unaware that the entire street would be lined up with police cars and fire trucks.

Crews let a delighted Michael and his sister, Allison, climb into the fire truck and sound the sirens. After taking photos, the convoy headed to Mountain Peak Elementary with lights flashing.

“The principal had invited all the kindergarten students and teachers outside to welcome us,” said Brittany. “Everyone was waving and cheering.”

As the superheroes delivered high-fives to the kindergarten students, Michael’s teacher, Mrs. Pearson, gave him a welcoming hug and told him that all this was especially arranged for him.

“Then we walked him inside and I wiped a few tears from my eyes before dropping him off with his classmates,” Brittany said.

Ahead of her son’s first day of school, Brittany, who runs a real estate business with her husband, Patrick, was anxious to make sure he stepped into a safe, friendly environment.

She took to Facebook, opening with a quote from the 2017 movie, “Wonder,” about a boy named Auggie with Treacher Collins syndrome: “Dear God, please make them be nice to him.”

“[Michael] looks very different, but he is mentally the exact same as all the other children,” Brittany wrote.  In her post, she requested parents to teach their kids to use “different and unique” in place of “weird and scary,” to not be shy to make friends, and to stand up for kids who are being picked on.

Midlothian firefighter Andrew Gatlin, who had come across the post, relayed it to Fire Chief Dale McCaskill, and the department decided to contact the family.

“You don’t know what everyone’s going through,” Gatlin told NBC 5. “So if you see somebody struggling, or if you see an opportunity to step in and be that hero for somebody, do it. You never know whose life you’re gonna touch or change.”

The fire department later shared photos of Michael’s unforgettable morning on Facebook, captioned, “Michael, you are worth it!”

Brittany, who credits the Children’s Craniofacial Association for providing immense support, claims her biggest parenting challenge is to make future decisions for Michael while he is still too young to advocate for himself.

“You have to constantly consider what is best for him, but also leave him in God’s hands, because ultimately, I’ll never be able to shelter him from this world that can sometimes be very cruel,” she told The Epoch Times. But all challenges, she countered, are “greatly outweighed by the everyday blessings that Michael brings to the family.”

Since his first day at school, Michael has already made friends, and many parents have reported back that their kids were excited to meet Michael, said Brittany. She hopes the ripple effect of her now-viral social media post, and Michael’s magical morning, extend to other special-needs parents in the community.

“That is the most special, knowing that the parents took the time to talk to their children [and] the children are listening,” she said. “All of these different people are still humans, they still need love and connection.”

Brittany hopes that all parents would continue to talk to their children about being kind on a daily basis, and most importantly, ask them the question: “Did you bring a smile to someone’s face today?”

“When you make that connection you’ll be more blessed than you’d ever imagined,” Brittany said.