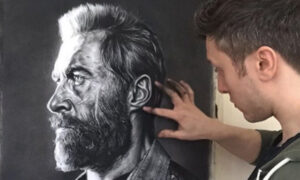 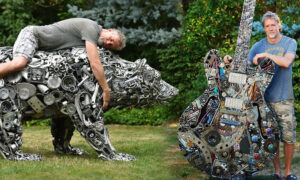 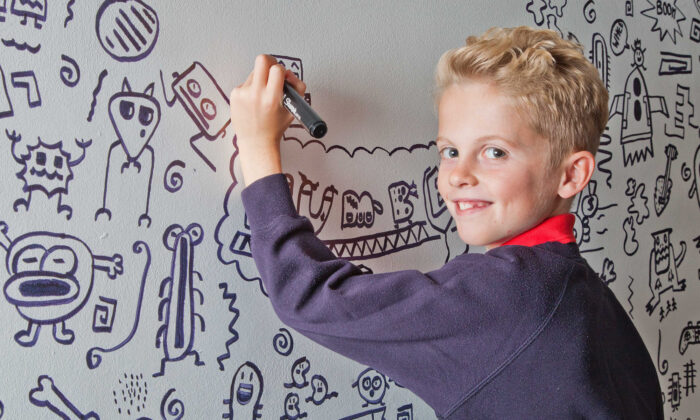 Kids doodling during their classes is nothing new, but a 10-year-old boy in Shrewsbury, England, has become an internet sensation thanks to his imaginative drawings.

Self-described “doodle boy” Joe Whale has been drawing on any available surface as long as he’s been able to, but it’s only in the last two years that his parents, and now the world, have recognized his incredible talent.

In addition to Joe having a huge Instagram following, with over 100,000 followers, Joe’s drawings are now permanently inscribed on the walls, not of his bedroom but rather in a local restaurant.

“It makes me feel happy that I can express myself because all the creations just come from the head and pop out,” Joe told Caters News. “I can dream of them coming to life, and me shaking hands with them, and them coming to life.”

Although Joe excels in his studies and also is a gifted athlete, playing soccer and cricket, drawing is his real passion. Soon after he started inventing his own characters, his parents realized that he would benefit from more encouragement and technique.

“He was in school getting frustrated at the little amount of art he could do,” dad Greg Whale said. “[S]o he used to doodle on the table’s whiteboard in class and get into trouble.”

When he began classes at a local art center called Bloom, a whole world opened up for Joe. Now, his doodling talents were appreciated and his imagination took flight.

“[Joe’s] drawings blew his teacher away,” the proud dad said, “and they gave him his own wall to keep doodling on which he does every week when he goes there.”

Not long after, Joe’s teacher at Bloom, Kerry, had the idea to post pictures of his doodle wall on Instagram.

“His work is very exact and immaculate,” Kerry said,” it’s very balanced, he goes straight to ink and creates perfect work straight from the start, no practicing beforehand.”

Local restaurant Number 4 saw the impressive doodles and decided to commission Joe to cover one of their dining room walls with an entirely original piece. This was a big challenge for this small boy, but he took it on with gusto.

“When my dad first brought it up, I was really excited, but I thought it was going to be really small,” Joe said. “When I looked at the wall, it was ginormous. I was like, ‘How am I going to fit all the ideas in here?’ But then… they just sprung to life.”

The proud dad said: “Joe loves doodling and we’re so proud of everything he’s achieving, the fact that a completely independent business has asked our 9-year-old son to do a professional piece of work for them is incredible.”

Since his first big commission, Joe has shown no signs of slowing down. He has produced prints that people can decorate their houses and apartments with, as well as drawings that are designed to be colored in.

Doodling has been a great source of comfort for Joe in an uncertain world. With the ongoing pandemic, Joe has used his considerable skills in providing drawings that encourage people to stay at home and support the National Health Service in the United Kingdom.

“During a time like this when everyone is worried, it makes me happy when I draw,” Joe told the Shropshire Star. “I’m concentrating so much on my doodles that I forget all about any worries.”

By downloading and coloring in Joe’s creative doodles, others can let their imagination run away too.

“It’s a great way for other children to do the same and forget about what’s going on outside,” Joe said.