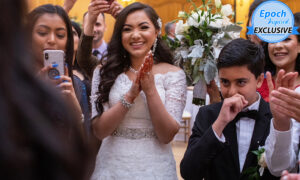 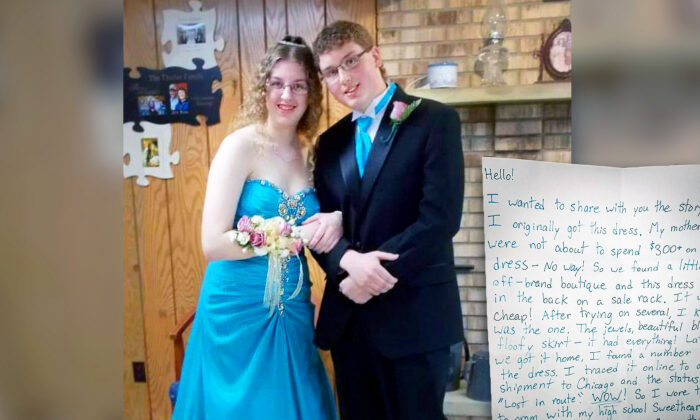 A Pennsylvania boutique owner stumbled on a mystery when she found a hand-written note paperclipped to a dress that had been donated to her store.

Jillian Nimick, owner of Nimi Boutique in Mount Pleasant, gifts prom dresses to students who can’t afford their own. While sorting through a large shipment on June 9, she found the note inside a turquoise dress—which led her on a journey.

It read: “I wanted to share with you the story of how I originally got this dress. My mother and I were not about to spend $300+ on a prom dress—No way! So we found a little off-brand boutique and this dress was way in the back on a sale rack. It was VERY cheap! …”

The note went on, telling how it almost ended up someplace very different; its previous owner had used the dress’s tracking number and traced it to a train shipment bound for Chicago. The status was: “Lost in route,” the note read.

The note continued: “WOW! So I wore this dress to prom with my high school sweetheart. We are getting married in 2020. Some things are just meant to be and I didn’t have the heart to just send this beauty to Goodwill. I knew it needed to have a greater purpose, since the universe seemed to work so hard to get it to me.”

In a bid to solve the mystery of the dress’s owner, Jillian shared the note in a video on social media. “I wanted to know if they got married during the pandemic,” she later told Trib Live.

Not only did her video garner a breathtaking 1.2 million views; it also struck gold when 24-year-old Shania Potosky—none other than the original owner of the turquoise dress—reached out online, and the two arranged a meetup.

“They hoped someone who needed it got it,” Shania told the news outlet. “That dress had a story, [and mine] had a story.” Shania and her high school sweetheart Stanley did, in fact, tie the knot—in September 2020.

“I wanted my dress to be able to give someone else the opportunity to go to prom, make someone feel beautiful, have a sense of confidence,” she explained. “Some people have an aversion to things that are secondhand, I don’t understand that. You never know what you’ll find.”

Leaving the dress at an Angela’s Angels drop-off location in Latrobe in 2019, she had no idea it would find someone who would connect with it so deeply.

The store owner herself had once nearly missed her own prom, for she couldn’t afford an extravagant dress. In a video update, she said she plans to include inspirational notes inside all her donated dresses.

“I’m thinking since prom season, special occasions have ended, [the turquoise dress] will not find a new home till next year,” she told Fox News. “But I will say she’s the dress that keeps on giving.”

She plans to register her prom dress donations as an official 501C nonprofit, adding that she’s already begun receiving more gowns since the story went viral.