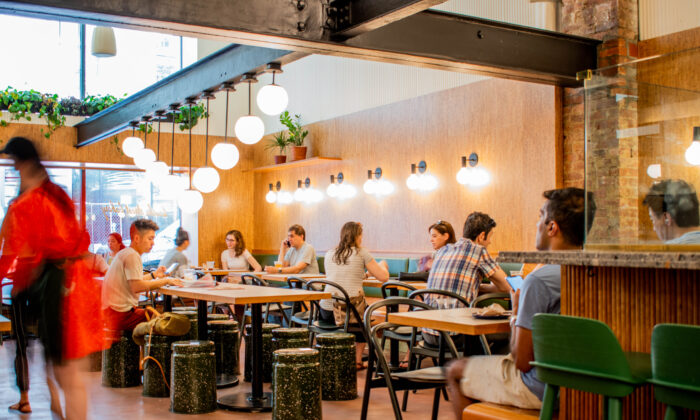 The vibe is casual and relaxed. (Olivia Parsonson)
Destinations

NEW YORK—For Paul Allam, the decision to move half-way around the world from Sydney to New York City came from his love for the Big Apple—but also from a vision that an outpost of his popular Sydney bakery would do quite well here.

“People love to eat good food here, and the coffee culture has really transformed in the past decade,” Allam said.

At Bourke Street Bakery in Manhattan, it seems impossible to make a wrong choice. Allam has an unwavering commitment to quality ingredients and the kind of craftsmanship that draws bakers and cooks who aspire to the same high standard, creating an environment marked by a positive spiral focused on excellence.

You can literally see and taste it: something as basic as a croissant reveals, on first bite, perfect airy layers that are almost too beautiful to eat (but impossible not to).

The bakery has its loyal fans who hanker after items you just can’t find anywhere else in the city—sourdough loaves made with turmeric and black pepper, or with dried plum—and every week, a surprise bread (for example, a recent one was a fenugreek and maple sourdough). The bakers must love working there. What fun to come up with such flavors.

And that’s not to mention the sweet treats, such as the ginger creme brulee tart. Even humble ingredients—butter, ketchup—are made in house.

Customers who may come in for a bite of pastry or a sandwich may be taken aback that the care taken for the food extends to coffee as well. But in Australia, coffee culture is a big deal, and espresso-based drinks are among the best-selling items at Allam’s bakeries in Sydney.

The bakery’s feel is quintessentially Australian, with a casual, relaxed vibe, but the culinary side is serious business.

“As a trained chef who became a baker later in life, I’m obsessed with produce and ingredients—finding seasonal, fabulous ingredients, wonderful produce—food made from scratch, not from opening packets,” Allam said.

“I’m lucky to have traveled and eaten in many countries around the world. Does that tell you I’m not so young anymore?”

In Italy (“one place that blew really blew my mind”), he was utterly impressed by the artisanal traditions—and the time devoted to enjoy food.

Among the ingredients he’s found, you can count barberries from Iran, XO sauce from China, and the “bounty of vegetables in the Middle East often eaten in the morning.”

In the United States, Allam has noticed that seasons and festivals are more pronounced than they are in Australia.

“They are celebrated and expressed through food—it really suits us actually, because we like to change things up and move things along when new produce becomes available. It keeps things interesting for customers and the kitchen, too.”

“We are making new and interesting sourdough with really high hydration and long fermentation—and the bread is coming out blooming and beautiful. Sourdough has always been the heart and soul of the bakery, so I’m very happy about that,” he said.

Being in New York City, Allam has found sourcing organic and biodynamic ingredients much more affordable, because of its larger market.

He has found “world-class berries” and figs that “ended up on danishes that are demolished daily,” not to mention “incredible” craft beers and many natural and biodynamic wines to complement the menu’s offerings. Perhaps the one ingredient that he could not find a local equivalent to that satisfied him was Aussie lamb, so he imports it.

His lamb and harissa sausage roll, wrapped in just the right amount of dough, is one of the bakery’s more famous items. As many of my ill-timed visits proved, it’s frequently sold out.

With holidays approaching, the bakery is gearing up with fruit mince pies—filled with currants, raisins, and candied peel that have been soaked in brandy and cider for over a month. Those will be available through Christmas (you can pre-order them). And then, after that, something new and wonderful will pop up—no doubt Allam and his team are already working on it.