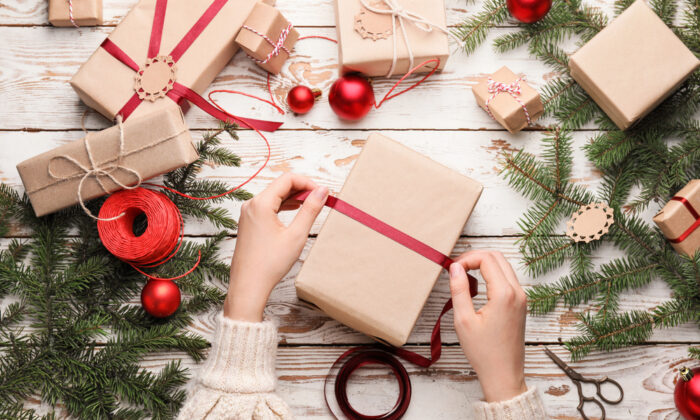 Hallmark has brought out another Christmas romance. (Pixel-Shot / Shutterstock)
Literature

Book Review: ‘Wrapped Up in Christmas Joy’: The Healing Power of Love

Every so often a careless gesture can end up becoming, in hindsight, quite a happy accident. So it is in Janice Lynn’s tale of healing and romance, “Wrapped Up in Christmas Joy.”

Former Marine Cole Aaron has settled into his new life as a firefighter in Pine Valley, Kentucky. However, he remains deeply tormented by his experiences in the service, blaming himself for his actions while under fire. Even though he has found a new set of friends in his colleagues at work, he refuses to let anyone get too close lest they discover his secrets.

Pine Valley is a town that takes its holiday traditions seriously, but Cole has little use for any Yuletide-related festivities, which makes it rather ironic when he finds himself chosen to take on the role of Santa in the town’s Christmas parade.

Cole finds his vow to keep everyone at arm’s length sorely tested when he has an encounter with Sophie Davis, a woman who runs The Threaded Needle, a local quilt shop. In addition to making objects for sale, Sophie is deeply involved with the Quilts of Valor Foundation. It’s a group that creates quilts for wounded warriors. Sophie shows up at the fire station after coming across Cole’s diary, which he had mistakenly put in with some books he had donated to the Pine Hill Church.

Initially examining the diary only to learn the writer’s identity and thus return it, Sophie finds herself transfixed by what Cole has written. His visible torment calls to mind the pain her own father must have felt while in combat—a pain her dad was apparently never able to come to terms with.

Planning simply to give Cole back his diary, Sophie instead finds herself attracted to this guarded soul, while at the same time wanting desperately to help ease the pain she knows he carries.

Believing his past renders him unworthy of any type of relationship, Cole quickly shuts down the possibility of something developing between the two. Yet despite his efforts to the contrary, he finds himself running into Sophie again and again in situations that range from a rather humorous cat-in-a-tree rescue to being paired up with her as part of a Christmas toy drive. Sophie’s bubbly personality and seemingly boundless optimism cause Cole to wonder if perhaps she sees him as something more than just an object of pity.

With “Wrapped Up in Christmas Joy,” author Janice Lynn shows the importance of not allowing oneself to be defined solely by past events. This idea applies not only to Cole and Sophie but to other Pine Valley residents as well. Bodie, another former soldier, is well on his way to rebuilding his life; Rosie has outlived three husbands and is absolutely terrified of walking down the aisle for an upcoming fourth time. Yet as Lynn clearly shows, it’s only by coming to terms with what has happened before that one can fully open up to future possibilities, with all the potential for joy they can bring.

In a story such as this, the outcome is not so much in question as is the journey the protagonists undergo. Lynn quite ably blends the “will-they-or-won’t-they” issue with humor, drama, and sometimes painful reflections that ensure the reader won’t simply skip to the last page.

Adding greatly to the story’s appeal are the rich descriptions of the town itself. The depiction of The Threaded Needle, for example, calls to mind a store that one might enter after being attracted by the window displays, and then ends up prowling the aisles looking for the perfect gift for that special someone. The tale also conjures up enjoyable images of the townsfolk—particularly a group of women known as “The Butterflies”—while giving the reader the feeling of knowing these people.

An engrossing tale of two people learning to reach out to another via Christmas cookies, sledding, and the heartfelt offer of a helping hand, “Wrapped Up in Christmas Joy” makes for an enjoyable holiday treat. It’s a nice read when sitting in front of a roaring fire with a cup of hot cocoa, or with a blanket wrapped around you while the heater hums.