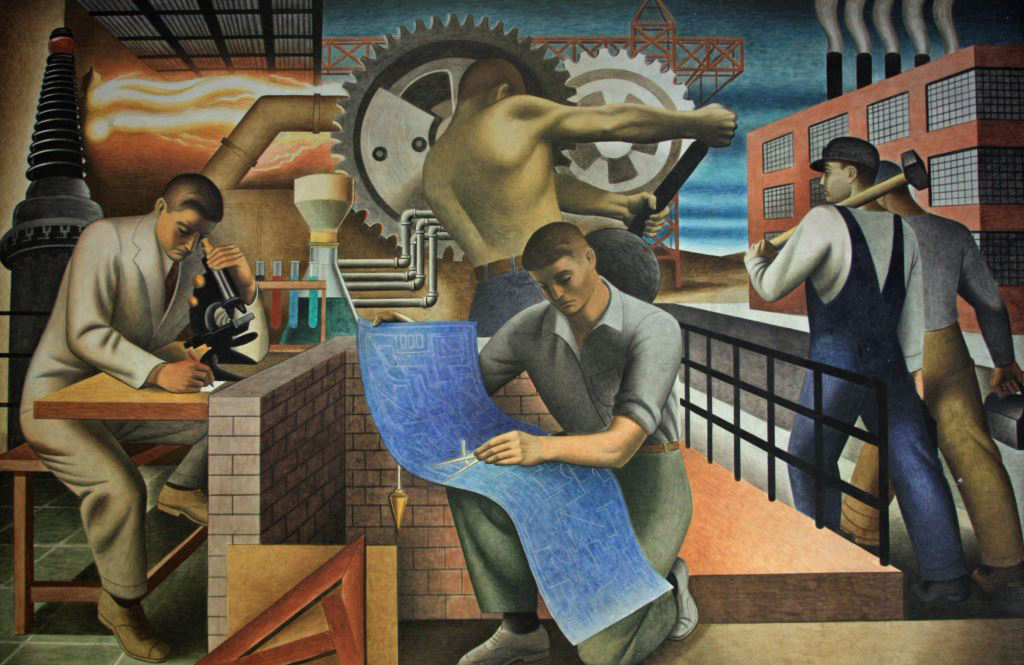 Bustling with work and activity, "The Wealth of the Nation" by Seymour Fogel. Mural. (Public Domain)
Books

Book Review: ‘Visible Hand: The Wealth of Notions on the Miracle of the Market’

A straightforward, nonacademic view of how economics works
BY Dustin Bass TIMEJune 13, 2022 PRINT

Matthew Hennessey, the deputy opinion editor for The Wall Street Journal, has written a new book titled “Visible Hand: A Wealth of Notions on the Miracle of the Market.” It is a straightforward, unpatronizing breakdown of economics without the academic jargon that often loses people.

While reading this book, I thought to myself: This should be handed out with the diploma to every graduating high school senior.

Hennessey uses everyday experiences to demonstrate how economics works and why an economy either flourishes, diminishes, or craters. The author presents the lofty discussion, often referred to in the book as the “dismal science,” in simple terms. In other words, he takes the discussion from the ivory tower to main street.

Accessible to the Common Man

Economists from Friedrich Hayek to Leonard Read to Milton Friedman (all of whom are mentioned in this book) worked to make economics more relatable, and in many ways they succeeded. Books ranging from “The Road to Serfdom” to “I, Pencil” to “Free to Choose” have made economics more easily understandable for the general public, regardless of the reader’s secondary or post-secondary education.

By Hennessey’s own admission, his book on economics is “for people who, broadly speaking, don’t like economics. Or think they don’t.” It is not so much that the author dumbs down economics; rather, he makes it clear that everyone, whether they want to admit it or not, engages in economics. To make those points, he utilizes personal experiences from his childhood to adulthood, as well as pop culture references (from his childhood and adulthood).

One of the main themes of the book (and for that matter, economics in general) is that economics is about choices. Hennessey references his time in high school when he had a choice between high school baseball and drama.

He really liked both but couldn’t do both. He states that, little did he know at the time, he was engaging in “trade-offs” (an oft-used idea of economist Thomas Sowell, who is mentioned quite often in the book). At that age, he wasn’t forking out money, but he did have to use the form of currency he possessed: time.

The author relates this fork in the road to the many other forks in the roads he encountered, as well as the ones we as members of the populace encounter.

What do the Sex Pistols have to do with economics? In fact, Hennessey centers a sizeable section of his book around a comment made by the Sex Pistols’ lead singer Johnny Rotten: “Ever get the feeling you’ve been cheated?”

The rhetorical question that Rotten asked is not rhetorical in the book. The answer is yes. Hennessey, in his fifth chapter, titled “Prices,” demonstrates all the ways we can feel cheated, even when we aren’t cheated. This feeling has to do with how a company establishes its prices in order to create profits. He uses his son’s love of Lego blocks to demonstrate the point. It is a very creative, yet simple method for explaining how supply and demand and utility affect product pricing.

Regarding his son’s love of Legos, Hennessey discusses in detail his parents’ economical maneuvering, ranging from charity work to entrepreneurship. There are plenty of people who choose a career path based on charity work. His parents were like this.

When an opportunity opened for his father to run a shelter for troubled youth, he jumped at the chance. For nearly a decade, his father’s work was based on helping the community.

Then a member of the community decided to play politics. Hennessey takes the moment to demonstrate how this is part of economics, and a multifaceted part at that. His father lost his job just months before he would have been eligible for a pension. Along with that, anyone who has worked for a charity organization—unless, of course, we’re talking about that one 501(c)(3) called the NFL—knows that the pay is less than stellar.

Like so many individuals, couples, and families over the centuries, the Hennesseys needed to make a decision, and it was one that needed to be made quickly. The family went into business for themselves, and did so with some help from family members, friends, and members of the community. It’s an example not just of how financial capital assists entrepreneurs, but also of the importance of social capital (though the term social capital isn’t used in the book, the reference is clear).

And for this small business, prior community investment proved pivotal. The Hennesseys bought an old bar and turned it into a successful enterprise, one that impacted the family and the community in positive ways. The author describes how this small business supported the family, provided those necessary first jobs for him and his siblings (along with other locals), strengthened the social fabric of the community, enabled the family to take vacations, and allowed his parents to eventually retire comfortably.

There is also within the tale a discussion of how supply and demand works, and not simply with products (that is, drinks and food), but the welcoming environment in which people find themselves.

The numerous stories bring economics to life for the reader—and that, in itself, is the author’s main goal.

Hennessey, in a less than subtle way, proves that economics is all around us at all times. It is, as he states in the book, like any other law of nature. There is nothing you can do about it except abide by it, and when you attempt to defy that law of nature (like many, including governments, try to do) bad things happen.

There are those who believe that they can deny the laws of economics (that is, nature) without recourse. They are commonly called socialists.

Hennessey proves to be a very nonconfrontational writer, at least for the vast majority of the book. But then he discusses the problems regarding Democrats and Republicans and their less than free-market-enterprise views.

There is a thorough discussion on Sen. Bernie Sanders and his ilk (“ilk” is used by the author) and how uneconomical perspectives put into practice (or rather forced into practice) will ultimately destroy the lives of regular Americans.

It’s not hard to sense the passion (or understandable anger) with which Hennessey writes. He has his own kids to take care of, and it appears he wants to make it clear that everyone should be thinking on those familial terms.

Economics isn’t simply for those who have read “The Wealth of Nations” by Adam Smith. Those readers would be few and far between indeed, but rather this book is for those who, broadly speaking, don’t like economics. Hennessey has tried to make economics accessible and enjoyable to learn for just about everyone.

Why? Because while we may not be interested in economics, as the author states early in the book, “economics is interested in all of us.” All the more reason to consider getting the book for that recent graduate.

‘Visible Hand: A Wealth of Notions on the Miracle of the Market’
By Matthew Hennessey
Encounter Books, April 12, 2022
Hardcover: 248 pages