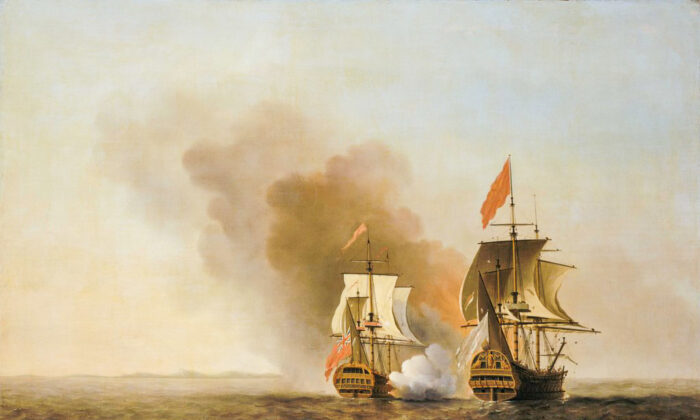 A painting by Samuel Scott of a battle during the War of Jenkins' Ear, depicting the capture of the Spanish ship Nuestra Señora de Cavadonga by the British ship Centurion in June 1743. (PD-US)
Literature

Book Review: ‘The War of Jenkins’ Ear’: A Neglected Conflict

Many people have probably never heard of the “War of Jenkins’ Ear,” which sounds like the name of a skit from an old Monty Python show.

In my own case, I was a history major in college with two years of graduate school in that same subject, and until now, if pressed, I might have dredged up a few details of that struggle. I’d have told you that decades before the American Revolution, Robert Jenkins was captain of a commercial ship and that the Spanish stopped him, tortured him, and cut off his ear. Jenkins returned to England, went to the Parliament, waved about his severed ear, and demanded justice. Parliament then promptly declared war on Spain.

With the exception of his missing ear, several of these details are wrong.

In “The War of Jenkins’ Ear: The Forgotten Struggle for North and South America: 1739–1742,” historian and journalist Robert Gaudi gives his readers a fascinating and well-written account of this war, its causes, its battles, and its profound consequences for the Americas.

As Gaudi demonstrates, money and national pride fueled this conflict. Britain at this time held the horrific contract with Spain known as the “Asiento de Negros” (Agreement of Blacks), which gave the British the right to import slaves from Africa into the Caribbean and South America.

A part of this contract also allowed the Spanish to board the British ships in search of contraband. Consequently, the Spanish began stopping these slave ships as well as other British vessels to look for smuggled goods being brought into the region and for gold and silver being taken away. Often they were not only boarding the British ships and making inquiries, but were also resorting to theft, torture, and even murder in their quest to find smuggled goods.

In 1731, a “guarda costa” (coast guard) captain and his men boarded the Rebecca, ransacked the merchant ship, tortured Captain Jenkins so that he might tell them where he had hidden his contraband—there was none—sliced off his left ear, and stole anything they could lay their hands on, including navigational instruments and the clothing of the sailors. The intrepid Jenkins managed to get his ship back to Britain, where he complained of these atrocities, but the incident roused few calls for revenge.

As more such costly intrusions took place, however, politicians opposed to the government, the British South Sea Company, and periodicals and plays helped sway public opinion, and a majority were soon calling for war with Spain. Jenkins and others whom the Spanish had abused appeared before Parliament, the outcry against these attacks on British pride and pelf grew, and by 1739 Spain and Britain were at war.

This conflict brought the British high casualties as they attacked Spain in the Southern Hemisphere. Most of the soldiers and sailors who fell were not the victims of bayonets or bullets. No—they died from poor diet, the heat, and especially, the mosquitoes. British military planning even took into account the season when these insects were most ferocious, but to little avail. Mosquitoes, the climate, and lack of preparation proved as formidable enemies as the Spanish.

Eventually, the war petered out, blending into the War of the Austrian Succession, a broader conflict that ended in 1748 with the Treaty of Aix-la-Chappelle. Despite their several attacks, the British failed to make a dent in Spain’s hold in America, and the Spanish failed to retake the North American colony of Georgia.

That brief summary of “The War of Jenkins’ Ear” doesn’t do justice to Gaudi’s fine account of all these events. He examines in-depth the circumstances preceding and causing the war, detailed descriptions of the battles and their commanders, and a thorough examination of the consequences.

Of particular interest are the mini-biographies written by Gaudi about the participants in this conflict.

We meet George Washington’s older brother Lawrence (whom George idolized), who joined with the British forces, took part in battle, and returned home to build Mount Vernon, named after the admiral under whom he had served.

That man, Edward Vernon, was a skilled tactician with an explosive temper. He spent as much time quarreling with his inept Army counterpart, Maj. Gen.Thomas Wentworth, as he did with the Spanish.

Spain’s King Felipe (King Philip V), whom Habsburg inbreeding had left mad and at times catatonic, often lay for days in bed in his beloved wife’s dirty nightgown. Here is just one instance of his madness:

“Nightly, during the first few hours of restless sleep, he tore at his cheeks with his fingernails, waking to a pillow soaked in blood. Unknown bodily secretions produced a weird phosphorescent effect: his pajamas and sheets were suffused with an eerie glow that no amount of vigorous laundering could wash away. More than once he flung himself from his bloody, neon bedding, seized a sword and ran around the palace screaming “Murder, murder!’ at the top of his lungs—until subdued by specially appointed guards.”

American readers will find the chapters on James Oglethorpe especially fascinating. Most of us recollect that Oglethorpe founded the colony of Georgia as a haven for debtors, but few of us may know that he opposed slavery, forbid it while he served as governor of the colony, and championed religious freedom, which led to the founding of a Jewish community in Savannah.

In “The War of Jenkins’ Ear,” we also discover that Oglethorpe was an intrepid military commander who bravely defended Georgia against an attempted Spanish invasion. Greatly outnumbered, Oglethorpe’s tiny army, including some Indians who respected him and regarded him as an honest friend, used deception and ingenuity to thwart this invasion. As Gaudi observes of the Spanish withdrawal: “Thus, a few hundred Spaniards lost on a hot day in a marsh on St. Simons Island in July 1742 had decided the fate of a continent.”

The Roots of Revolution

Gaudi also relates the history of “Gooch’s American Regiment,” which was named for their commander, Sir William Gooch, the acting governor of Virginia, and consisted of approximately 3,700 men who fought for the British. All those years ago, this was the first completely integrated military unit in American history, with their ranks boasting free blacks, slaves promised a release from bondage for fighting, Indian scouts, Irish “Papists,” and others.

From the first, the British looked down on these Americans, treating them with scorn and assigning them to menial labor. The colonials were regarded as slothful, and the use by the British of the term “American” seemed to insinuate disrespect. In this divide, Gaudi speculates that “in this scorn, perhaps, and in the unequal and cruel treatment parceled out to the soldiers of Gooch’s Regiment in 1741, lies the roots of the American Revolution a generation later.”

Another unforeseen outcome of the war had to do with the British military.

“The English learned from the disasters of this maladministered war in the West Indies. They learned preparedness and logistics and the absolute necessity of a unified command structure. They learned to win. Successful naval and military operations enabled them under Clive to dominate India at Plassey in 1757, and under Wolfe to take Quebec and Canada from the French in 1759, and eventually to bestride the world as an imperial colossus for the next hundred and fifty years.”

With his storytelling gifts, his skills as a writer, and his knowledge, Robert Gaudi, who is also the author of the highly acclaimed “African Kaiser,” has brought us an excellent account of a long-forgotten war. If someone in your family is a history buff, “The War of Jenkins’ Ear” might make the perfect holiday gift.