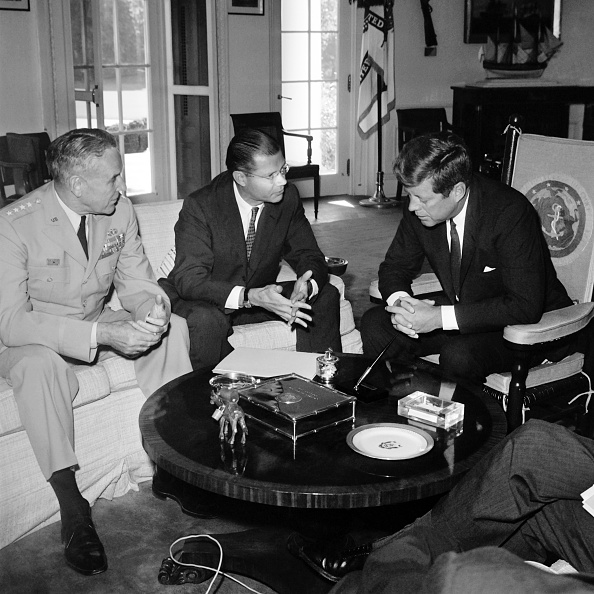 Book Review: ‘The Kennedy Withdrawal: Camelot and the American Commitment to Vietnam’

A thorough account of Kennedy’s struggle with Vietnam
BY Dustin Bass TIMESeptember 6, 2022 PRINT

There are many things we don’t understand and may never know about the Vietnam War. One of those things that we will definitely never know for certain is whether John F. Kennedy would have continued the war had he been reelected. In Marc J. Selverstone’s upcoming book, “The Kennedy Withdrawal: Camelot and the American Commitment to Vietnam,” readers will receive a thorough breakdown of just what Kennedy was considering during his fateful year of 1963.

There is plenty of speculation among historians, authors, and the general populace about exactly who assassinated Kennedy and why he was assassinated. Some speculate it was because Kennedy was planning a withdrawal from the war, something he mentioned in a public speech the month before his death.

What is a relief about the book is that Selverstone doesn’t delve into speculation. The reader is presented with the planning stages concerning the war, the creation of new military advisory groups (there are a lot of acronyms), the hounding by the press, the concerns with the Diem regime of South Vietnam, the constant progress and regress of the conflict, and Kennedy’s plan of withdrawal that died with him.

When Kennedy took office, the Cold War had been in full swing for 15 years. America was in a struggle with the Soviet Union, as well as communist China, for the advancement of democracy over communism. America had already fought one hot war to a standstill in Korea, but Southeast Asia—Laos, Cambodia, and Vietnam—were being pursued. Kennedy inherited an operation from the Eisenhower administration against Cuba that would become the Bay of Pigs fiasco. It would hover over the Kennedy administration moving forward.

After faltering against communism on the front door of the United States (Cuba), Vietnam presented an opportunity to push back against the specter of communism. This war in the Golden Triangle area of Southeast Asia proved anything but a golden opportunity.

Kennedy, along with his Secretary of Defense Robert McNamara, struggled to find footing with the correct level of escalation without escalating the war with American military force. It was escalation via an advisory position, and Selverstone points out how difficult that fence was to straddle. The administration also struggled with President Ngo Dinh Diem and his regime regarding how best to run the war.

The author discusses how the Kennedy administration attempted a coup of Diem in order to put someone else in his stead, but that attempt was unsuccessful. Diem, however, would later be overthrown by his own military. “The Kennedy Withdrawal” indicates just how difficult it is to dictate a war when someone else is fighting it. The reader will most likely get a sense that America had to either disassociate from the war or send in troops.

Fear and Loathing in Vietnam

Selverstone presents a government, Pentagon included, that was wary of what might happen if America withdrew from the fight in Vietnam. The fear was that “dominoes” (nations susceptible to communism) would fall if America showed reticence toward the communist threat.

Not only would there be falling “dominoes,” but other democratic nations would lose faith in America, the West’s greatest power. There was too much to lose in losing Vietnam. Unfortunately, according to Selverstone, gains were difficult to come by, and when gains seemed within reach, they often receded like a mirage.

The book is full of the frustrations that the administration must have felt working with the Vietnamese government, the Diem regime, and those that came about later via coups; the constant questions from the press, questions the administration too often did not have good answers for; the overly optimistic view from many advisers and military strategists, which often proved unrealistic; and the continual lies, lies unfortunately believed in earnest by those trying to win a war they weren’t officially fighting.

It is a frustrating book, not because it is not well-written or well-researched (it indeed is both), but because of the Kennedy administration’s indecisiveness on top of its poor decisions, and then how the whole situation went from bad to worse when Lyndon Johnson took over.

The most frustrating aspect is found in the title itself. Kennedy wanted a withdrawal. He wanted out, but he also wanted the South Vietnamese to win. The withdrawal was not an impossibility. The military advisers could have been withdrawn, but it would have been viewed as a concession to the communists, leaving the South Vietnamese to fend for themselves, along with other “dominoes.”

The problem was that Kennedy wanted to have his cake and eat it too, and one can hardly fault him for it. It was an inherited problem. Vietnam placed him in the middle of two options: another Korea or another Bay of Pigs. Stalemate or absolute disaster. Unfortunately, and more frustratingly, the latter happened without him.

It is difficult to say whether America would have stayed in Vietnam, even in its advisory role, had Kennedy not been assassinated and had won reelection. Selverstone’s book cannot come to an exact conclusion either, as that would be speculation on the author’s part. But the reader may come to the conclusion, as I did, that America would not have handled the situation as aggressively (to no avail) as it did if Kennedy had remained in office.

Selverstone’s work is an honest account that pulls from a vast number of sources that dealt with Kennedy and the war. “The Kennedy Withdrawal” doesn’t speculate on what might have been; those types of conclusions often only lead to more questions. What the book does do is provide clarity for the reader on what Kennedy was thinking and planning during those difficult thousand days.

Considering the Vietnam era was such a murky time, that clarity will prove helpful, if not pivotal, for readers on how they view Kennedy.

If anything, it helps to shine a light on a man who led in uncertain times, who inherited a host of uncertainties, and who was himself often uncertain about the right course of action.