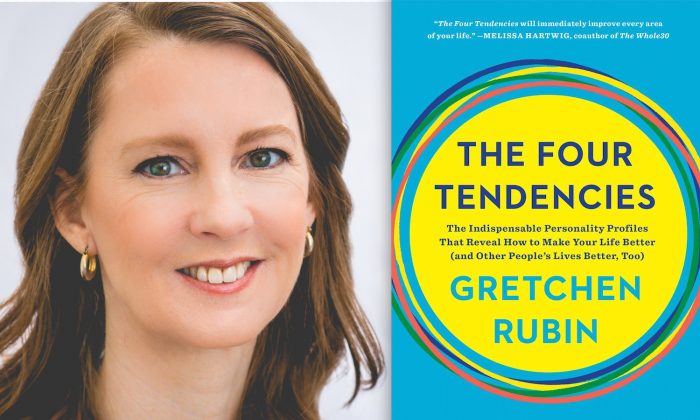 Gretchen Rubin, a former lawyer who clerked for U.S. Supreme Court Justice Sandra Day O’Connor, took the self-help world by storm in 2009 with her wildly popular book, “The Happiness Project—Or Why I Spent a Year Trying to Sing in the Morning, Clean My Closets, Fight Right, Read Aristotle, and Generally Have More Fun.”

Since then, Rubin has become an influential voice on habits, happiness, personal motivation, and self awareness. Her podcast, “Happier with Gretchen Rubin” consistently ranks at the top of the self-help category and her subsequent books, “Better Than Before—What I learned about Making and Breaking Habits to Sleep More, Quit Sugar, Procrastinate Less, and Generally Build a Happier Life,” and “Happier at Home—Kiss More, Jump More, Abandon Self-Control and My Other Experiments in Everyday Life” were both New York Times Bestsellers.

Rubin’s new book, “The Four Tendencies—The Indispensable Personality Profiles That Reveal How to Make Your Life Better (and Other People’s Lives Better, Too)” outlines her framework illustrating the four distinct ways she says people manage the outer and inner expectations they face throughout their lives. Based on this concept she originally outlined in her book “Better Than Before,”and has subsequently discussed frequently on her blog and podcast, “The Four Tendencies” aims to help people understand themselves and others better.

Rubin dives deep into The Four Tendencies, first introducing the framework and offering the reader a quiz to identify his or her tendency. Once categorized as an Upholder, Rebel, Obliger or Questioner, the entire contents of the book becomes relatable and applicable.

Meaty sections are devoted to each tendency, outlining their strengths and weaknesses and offering strategies to maximize the former and minimize the latter. Rubin also offers insight into managing, marrying, parenting, or otherwise relating to individuals with each tendency.

After taking the quiz and reading Rubin’s detailed description of my tendency (Obliger) I nodded my way from one sentence to the next, recognizing all too well the behavior patterns being described.

I suspect most readers will enjoy a similar experience, recognizing themselves and those closest to them within the pages of “The Four Tendencies” and will walk away with tools to operate more effectively having gained a better understanding of themselves and the people around them.

An interesting lens through which to view personality profiles, “The Four Tendencies” hits bookstores September 12.