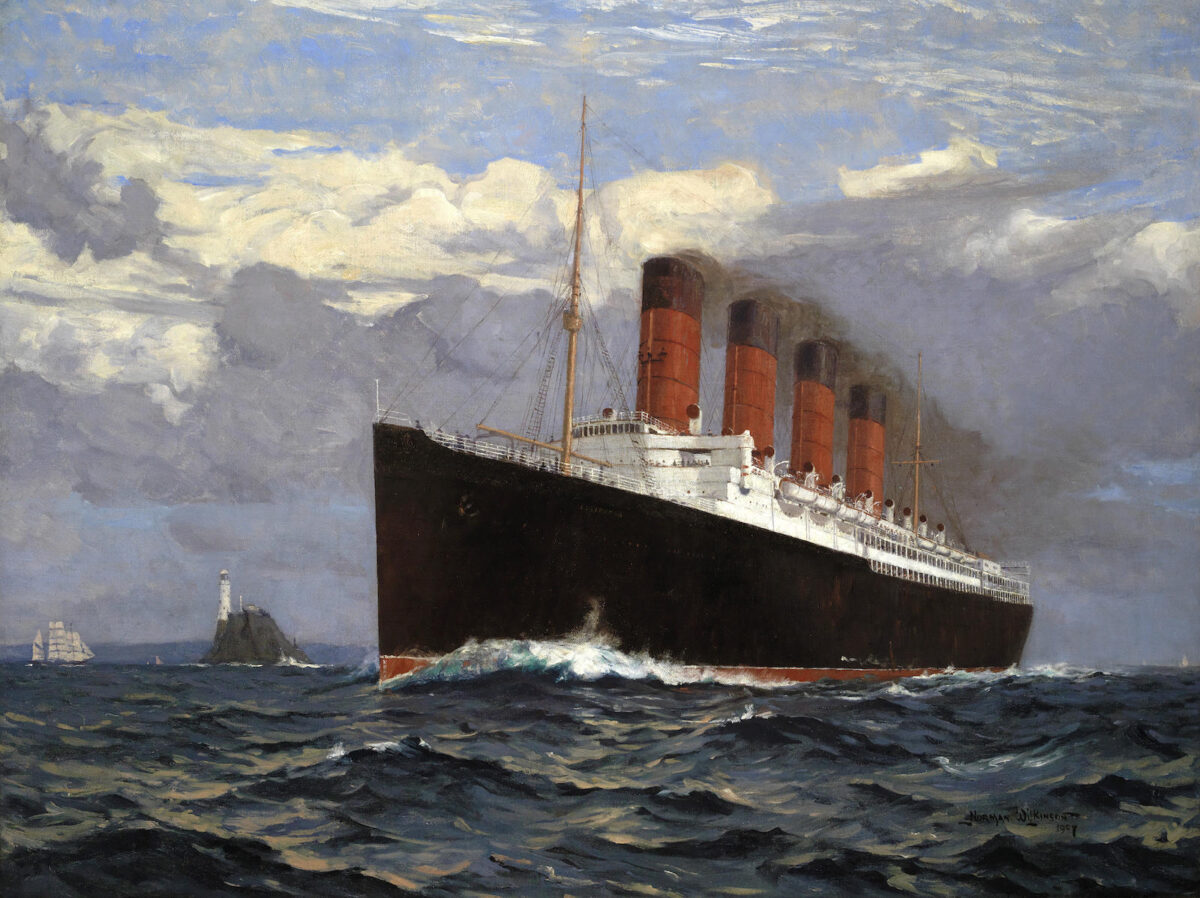 The sinking of the Lusitania by Germany in 1915 provoked some Americans to want to join World War I. “Luisitania,” 1907, by Norman Wilkinson. Oil on canvas; 30 inches by 40 inches. Bonhams. (Public Domain)
Books

A clash of decisions about entering World War I
BY Dustin Bass TIMEApril 21, 2022 PRINT

These studies are necessary for countless reasons, but Neil Lanctot has indulged readers—from World War I enthusiasts to geopolitical strategists to those concerned with the world’s current military crisis in Eastern Europe—with a different study. It’s a study of how three of America’s most influential leaders felt about getting involved in The Great War.

In his new book, “The Approaching Storm: Roosevelt, Wilson, Addams, and Their Clash Over America’s Future,” Lanctot follows The Great War from our side of the Atlantic Ocean and how it was viewed by President Woodrow Wilson, former president Theodore Roosevelt, and suffragist and pacifist Jane Addams. Lanctot chose these three not only because they were three of the most influential voices in America at the time but also because of how they differed, whether slightly or emphatically, with each other.

Lanctot does a masterful job of showing how Roosevelt and Addams started their relationship on the same page as part of the Progressive Party, how Wilson and Roosevelt could not be further apart (and their disdain for each other is made quite obvious), how Addams eventually became a supporter of the Wilson camp only to eventually be disillusioned when America entered the war, and how Roosevelt, for a short spell, was supportive of Wilson when the president asked Congress to declare war on Germany.

Addams’s disillusionment and Roosevelt’s support, however, does not come about until the end of the book, which follows those three years starting from the summer of 1914 to the spring of 1917.

Wilson is shown as a rather tragic figure, who truly desired to keep America out of the war. His continuous trials brought on by German submarine warfare, often unrestricted, made this military holdout very difficult, though not impossible. He is also shown as being distracted by personal concerns, especially as the war begins, with the death of his wife, Ellen, and during his period of infatuation with Edith Bolling Galt, his eventual second wife.

His reliance on Col. Edward House, who was never an official part of the government, remains an anomaly in governmental affairs, as House continued to play the go-between with America and the belligerent nations. House played the unofficial role of Secretary of State, which actually undermined the real secretary.

Wilson’s desire, and House’s as well, to be the ultimate peace-broker between the European nations guided many of his decisions, if not, as shown in the book, also clouded their making. Lanctot demonstrates that regardless of this leader often being distracted, he had influence over his own party, and much of the country backed him by keeping the country out of war while benefiting from the war economy.

For Roosevelt, it is made quite clear that, had he had his way, America would most likely have been in the war sooner than 1917, or at least a declaration of war would have been requested much sooner. Roosevelt is displayed as a man who viewed the loss of American lives by the sinking of merchant ships and cruise liners, like the Lusitania, as an affront to American sovereignty. Perhaps it was; there was plenty of debate to go around during that time (and indeed it did go around).

Though there were plenty of pacifists in the new Progressive Party, Roosevelt, as its head, inevitably was at odds with party members. Lanctot shows that Roosevelt was at odds not simply with Wilson and the pacifists but also with his former party, the Republican Party. He indeed wished to run again for the 1916 election, but the split between the Republican and Progressive parties sealed his decision not to run.

Roosevelt was firm on his stance of being prepared for war. The debate against and for war preparedness proved pivotal. As Roosevelt pushed and prodded for preparedness for what he considered the inevitable involvement of America, Addams refuted it, and Wilson was hesitant.

For Addams, the author shows an incredibly influential figure, despite this being years before the passage of the 20th Amendment instituting women suffrage. She was respected not only in the States but in Europe as well. Along with this respect for her intellectual abilities and her work in the suffrage movement, she was also despised by many who believed either that women should not be allowed to vote (this was not singularly a patriarchal perspective) or that pacifists were a danger to the nation, or both.

Her influence is evident in the fact that she often had the ear of many influential figures—in particular, Roosevelt and Wilson. She wished and worked for peace, and this work was often viewed skeptically, if not cynically, as “peace at all costs.” Lanctot demonstrates her defiance of this accusation. Yet once the Germans reinstituted unrestricted submarine warfare, and after the Zimmerman Telegram (the proposal from Germany for an alliance with Mexico against the United States) was uncovered, there was no halting preparedness and ultimately war. Lanctot does his diligence in showing that even some of Addams’s colleagues and fellow pacifists jumped ship, so to speak, and joined the war cause.

Lanctot has written an extensive work that is an enjoyable read. His book is a seamless narrative that moves from Wilson to Roosevelt to Addams, while also tying in figures like House, Henry Ford, the peace-movement leaders, foreign ambassadors, Wilson’s cabinet members, members of Congress, and journalists.

This study of what our leaders were considering during the months and years leading up to April 6, 1917, is a master class in political maneuvering. Lanctot demonstrates how these leaders formed alliances with groups and individuals, foreign and domestic; how they used letters, articles, and speeches to defend their views and dismantle the views of their opponents; how they utilized and used each other for their political and social purposes; and how being tied together by the thread of politics could never lead to binding unity.

Worthy of the World War I Library

As aforementioned, there have been numerous studies about World War I: its causes and its results. This book is worthy of being placed among the many necessary studies on the war. Much like “The Guns of August” is a necessary study of the destructive power of modern hubris, “The Approaching Storm” is a necessary study about political maneuvering during a time of crisis.

Lanctot’s book, though centered around the thoughts and views of American leaders, can provide insight to present and future politicians, and leaders across the globe on what can be expected from political enemies and allies alike.