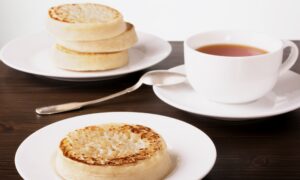 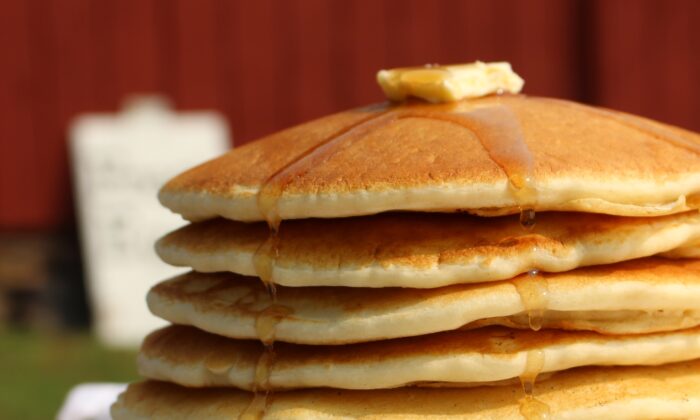 One of the premier comfort foods in existence, a warm stack of pancakes never fails to put a smile on one’s face. Sharon Collins, Charlotte Collins, and Courtney Wade tap into this feeling, with a side of nostalgia, in “Pancakes Make People Happy.”

The book contains over 75 different recipes for the pancake lover to try out.

Not only do pancakes evoke good feelings, they can also bring back childhood memories. When going through the book, I kept remembering how as a child, I would wake up on Saturday and Sunday mornings and watch my dad make pancakes. I can still see him mixing together eggs, milk, melted butter, sour cream, and pancake flour (his flour of choice was Duncan Hines), and then carefully pour the batter onto the griddle.

Each recipe in “Pancakes Make People Happy” is accompanied by an often mouth-watering photo of the finished product. The authors also have a strong personal connection to the subject matter. Each has an agricultural background, and the Collins family farm, located in Jefferson, New York, has been serving pancake breakfasts to visitors and guests on weekend mornings since 1995.

After a brief introduction and run-down on some basic cooking instructions, the authors get down to business. The book is divided into several sections, each taking a look at some of the different types of pancakes. The specific chapters examine everything from the so-called “classic” varieties (such as buttermilk or blueberry), to different seasonal offerings. “Seasonal” is defined as pancakes either with a holiday theme, or containing ingredients available only at certain times of the year: eggnog and pumpkin, for instance.

Some of the recipes’ introductions contain bits of historical trivia—apparently, buttermilk pancakes were popular with the ancient Greeks and Romans—which helps to add a bit of informative fun to the material.

A particularly interesting section deals with international pancakes, with selections from such places as Germany, India, Malaysia, China, and Scotland, among others. Another chapter lists pancakes that can (and do) double as dessert treats: tiramisu, cannoli, and sticky toffee.

There are also several entries that, as the authors admit, somewhat stretch the definition of just what a pancake is, but still manage to keep the core elements of the title food. (Blueberry Pancake Casserole anyone?)

In a nod to the fact that not everyone has the same dietary preference, the authors have made the very wise decision to include a general table of ingredient substitutions, offering replacements for such items as whole milk, butter, or sour cream, thus allowing any vegan who would like to try some of the recipes to do so.

At the same time, the authors stress the importance of not taking shortcuts while following any of the featured recipes. They point out how time-saving substitutions, such as using store-bought whipped cream, rather than taking the time to make it yourself, will make a real difference in how the final product turns out, and how it is received by others.

In a culinary nod to the environment, the authors stress the importance of using fresh, local ingredients whenever and wherever possible.

The recipes are ranked by the degree of difficulty; rankings range from one to four, with one being the easiest. The various steps that must be taken and the various types of ingredients that should be used are the determining factors in assigning each entry a specific number.

“Pancakes Make People Happy” definitely achieves its desired purpose. First, the authors present extremely enticing delights, and then they give the reader a guide to try their hand at making them themselves.

Try these recipes from the book:

Judd Hollander is a reviewer for StageBuzz.com and a member of the Drama Desk and Outer Critics Circle.