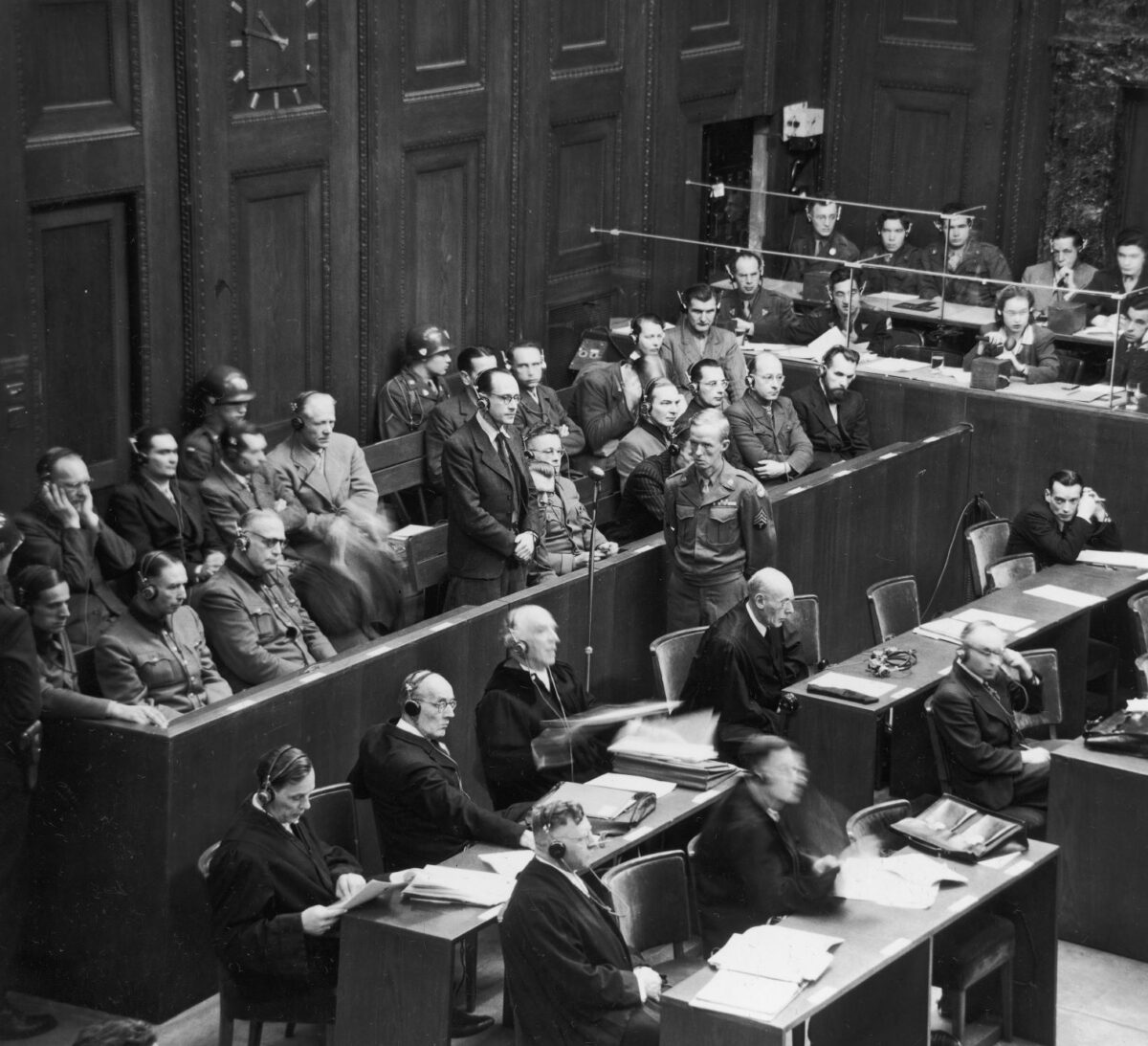 The Nuremburg Trials, circa 1945. The Nazi industrialists were given a slap on the wrist at the trials, according to author David De Jong. (Fotosearch/Getty Images)
Books

A Call for Accountability for a Ruthless Past
BY Dustin Bass TIMEMay 11, 2022 PRINT

More than 75 years removed from the greatest military conflict in human history, there is so much to remember. Unfortunately, there is so much forgotten. David de Jong has written a book, “Nazi Billionaires: The Dark History of Germany’s Wealthiest Dynasties,” in hopes that the world may not forget the families who enriched the Nazi regime and also enriched themselves.

World War II catapulted America out of the Great Depression and into a thriving postwar economy. The country was the manufacturing hub for the Allies. Prior to the onslaught of World War II, Germany began its push for rearmament. Its methods, however, were counter to America’s, aside from its being against the Treaty of Versailles.

De Jong discusses in detail how Adolf Hitler and Nazi Party officials, like Joseph Goebbels and Heinrich Himmler, began their political conniving with some of Germany’s wealthiest industrialists even before they had officially taken complete political power. Donations were met with promises from the future regime—promises of immense profits and security from competition.

One of the questions de Jong tackles is the issue of necessity. Since these industrialists were already uber-wealthy, and they were working against limited competition (Germany was in the throes of a poor economy as well), why would they need to pour money into a political movement?

On the surface, it appears to be merely “go along to get along.” In fact, this was a common excuse relied upon by those very industrialists during the Nuremberg trials. De Jong proves, however, that it was something much more sinister than that.

The names of these industrialists are practically unknown to the American populace, except for Porsche. Names like Quandt, Flick, Oetker, and von Finck are rather unrecognizable. Some of their businesses, however, are slightly more recognizable: BMW, Allianz, and IG Farben.

Wealthy industrialists are wealthy and industrial because they know when to make profitable moves. The idea of profit is not at issue in de Jong’s book. It is the method by which these wealthy industrialists multiplied their wealth. In disturbing detail (disturbing from a business perspective), the author discusses how these business owners utilized the ongoing pogroms against Jews to benefit themselves.

Through the process of “Aryanization,” Jewish business owners and stockholders were forced out of their positions and shareholdings. With the threat of impoverishment, concentration camps, or immediate death, Jewish businessmen sold their businesses and shares typically well below fair market value. But in Nazi Germany there was no recourse. It was “submit and leave or suffer the consequences” of remaining in Nazi Germany.

Once these German businessmen swindled their way to full ownership or majority shareholder, they further increased profit margins by utilizing forced and slave labor, often pulling people from concentration camps. Many of these people died as they worked. All of them endured cruel conditions.

De Jong presents the reasons why these men conducted themselves so ruthlessly. He quotes from their defenses at the Nuremberg trials, and also from their correspondences to their lawyers and others. Now that Hitler was dead and the Nazi Party defeated, it was understandable for these industrialists to retreat toward ignorance and claim being under the Nazis’ thumb. De Jong, however, proves otherwise by producing the correspondences from before the war ended, and before it appeared that the Nazis were on the losing end.

The reasons conveyed by the Porsches, Quandts, Flicks, Oetkers, von Finks, and their ilk do fall flat. But those patriarchs (matriarchs as well) eventually passed away, and that wealth transferred to the heirs. The heirs of that German wealth have hidden their families’ complicity with the Nazi regime. It was often hidden so well that some of the current heirs, the grandchildren, were unaware of their grandparents’ involvement. For some, it is an unfortunate past. For others, it is regrettable. A few, irredeemable.

What Is Being Done?

De Jong points out that some element of reconciliation with the past is being undertaken. Donations are made. Compensation is given to families. In the grand scheme of how much was profited (billions) by so few (a handful of families) and how much was taken (everything) from so many (Jewish business owners, prisoners of war, and others), the book shows that in many ways it is too late and most definitely too little. But this leads to another question: How much is enough? How does one quantify the necessary compensation? Is that even possible? De Jong doesn’t approach that topic, and perhaps that is wise.

The current issue is almost equivalent to that which was the immediate postwar issue. Germany was left in the hands of the Americans, the British, the French, and the Soviets—three capitalist democracies and a communist nation. Germany was split in two: East and West. The Iron Curtain had been drawn, and the West had to figure out how to best offset the influx of communism. The hot war was now the Cold War, and Berlin was the dividing line between democracy and communism. The Allies decided to move forward against a now common enemy, the Soviets, and move past a defeated enemy, the Nazis.

In most instances, the Nuremberg cases against these industrialists resulted in little more than a slap on the wrist. These elites eventually returned to their business dealings, having spent perhaps a few years in prison. Again, in the grand scheme, the punishment hardly lives up. But what should have been the decision? Were there other viable options? Should the Allies have stripped the industrialists of their corporations and factories; or handed them over to the guiltless German entrepreneurs (if there were any); or installed German-speaking benefactors from the Allied nations, such as France, Britain, or America; or simply destroyed whatever was left of the German industry and call it even?

It is a question, among many other post-World War II questions, that will haunt the world still further into the future. Regardless, those who were directly involved are now gone. Some have been gone for decades. Some only recently passed. But requiring personal and direct retribution is not the goal of de Jong’s work. Rather, it is about shining a spotlight on the names of these families and their businesses to ensure the world remains aware of how they collaborated and profited from the Nazi regime.

De Jong does not write with anger, but rather with a sense of perplexity. His perplexity, however, is our perplexity. The same emotion that comes from the writer infects the reader. It is this perplexity that causes us to ask: “How could these people do this? And secondly, how can the heirs act almost flippantly about it?” The author is not asking the heirs to embrace their past to the point of self-loathing, but rather to at least acknowledge their families’ history in a manner that is honest.

This leads us to another question. How long should this dark historical cloud hang over these families? Will it be enough for this generation? Perhaps the next? A hundred years from now? What is clear is the demand that the cloud not dissipate until proper rectification is made, and that begins with owning up to a most ruthless past.

De Jong has done his homework with this book. Then again, he had been doing his homework well before he began writing it, as he had been covering such topics for Bloomberg News. The book is written in chronological form, starting from before the outbreak of war, while there were hostilities toward the Jews of Germany, and then moving from the founding generation to the children and then the grandchildren.

De Jong makes convincing arguments about the guilt of these families, a much more guilty verdict than that handed down by the Nuremberg judges. Regarding guilt, I found it difficult to rely on his primary source for the Quandt patriarch’s guilt, as that was Goebbels. A more sinister man can hardly be found, not to mention that he was the Nazi Party’s Minister of Propaganda.

Overall, it is a powerful read that demonstrates how greed can create a wealth of evil and how not dealing with the demons of the present only condemns the future generations to exorcising them.