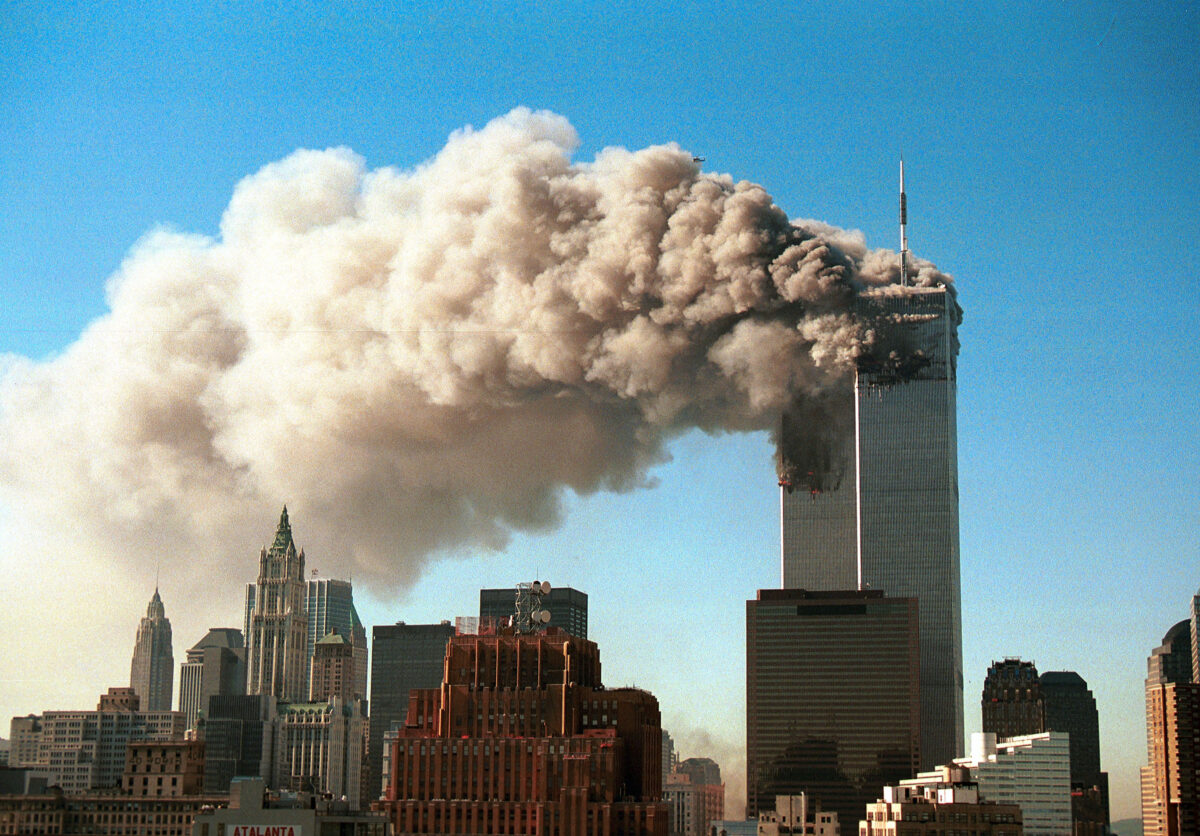 Smoke pours from the twin towers of the World Trade Center after they were hit by two hijacked airliners in a terrorist attack September 11, 2001 in New York City. (Robert Giroux/Getty Images)
Books

On Sept. 11, 2001, I was working as a reporter for a local newspaper in Warrenton, Virginia (Fauquier County), roughly 45 miles west of Washington. The television was on in the conference room and the staff started to gather as we watched a plane slam into one of the Twin Towers in New York. Aghast, we initially thought the plane had accidentally gone off course.

It wasn’t long before we learned that it had been a terrorist attack. It was part of a series of attacks carried out by the militant Islamic group known as al-Qaeda. Another target was the Pentagon in Arlington, Virginia. With so many commuters living in Fauquier County and working in the D.C. area, the phones started ringing.

For most Americans, this was a first. These kinds of horrific events happen in other places in the world, not the United States. But, for those working in counterterrorism, the events on Sept. 11, 2001, was a nightmare come true.

On the Front Line

In Fred Burton’s “Ghost: Confessions of a Counterterrorism Agent,” his memoir takes readers from the mid-1980s through the 1990s, when he signs on as a counterterrorism agent with the Diplomatic Security Service, a branch of the U.S. Department of State. His experiences give a chilling account of the behind-the-scenes operatives and the perilous nature of their work.

Fresh out of training and, before that, his time as a policeman in Maryland’s Montgomery County, Burton’s inauguration into his profession included going through reams of files. His assignment area was the Middle East. Within days, he was learning about the persons and plots that threatened to undermine the security of the country’s leaders and average citizens. He quickly realized that it was all happening at breakneck speed. He felt overwhelmed from the first day.

Burton’s workday “to do” list included handling reports, like: “Sedan with Libyan tags tailed a busload of American schoolkids in South America,” or, “Two more bombings, one in Bangkok, the other in Stockholm.” The pace was frenetic. Sometimes, they were able to thwart disaster. At other times, they were caught off guard.

Hostages were taken. Some died. Some were eventually released. Burton was touched by the Catholic priest, Fr. Lawrence Jenco, who suffered much at the hand of his captives yet bore them no malice. He was in captivity for 564 days before his release.

Lt. Col. William Francis Buckley was kidnapped in 1984 while serving as CIA station chief in Beirut. He had a stellar list of military accomplishments and honors. Several government agencies sought his whereabouts, but by 1985, he was dead. His body was ultimately returned to the United States, where he was given full military honors at Arlington National Cemetery.

Readers will be drawn into the complex world of violent religious extremism that spills from Middle Eastern cities into many corners of the world. And then, there is the world of the informants and the measures needed to test their credibility and motives. Burton found himself in sordid, shady motel rooms or empty, open-air construction sites to question potential sources. With little sleep and often exhausted physically, mentally, and spiritually, Burton clung to his staunch determination to make a difference and to do his part to help protect the country he loves. It was not a job for the faint of heart. It took its toll.

Burton doesn’t shy away from expressing his views on the politics of pursuing the “bad guys.” Strategically, agencies would seem to be on the same page, but tactically, they each have their own agendas. The Central Intelligence Agency (CIA), the Federal Bureau of Investigation (FBI), Diplomatic Security Service (DSS), The International Criminal Police Organization (Interpol)—how did these agencies effectively collaborate or did they not? What was at risk?

At one point, Burton expresses his angst: “Counterterrorism investigations have become freighted with huge political baggage. Turf wars between the FBI, the CIA, and the Department of Justice have soured relations across the board.”

One of Burton’s successes included catching Ramzi Yousef, the mastermind of the 1993 truck bombing of the World Trade Center, the 1994 bombing of Philippine Airlines Flight 434 (flying Cebu to Tokyo), and a co-conspirator in the Bojinka plot to simultaneously detonate 11 U.S. airlines. There was a $2-million bounty on his head. Money talks and informants started coming out of the woodwork for cash. While the FBI was ultimately given credit for his capture, Burton and his team at DSS were heavily involved. Yousef was taken into custody in Pakistan in February 1995. Today, he is still serving a life sentence at a super max or control unit federal prison near Florence, Colorado.

Burton doesn’t pull any punches in this riveting and bone-chilling memoir. Published nearly 15 years ago, readers get an insightful historical perspective, and, perhaps, a present-day jolt into one of America’s most pressing, ongoing struggles of combating terrorism.

Anita L. Sherman is an award-winning journalist with 20 years’ experience as a writer/editor for several Virginia publications. A bibliophile, film noir fan and Blackwing pencils devotee, she loves the stuff of stories. Reach her at anitajustwrite@gmail.com