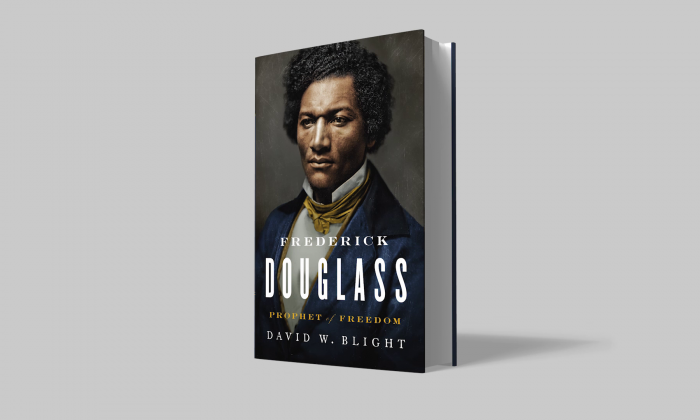 An extraordinary biography, “Frederick Douglass: Prophet of Freedom” by David W. Blight seems to have captured Douglass’s mind and heart as well as another human being can. And, like his subject, Blight has a real gift for the written word. This book truly inspires by attesting to the fact that one person, no matter how humble his or her beginnings, can change the world.

Blight states that he would not have written Douglass’s biography if he had not encountered the private collection owned by Walter O. Evans of Savannah, Georgia. Evans’s collection, as well as recently discovered issues of Douglass’s newspaper, provided new insights for Blight into the final third of Douglass’s life. Because of this archived material, Blight believes he has written the fullest account of Douglass’s life.

The first part on slavery will mesmerize readers with its graphic descriptions of oppression. Douglass was born the slave Frederick Augustus Washington Bailey in 1818, on the eastern shore of Maryland.

Separated as an infant from his slave mother (he never knew his white father), Frederick spent his early years with his grandmother on Captain Anthony’s plantation. At the age of 6, Douglass was moved away from his grandmother to live and work on the Wye House plantation in Maryland. Then Douglass became the possession of Thomas Auld, Anthony’s son-in-law. When Douglass was 8 years old, his owner sent him to Baltimore to live as a house servant with the family of Hugh Auld.

Hugh Auld’s wife defied state law by teaching the boy to read, that is, until her husband declared that learning would make him unfit for slavery. She stopped, but Frederick had already learned his first life lesson: Knowledge is power.

Douglass worked on educating himself in any way possible. He was deeply influenced by white ministers’ preaching and taught himself oratory from sermons and books while developing a strong personal faith.

When Douglass was 15, he was sent back to Thomas Auld, a stingy master who underfed his slaves. Auld thought that Douglass had become spoiled in the city, and so he dispatched Douglass to Edward Covey, a notorious slave-breaker. Douglass was regularly whipped and brutalized by Covey.

Douglass, nearly broken psychologically, said of that time, “My intellect languished, the disposition to read departed.” Douglass finally rebelled against the beatings when he would no longer let himself be treated as an animal. After Douglass won a physical confrontation, Covey never tried to beat him again.

Douglass made two escape attempts before he was assisted in a successful route to the free states by Anna Murray, a free black woman in Baltimore, whom he later married.

The second part of the book shows the bittersweet quality of freedom. Douglass had escaped slavery with extraordinary bravery, but he was still a fugitive slave. He changed his last name from Bailey to Douglass.

Soon Douglass became an abolitionist and spoke and wrote about his slave years, creating clear and dramatic scenes in the reader’s mind about the institutionalized system. Blight’s book contains Douglass’s vivid accounts of the torturous abuse, blatant hypocrisy, and ravenous murder inherently fostered by the system.

Although Douglass’s gifted insights shed light on the moral delinquencies of American slavery, he remained fair and just toward his own oppressors.

The book also describes how Douglass publicly condemned the support and enablement of slavery by American churches.

To spread his story and assist the abolitionist cause, as well as to counter early charges that someone so eloquent as he could not have been a slave, in 1845 Douglass published “The Narrative of the Life of Frederick Douglass.”

At this point, because personal details were revealed in this account, Douglass left the United States and spent nearly two years traveling in Ireland and Great Britain, speaking for the abolitionist cause.

On his first trip to Ireland, Douglass made important points for the abolitionist argument. He spoke about how slavery was much worse than oppression, which was simply taking away rights or property. Slavery, on the other hand, was belonging, body and mind, to someone else.

Douglass was encouraged to settle in England because his fame made it risky for him to return to the United States, where federal law gave his slaveowner the right to seize him. Two of his English friends, however, raised the money and bought his freedom.

At the age of 28, Douglass finally became a free man and returned to the United States.

During the Civil War

The third part of the book describes how Douglass became a Republican. The party, founded in 1854, had the stated mission of stopping the growth of slavery into the western territories. By 1860, all the elements for Southern secession were in place, and the election of Abraham Lincoln ensured it. Lincoln made the decision to fight secession since he felt the union of the states must be preserved at all cost.

Douglass saw the Civil War as a battle over slavery. He played a critical role in convincing President Lincoln that blacks should be allowed to fight for their own freedom and in defense of their country.

During Reconstruction and Beyond

The last part of Blight’s book is quite interesting because it describes Douglass’s work as a political insider rather than an outsider. Yet during this period, Douglass struggled with conflicted feelings, for although he had tirelessly labored to end slavery, true equality remained out of reach.

Despite the successful passage of several constitutional amendments and federal laws after the Civil War, unwritten rules and Jim Crow laws continued to curtail the rights and freedoms of blacks. Douglass denounced the Jim Crow laws yet, at the same time, held several government posts.

On Feb. 20, 1895, the nation lost a famous and passionate leader when Douglass succumbed to a heart attack. However, many of Douglass’s thoughts and words remain relevant today: the equality in the eyes of the law of all people, the importance of education, the importance of the Constitution, and the virtue of self-reliance.