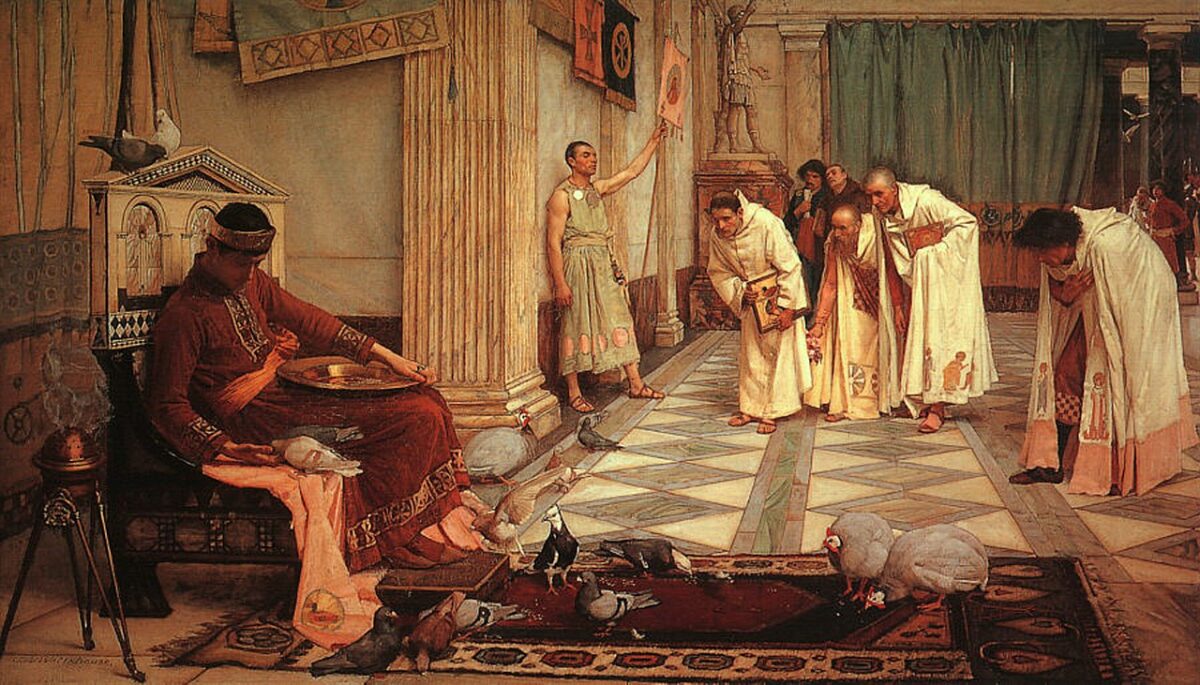 "The Favorites of the Emperor Honorius," 1883, by John William Waterhouse. During his reign Rome was sacked for the first time in 800 years. (Public Domain)
Books

A master storyteller brings us the fall of Rome
BY Dustin Bass TIMEAugust 8, 2022 PRINT

Don Hollway has followed his debut book, “The Last Viking: The True Story of King Harald Hardrada,” with an absolutely fascinating read: “At the Gates of Rome: The Fall of the Eternal City, AD 410.”

Hollway has shown himself to be a true storyteller in the realm of history, and in this new book, he truly shines. The book describes in vivid detail what led to the sack of Rome by the Goths in 410 by taking the reader back more than 30 years before that event takes place.

He begins with the significant year of 378, when Valens, emperor of the Eastern Empire, is killed in the Battle of Adrianople against the Goths. The author shows not merely his knowledge of history but also his understanding of historical context.

The book revolves primarily around two figures: Stilicho and Alaric, both of barbarian descent. Stilicho rises through the courts of Rome, while Alaric becomes king of the Goths. Although resented by high-ranking Romans, Stilicho remained loyal to Rome.  Once an ally of Rome, Alaric helped to defeat the Franks but even as a Roman citizen was given little recognition and turned against the Empire.

Despite Stilicho’s and Alaric’s advancements to power, the Romans hold their barbarian blood against them, allowing them to rise only so far and always viewing them with suspicion. Hollway follows their battles, their struggles, and their political and social maneuvers.

Hollway guides the reader toward the inevitable, through a society of intrigue, suspicion, betrayal, and murder. We meet important people who reigned, usurped, fought, and died in or for Rome.

The author is also a tour guide through the city of Rome and the surrounding cities and landscapes of Italia (Roman Italy). The reader ventures through its architectural beauties, like the basilicas and temples, where Christianity and paganism converged.

Despite the beauty and the many historical figures, the author hoists Stilicho and Alaric above them all. Just as a novelist hopes to attach the reader to the protagonist, Hollway conjures emotional attachments to his primary subjects.

More Than the Protagonists

Indeed, it is the injustices done to both Stilicho and Alaric throughout the book that ties them together and ties the reader to them. This is not to say that they were one and the same. Hollway points out numerous times that they differed.

They were leaders of men, true, but their power came from varying reasons: “Men followed Stilicho because he was in command. Alaric was in command because men followed him.” As the story progresses and we are given more insight into these figures, we see that they both were worth following.

Aside from Stilicho and Alaric, we witness the end of the Roman emperor Theodosius’s reign and the ultimate, though not meteoric, rise of his sons Arcadius and Honorius; perhaps “mediocre” is more fitting. We see the struggles for power by Flavius Rufinus, who was the Praetorian prefect of Eastern Rome; Olympias, the unscrupulous minister in the Western Empire under Honorius; and others, all ultimately brought down, and often violently. Hollway pulls in commentary from contemporary Roman historians Claudian, Orosius, Zosimus, as well as St. Jerome of Stridon and St. Augustine of Hippo.

There is the ongoing struggle for superiority over Rome between those who continued to believe in the pagans gods and those who believed in the Christian God, where promises to reinstate paganism or tear down the remnants of paganism are tossed about by power players.

Women, like Eudoxia, Serena, and Maria, play prominent roles throughout the story, from birthing future emperors to proposing tactical religious and political moves to the power players.

The moving parts in Rome during the end of the fourth century and the beginning of the fifth century are endless, but Hollway does a masterful job of not letting those movements derail the story.

Hollway shows, during this time of the Western and Eastern empires,  just how unstable power was, whether for generals, advisers, or emperors. There are countless skirmishes between Romans and Goths, Romans and Gauls, Romans and Huns, Romans and Romans.

With every skirmish comes a betrayal, with every betrayal comes an execution, and with every execution the story moves closer toward the inevitable invasion and sack of Rome.

The political instability that was the Roman Empire paints a picture of just how fraught the Eternal City was with problems. Hollway was right to refer to Sir Edward Gibbon, the author of the classic “History of the Decline and Fall of the Roman Empire,” at the start of his epilogue:

“The story of its ruin is simple and obvious; and instead of inquiring why the Roman empire was destroyed, we should rather be surprised that it had subsisted so long.”

The author drives this point home by showing, rather than telling. There is an immense amount of perfidy across the empire as well as ingratitude to those who struggled so mightily to hold the empire together, none more so than Stilicho.

Ultimately, Hollway brushes away the many theories and summations for the empire’s fall. “The direct cause of the fall of Rome is, of course, obvious: the invasion of the city by a barbarian horde.”

To say that the topic of the book is the fall of Rome would be accurate, but also an understatement. “At the Gates of Rome” is so much more. After reading this book, you may feel that the fall of Rome seems less like revenge, even less like a tragedy, and more like a moment of justice. It is a multifaceted story about empire, humanity’s basest instincts, and how the motives of the powerful often lead to the suffering of the weak.

For those who love the subject of ancient Rome, this book is a must-read. For everyone else, I would find it hard to not call this a must-read. It is a fascinating story written by a great storyteller. Furthermore, it provides incredible insight into why Rome fell in 410, and into the motivations of those who led that invasion.