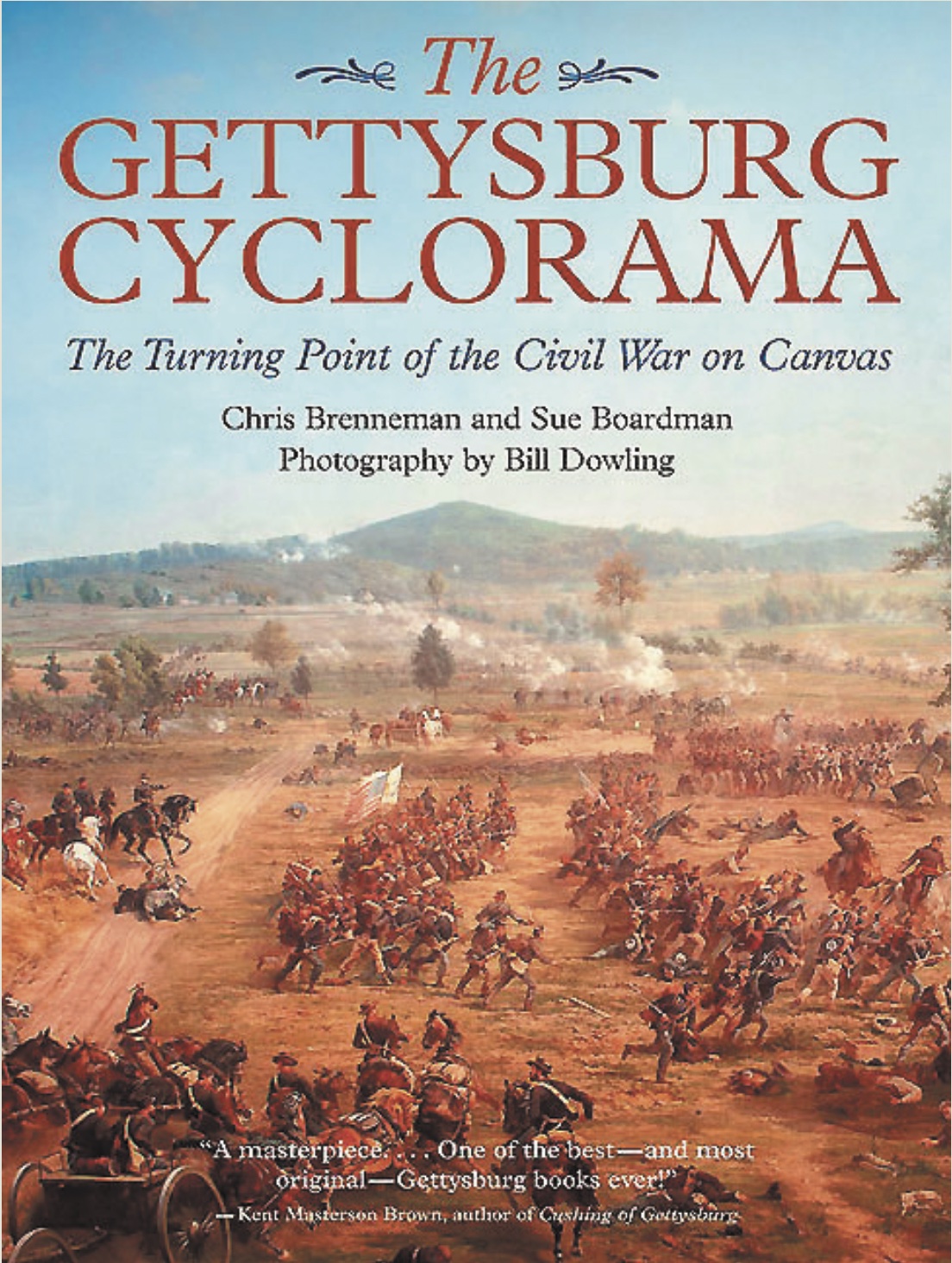 “The Gettysburg Cyclorama: The Turning Point of the Civil War on Canvas” by Chris Brenneman and Sue Boardman (Savas Beatie, 2015).
American Essence

Book Recommender: ‘The Gettysburg Cyclorama,’ Discover the Story Behind the Most Iconic Painting of the Civil War Battle

A fascinating history book delves into an iconic painting that visually depicted the minutiae of one of America’s worst days
BY Deena Bouknight TIMEAugust 18, 2022 PRINT

“Life imitates art far more than art imitates life,” penned Oscar Wilde in an 1889 essay, “The Decay of Lying.” Yet “The Gettysburg Cyclorama: The Turning Point of the Civil War on Canvas” is one exception. The book’s writers, Chris Brenneman and Sue Boardman, who have worked as licensed guides at the Gettysburg National Military Park in Pennsylvania, acknowledge that there have been thousands of books written about the worst battle of the Civil War, with 51,118 casualties over three days. However, this book uniquely scrutinizes the battle from an artistic angle, specifically through Paul Philippoteaux’s immense, 19th-century cyclorama painting, “The Battle of Gettysburg.”

In a succinct, approachable style, the book’s writers first provide background about the events of July 1 to 3, 1863, when 30,000 Confederate forces crossed into Pennsylvania from Virginia to fight 20,000 Union forces, with the final battle on July 3 being America’s bloodiest. Although black and white photography was by the 1860s a more commonplace medium, it was the trend toward oil-painted cyclorama during the late 19th century that served to document in intense color and detail the physicality of precise battles.

Before focusing on the logistics involved in creating the 377-foot-long, 42-foot-high, 12.5-ton cyclorama, the book’s writers present research, illustrations, and historic photographs to convey the popularity of that pre-television form of entertainment.

But the bulk of the book articulates the immensity of Philippoteaux’s preparatory task. In the 1880s, he interviewed Gettysburg citizens and veterans, hired a photographer to shoot the battlefield site in order to achieve accurate scale, and spent time analyzing and sketching artifacts. Each directional “view” of the 360-degree painting was photographed for the book by Bill Dowling, and each serves as an individual chapter that includes historic and modern battlefield photos; an informational key for learning the who, what, and where of the battle scene; and enthralling commentary about the events unfolding in the painting.

The book’s writers learned that Gettysburg veterans flocked to see the painting when it opened in Chicago in 1883. Some wept. And when the painting was moved for a time to Boston, “The Sunday Globe” shared on December 30, 1884: “You see spread out before you the battlefield so vivid and lifelike.”

While viewing the actual cyclorama in the Gettysburg museum is not necessary to appreciate the monumental undertaking to depict a significant time and place in American history, the experience—especially after reading this book—is one of stepping back to grasp the enormity of that day.

“The Gettysburg Cyclorama: The Turning Point of the Civil War on Canvas” by Chris Brenneman and Sue Boardman (Savas Beatie, 2015).