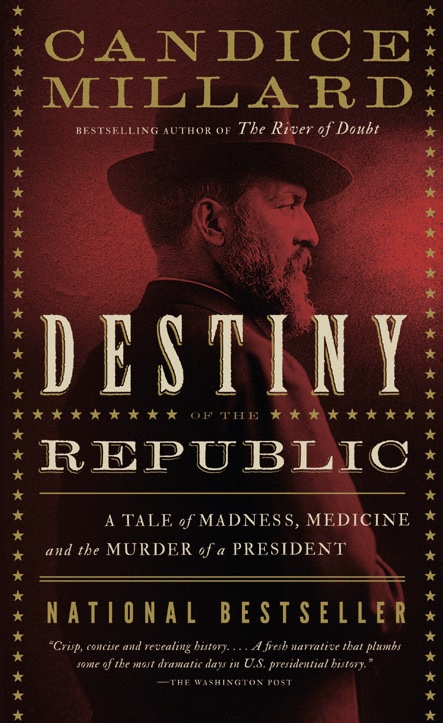 “Destiny of the Republic: A Tale of Madness, Medicine and the Murder of a President” by Candice Millard (Doubleday, 2011).
American Essence

Adversity led to innovations when leading inventors and medical scientist were tasked with removing a bullet from inside the wounded body of President James Garfield.
BY Deena C. Bouknight TIMESeptember 16, 2022 PRINT

In 21st-century modernity, air conditioning, antiseptics, and ultrasound are commonplace. Yet the three were hardly dreamed of in the late 19th century. Proving that necessity is the mother of invention, scientists and inventors worked round the clock for 80 days to provide both comfort and lifesaving measures for the suffering, newly elected president, shot by a political wannabe who was mentally unstable.

In Candice Millard’s book “Destiny of the Republic: A Tale of Madness, Medicine and the Murder of a President,” the author allows readers to delve into fascinating, investigative research that spotlights the seemingly providential coming together of great minds.

The anything-but-dry approach to this historical snapshot juxtaposes the “unremarkable figure” of murderer Charles Guiteau with James A. Garfield, a man who “defied all odds” to become the 20th president. Millard shows us Guiteau’s delusional thinking and what led him to take revenge on Garfield, who was waiting at D.C.’s Sixth Street Station with not only two of his sons, James and Harry, but ironically with Secretary of War Robert Todd Lincoln, whose father was assassinated 16 years earlier.

The book profiles Garfield’s extreme path from rural rags to “wunderkind scholar” to Civil War general to well-supported politician. And then it gives us a glimpse of Alexander Graham Bell’s “first incentive to invention” that earned him a place in the history books for bringing about the telephone, due to his almost fully deaf mother. He used the same concept of “induction balance” to develop a rudimentary metal detector, which he used to search for the bullet in Garfield’s abdomen. In the chapter titled “All Evil Consequences,” Millard writes: “The telephone, [Bell’s] most famous and frustrating invention, would ‘announce the presence of the bullet.’”

Millard also presents surgeon and medical scientist Joseph Lister, who had established antiseptic theories that opposed the standard thinking of the day—that “invisible germs” causing infections was “ridiculous.” At the time, Lister introduced methods to prevent germs from entering a wound by creating a chemical antiseptic barrier, but Garfield’s White House physician, Willard Bliss, was determined to “avoid at all costs” any “dangerous new ideas.”

Thus, during an oppressively hot Washington, D.C., summer, Garfield’s body filled with infection while Bliss and other doctors poked around to find the bullet; and Bell fine-tuned his metal-finding device while Navy engineers rigged up the president’s sick room with one of the first air conditioners by blowing air over a large box of ice.

All in all, the captivating “Destiny of the Republic” reveals how tragedy set into motion ideas that would become not only vindicated, but venerated.

“Destiny of the Republic: A Tale of Madness, Medicine and the Murder of a President,” by Candice Millard (Doubleday, 2011).