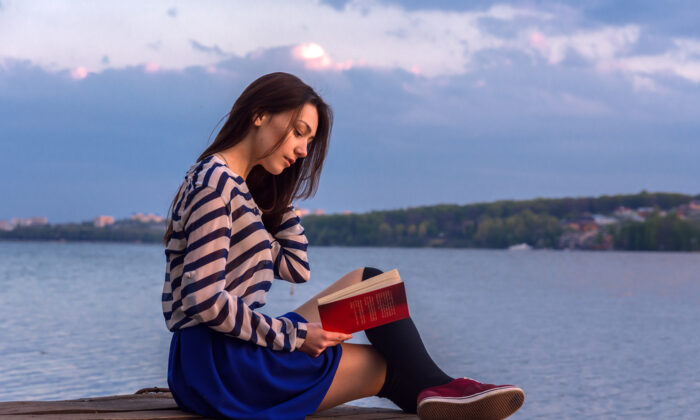 What books did your teen’s school include on its summer reading list? (Romanets / Shutterstock)
Literature

Book Lists: What Our Students Are Reading and Why It Matters

So there I was at the Outer Banks of North Carolina late this summer, ensconced like a prince in the house of my friend’s brother. The weather was muggy but clear, the food and the conversation plentiful and nutritious, the pace of life slow and sweet. For four days, I went nowhere outdoors but the beach, the front porch, the patio, the swimming pool, and an outdoor shower, and never once put on a mask, which for me was a pandemic record. The online sites I daily visit were abuzz with news, but these pieces, most of them unread by me, were no more a pest than the yappy little dog next door.

Life for a change seemed as bright as a tidewater sun.

Then a casual conversation led me to investigate the summer reading lists at some of our elite private schools.

Ninth graders at the Potomac School in MacLean, Virginia, were to select one book from a list featuring such titles as “The Hate U Give,” “I Am Not Your Perfect Mexican Daughter,” and comedian Trevor Noah’s autobiography “Born a Crime.” Only Anne Frank’s “The Diary of a Young Girl” might be considered a classic. Though rising 10th graders were assigned “Cry, the Beloved Country,” which I once taught, English 11 students had a choice of four books: Chang-rae Lee’s “Native Speaker,” Julia Alvarez’s “How the Garcia Girls Lost Their Accents,” Junot Díaz’s “The Brief Wondrous Life of Oscar Wao,” and Chimamanda Ngozi Adichie’s “Americanah.”

Because I have read and taught F. Washington Jarvis’s “With Love and Prayers,” a collection of addresses he delivered to Boston’s Roxbury Latin School, I have long felt an abiding affection for that institution. In these talks, the headmaster gave wise advice about life and virtue to his students and readers alike, and I was certain the young men of that school must be reading inspirational material.

Not so. That ship has left the dock.

The Roxbury Latin reading list for the summer of 2020 might serve as a template for a course in brainwashing. Every week, the makers of this list required their students to watch videos or listen to podcasts on racism in America, and to read short articles with titles like “White Privilege: Unpacking the Invisible Knapsack” and “What White Children Need to Know About Race.” Students were also required to read Robin DeAngelo’s “White Fragility,” Ta-Nehisi Coates’s “Between the World and Me,” and Ibram X. Kendi’s “How to Be an Antiracist.”

Middle of the Road

Some schools I looked at offer a less lopsided and more eclectic list. Deerfield Academy, for example, gave its 11th-grade students the option of reading not only contemporary writers, but also such well-known American authors like F. Scott Fitzgerald, John Steinbeck, and Sylvia Plath. As I skimmed these titles, however, I realized that very few authors from the 19th century or earlier, writers like Mark Twain and Nathaniel Hawthorne, were in supply. Only Stephen Crane with “The Red Badge of Courage” and Edgar Allan Poe short stories made the cut.

When I stumbled across Richmond’s Saint Mary’s Catholic School, which does not belong to America’s elite private schools, I found at last a more balanced selection. Eighth graders must choose one book written by contemporary authors and must also read a classic like “Around the World in Eighty Days,” “Little Women,” or “The Adventures of Sherlock Holmes.”

When I taught literature and history to seminars of home-educated students, every year someone would ask me why I selected so many “old-fashioned” books for their reading. Why did my list include such works as “Treasure Island,” “Antigone,” and “Doctor Faustus”?

Always my reply was the same. By entering into these classics of literature, I would explain, students were also entering into the “great conversation,” a term used to describe thinkers through the ages discussing or referencing  the work of their predecessors and thereby refining Western values and ideas. Writers like Homer, Sophocles, and Jane Austen endure because they address truths about human beings that resonate with us today. By reading their books, we not only travel into the past but also bring the gifts of that past into the present. Subsequently, these writers enlarge our humanity.

Moreover, I would tell my students, if you don’t read these classics while in school, the odds in favor of your reading them as an adult sharply decline. Once out of the classroom, most of us read for pleasure and would be unlikely to pick up Dostoevsky’s “Crime and Punishment” or Kipling’s “The Man Who Would Be King.”

The Sound of Silence

Having looked at the lists from five or six schools, I now wonder whether the great conversation will someday fall silent for lack of education and interest.

If teachers at such institutions as Potomac, Roxbury Latin, and the Deerfield Academy are giving up the literary classics, if those students are no longer reading Charles Dickens, George Eliot, or even moderns like Flannery O’Connor or William Faulkner, what will become of our past and our culture? A true liberal arts education means some familiarity with literature and history, and yet so many of our secondary schools, and the great majority of our colleges, focus on the contemporary.

Surely these schools do teach literary classics during the academic year. It’s also possible that many of the instructors who compose these lists avoid the classics of literature because they underestimate the abilities of the young, believing that teens are unable to grasp the beauty of Shakespeare’s plays or the irony and wit in the poetry of John Donne. Instead of leading students through “Hamlet” or “Beowulf,” they find it easier to give students a simpler book set in the modern world. Such works, they doubtless believe, will appeal to the young and will improve the chances they will read them. Yet without realizing it, these teachers are making their students prisoners of their own time and place.

Readers of my articles here at The Epoch Times frequently find me arguing that only we as individuals or as members of small communities can bring changes to our culture, that we must stop looking to our schools and our government to revive virtue and instead set ourselves the task of providing our children with the education they deserve.

Well, once again I must sound that same trumpet call. It’s up to us to fight and to stand for culture and learning. In the case of literature, we should steal President Obama’s campaign slogan in 2012, which he in turn lifted from writer Alice Walker: “We are the ones we’ve been waiting for.” If our culture is to be passed to the next generation, we who revere and love our civilization must be the ones who pass its values along to our children.

A final note: Whether you’re paying tens of thousands of dollars for your 16-year-old to attend some prestigious academy or whether your child attends public school free of charge, take a few minutes to see what they’re reading, and then ask yourself: “Is this the education I want for my children? Are they being exposed to the great books of our culture?”