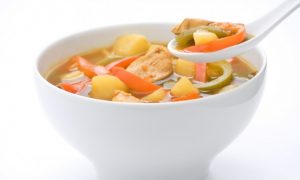 5 Reasons to Add Bone Broth to Your Diet
0 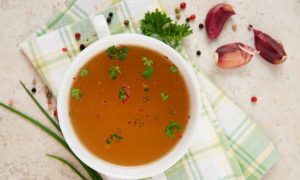 Bone Broth—A Most Nourishing Food for Virtually Any Ailment

Bone broth has a long history of medicinal use. It’s known to be warm, soothing, and nourishing for body, mind, and soul…

Physicians harkening as far back as Hippocrates have associated bone broth with gut healing. And while the importance of gut health is just now starting to fill our medical journals, this knowledge is far from new.

In fact, you could say modern medicine is just now rediscovering how the gut influences health and disease.

Many of our modern diseases appear to be rooted in an unbalanced mix of microorganisms in your digestive system, courtesy of a diet that is too high in sugars and too low in healthful fats and beneficial bacteria.

Digestive problems and joint problems, in particular, can be successfully addressed using bone broth. But as noted by Dr. Kaayla Daniel, vice president of the Weston A. Price Foundation and coauthor (with Sally Fallon Morell) of the book, Nourishing Broth, bone broth is a foundational component of a healing diet regardless of what ails you.

How Broth Has Been Used Through the Ages

While our ancestors used to have a pot of soup continuously puttering over the hearth, this changed with the advent of the industrial revolution, at which point many poor people simply couldn’t afford the fuel to keep the fire going.

Bouillons and broth powders got their start at that time, as the need for more portable soups arose. A major turning event was when Napoleon put out a call for portable soup to feed his army.

The winner of Napoleon’s competition was Nicolas Appert (1749-1841), whose canning process paved the way for the modern day canned goods. Later, John T. Dorrance came up with a process to create condensed soup, which led to the empire now known as Campbell’s Soups.

In the early 1900s, Campbell Soup was a decent product, boasting the best ingredients, including lots of butter, and recipes from the most famous chefs of the era. As noted by Dr. Daniel, it was a very different product from what we find in grocery stores today.

Today, if you want truly high-quality bone broth or soup, your best bet is to make it yourself. Fortunately, it’s easy. The trickiest part is usually going to be finding organic bones.

Bone broth, Dr. Daniel says, is actually a fast food. It just requires a little planning. One efficient way to create your broth is to use a slow-cooker or crockpot.

This will allow you to put a few basic ingredients into the pot in the morning, turn it on low heat, and by the time you get home in the evening it’s done.

Besides being convenient and efficient, it’s also safe, as you won’t have to worry about leaving a pot puttering on the stove, which could pose a fire hazard if left unattended. “It’s an old-fashioned remedy for the modern world,” Dr. Daniel says.

Bone Broth—One of Your Most Healing Diet Staples

5 Reasons to Add Bone Broth to Your Diet

Leaky gut is the root of many health problems, especially allergies, autoimmune disorders, and many neurological disorders. The collagen found in bone broth acts like a soothing balm to heal and seal your gut lining, and broth is a foundational component of the Gut and Psychology Syndrome (GAPS) diet, developed by Russian neurologist Dr. Natasha Campbell-McBride.

The GAPS diet is often used to treat children with autism and other disorders rooted in gut dysfunction, but just about anyone with suboptimal gut health can benefit from it.

Bone broth is also a staple remedy for acute illnesses such as cold and flu. While there aren’t many studies done on soup, one study did find that chicken soup opened up the airways better than hot water.

Processed, canned soups will not work as well as the homemade version made from slow-cooked bone broth. If combating a cold, make the soup hot and spicy with plenty of pepper.

The spices will trigger a sudden release of watery fluids in your mouth, throat, and lungs, which will help thin down the respiratory mucus so it’s easier to expel. Bone broth contains a variety of valuable nutrients in a form your body can easily absorb and use. This includes but is not limited to:

These nutrients account for many of the healing benefits of bone broth, which include the following:

Indeed, Dr. Daniel reports chicken soup — known as “Jewish penicillin”—has been revered for its medicinal qualities at least since Moses Maimonides in the 12th century. Recent studies on cartilage, which is found abundantly in homemade broth, show it supports the immune system in a variety of ways; it’s a potent normalizer, true biological response modifier, activator of macrophages, activator of Natural Killer (NK) cells, rouser of B lymphocytes and releaser of Colony Stimulating Factor.