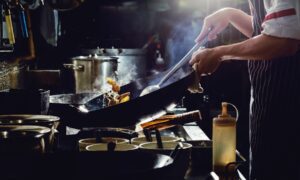 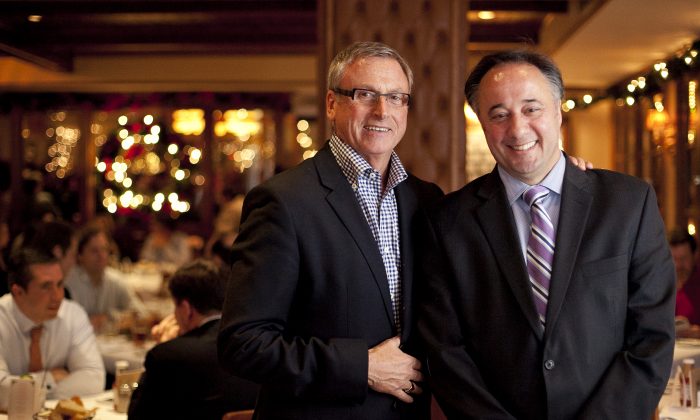 Joseph Smith takes his tennis seriously. It’s more than just a game, especially when he’s playing his customers-turned-friends in the Hamptons on weekends.

“I always make sure I beat them,” Smith said. “You let them win, they don’t respect you. You’ve got to beat them.”

On his doctor’s orders, Smith shouldn’t even be on the court. He blew out his knee while skiing and gave up the slopes. But the tennis stayed. “I still play. I’ll use it till it falls off.”

Through the same no-holds-barred approach to his restaurants, the co-owner of the Bobby Van’s steakhouses garners respect.

Ask anyone, staff or customer, and no one fails to mention Smith’s influence over how Bobby Van’s is run, and his popular presence—welcoming, charismatic, warm. Smith is originally from Belfast, true to the image of Irish hospitality.

When you’ve dined at Bobby Van’s a few times, you never need to glance at a menu again. Jason Silber, who comes to the steakhouse for business occasions about two or three times a week, hasn’t looked at it in three years. His drink is in his hand as soon as he walks in, and the only question as far as food is, “The usual?” On the wall, next to his usual table, a gold plaque bears his name, a sign of Bobby Van’s appreciation to frequent customers.

All this doesn’t fail to impress the business clients that accompany him.

Despite the elegant setting, there is a casual, down-home appeal. For Silber, it’s one of the rare steakhouses in town that hasn’t fallen to the spell of trends. “It’s a real man’s steakhouse. It’s not a scene here, with models and fancy steaks. Here you get your porterhouse, your mac and cheese, your nice bottle of wine, and enjoy the dark wood.”

Bobby Van’s is a carnivore’s dream come true: sizzling steaks whiz by on the waiters’ trays, their scent permeating the air and tantalizing hungry diners who have just arrived and are stealing glances at their neighbors’ plates.

The quality of the cuts is unmistakable, luxurious with a delecate marbling of fat throughout. The New York strip sirloin ($49), porterhouse (for two, three, or four, at $55 per person), and bone-in rib eye ($55) steaks are all aged for four weeks, intensifying and bringing about mouthwatering flavors.

The beef is procured from Master Purveyors, “the best butcher in town,” said Smith. “The most expensive also—but you pay peanuts, you get monkeys.”

For those inclined toward surf rather than turf, Bobby Van’s pays fishmongers a premium to get the freshest fish—the top of the barrel, so to speak.

At the prices he pays, Smith expects the best. “If you make a mistake and send me something wrong, I will cut you out, I will dump you. They know it because I’ve done it and it’ll take them a year to get back in.”

It’s all the more amazing that the prices on the menu haven’t been raised in the last five years or so, even though the price of beef has inched up about six times in the same time frame, said Smith. But the economy hasn’t been kind to expense accounts, and Smith is mindful of his clients.

On the service side, the number of staff also remains constant, “whether we’re doing 50 covers or 200 covers.”

That’s the heart of Bobby Van’s. At the 54th Street location, the waitstaff is a tight, cohesive group of 12, who have been together for 8 to 10 years and seem to communicate telepathically. “We’re a well-oiled machine. We don’t have to say much but we know what each other is thinking and that reflects in the service. It doesn’t lead to any sort of confusion,” said Josh Newberg, captain and part-time manager.

At the end of the day, for Silber, it’s the staff that keeps him coming back: “[They’re] extremely polite, whether you’re a first-customer or a 100th-time customer. They make you feel at home and that’s important when you’re trying to look good in front of clientele.” In turn the clients he brings invariably become converts. One can get used to this kind of treatment. And many do.

People have different names for Bobby Van’s: a community, a club, a refuge: “It’s our home meeting spot. ‘Come meet at Van’s for cocktails,'” said Silber.

Smith has hobnobbed with “three U.S. presidents, 4 million senators, 6 million congressmen,” and has been active in supporting the peace process in Ireland from this side of the pond for years.

Between himself and co-owner Rick Passarelli, the two make the rounds at the Manhattan locations, often greeting diners personally.

When he gets families who come in, he likes to ask the children trick questions. A correct answer gets them dessert. “You’re standing on top of the Empire State Building. You have a ton of feathers in one hand, and a ton of bricks in the other hand. You drop them at the same time, what hits the ground first—the feathers or the bricks?”

If they miss it, he’ll ask the parents this one: “Two Germans are walking down the street, one of them is the father of the other one’s son. What relationship are they?”

Geared to the Neighborhood

He also hired a designer to make sure the spaces are all women-friendly. “We don’t want to be a boys’ club, we want to cater to women also,” he said, noting “You also see more women entertaining and picking up the checks.”

There are 10 Bobby Van’s on the East Coast, with five locations in Manhattan, each distinctly different and geared to their respective neighborhoods and clients. The original, in Bridgehampton, Long Island, was opened in the summer of 1969, and has a laid-back, local vibe, very much in the spirit of the steakhouse’s original founder, pianist Bobby Van.

In Manhattan, the Broad Street location, downtown, is housed in the original bank lobby and vault of J.P. Morgan, with deposit boxes all around. The Times Square location caters to many tourists, with a wood-burning oven at the back.

Carnivores, the choice is easy: it’s steak or fish. (Vegetarians are better off going somewhere else entirely.)

The call of the turf predominates, with its promise of marbled fat, a caramelized crust on the outside, and a buttery, tender juicy inside. Diners are sure to get their fill of Neanderthal.

I’m partial to a char myself, so optimally, what you want is the dry-aged cuts for that well-developed crust, although every cut, down to the skirt steak, has its loyal fans.

The best reason not to dine alone is the porterhouse. Gather enough friends, or clients, or associates, and get a porterhouse for two, three, or four ($51 per person).

For an extra flavor kick, the Steak Gorgonzola ($49) marries the best of different worlds: roasted garlic, blue cheese, and sirloin.

The sides are all about comfort, and evocative of barbecue favorites: huge portions of mac and cheese, creamed spinach, and corn.

For those more fond of the sea, Bobby Van’s offers fresh fish and shellfish, from broiled sea scallops ($34) in a lemon caper sauce to grilled Atlantic salmon in a mustard beurre blanc ($36). I had the striped bass, which was a standout, with a light golden glaze of miso and tamari and exuding delicate savory sweet Asian flavors, in a white truffle sauce, and excellent paired with bok choi ($38).

After such a feast, you should be out of room for dessert. But if your sweet tooth won’t let you off the hook, you can try to score a free dessert from owner Joseph Smith by answering one of his riddles. Oh wait, that only works for children. Try the not-too-sweet raspberry cheesecake or warm bread pudding with vanilla ice cream. They taste just like home should, and that’s completely fitting for a place like Bobby Van’s.