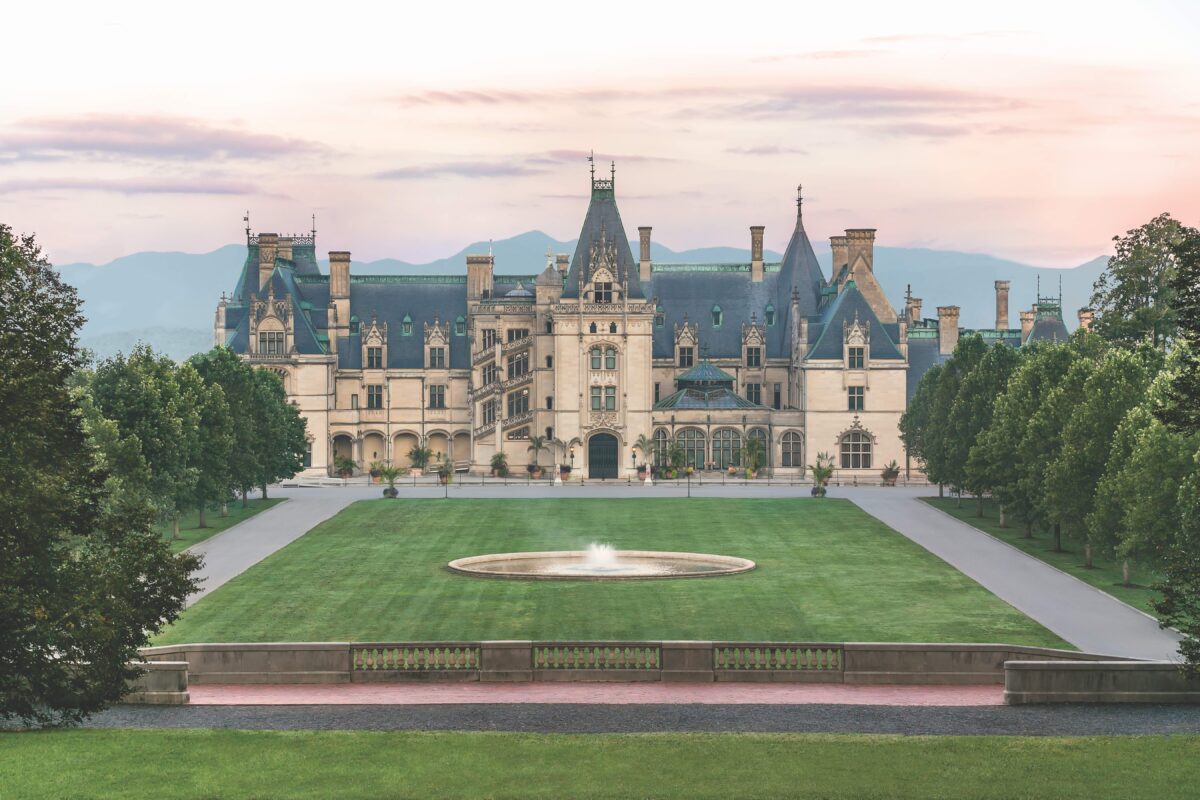 The Biltmore House façade with mountains in the background. （Courtesy of The Biltmore Company）
American Essence

George Washington Vanderbilt II, the youngest child of William Henry Vanderbilt, first visited the mountains of North Carolina at the age of 25. He fell in love with the highlands near Asheville and returned the following year, with his mother Maria Louisa Vanderbilt, to begin purchasing land for a country home. Maria Vanderbilt was seeking a place with a mild climate and healing mountain springs, and George was looking for a “place in the country.” When most people think of a country home, they think of a modest dwelling that requires minimal upkeep. When you are the son of the richest man in America, and the grandson of one of America’s most prominent entrepreneurs, you might have grander visions. Young Vanderbilt wanted to create an estate that would produce much of its own food—a model of sustainability. Looking at the distressed condition of much of the Appalachian forest, George wanted to create a planned approach to the stewardship of these lands. Enlisting the help of prominent landscape architect Frederick Law Olmsted and pioneer forester Gifford Pinchot, he laid out a model estate. He named it “Biltmore” after the Dutch town of “Bildt,” the family’s ancestral home in the Old World, and “more,” an Anglo-Saxon word for rolling countryside.

Biltmore’s 125,000 acres became a model of stewardship, guided by the hands of Olmsted and Pinchot. Many residents of the area found employment tending these beautiful gardens, and a village grew on the property. Vanderbilt hired noted architect Richard Morris Hunt to design the buildings of his estate. Hunt and Biltmore traveled to Europe, seeking inspiration and furnishings. The village and its centerpiece, All Souls Episcopal Church, stables, shops, and dairy were conceived by Hunt, the great Beaux-Arts architect. For the church building, Hunt chose a Romanesque Gothic style. The village and shops were modeled after a small English village. For George Vanderbilt’s residence, he looked to another influence—the Loire Valley of France, which was home to some marvelous 15th- and 16th-century châteaux. Blois, Chenonceau, and Chambord became Hunt’s models as he crafted a home for the bachelor millionaire. The stair tower of Blois would become a signature feature of the new house.

The house stands four stories high and is crafted from smooth Indiana limestone. The 250 rooms cover four acres of floor space. The Biltmore estate was the original “smart house”; it had electricity, Edison light bulbs, fire alarms, plumbing, refrigeration, and central heating. A passenger elevator and a service elevator were installed in 1895 by the Otis Corporation. They were the first elevators in Asheville, North Carolina, and are now among the oldest in the nation still in use. The Otis Corporation maintains the elevators to this day.

The house’s foundation was built from locally quarried stone, cut into a three-course ashlar (square block) chiseled by hand. The stone was hard to work with but made for a rough look to the foundation. For the main body of the house, Hunt chose the Indiana limestone. It was quarried by Hallowell Stone Company in Indiana and shipped in blocks to the site. Fabrication and erection of the stone was done by James Sinclair & Company of New York. Five thousand tons of limestone, enough to fill 287 rail cars, was required for the house’s construction. With the location being so remote, high in the mountains, transporting all of that rock could be quite a problem. When your name is Vanderbilt, however, it probably isn’t much trouble to imagine building a railroad, and that is exactly what George Vanderbilt did. The 3-mile rail line was later used to provide trolley service from the estate into Asheville. The stone masons and stone dressers received an impressive wage of $3.50 per day. An army of 1,000 workers, working six days a week, erected the mansion in six years, though work would continue on it long after. Covering it all was a massive and intricate roof. Visitors today may take a “roof tour,” where they can observe closely the many limestone gargoyles and grotesques (animal or human carvings). There are massive chimneys, with great carved detail, and slate roofs so steep that workers had to wire the slates to the building frame from inside the roof structure.

On Christmas Eve 1895, George Vanderbilt officially opened the house, welcoming family and guests. Christmas at the Biltmore Estate remains a time-honored celebration. Every year, the house is lavishly decorated for the season. With 35 bedrooms, 43 bathrooms, and 65 fireplaces, hospitality at the house was practiced as a high art. The maintenance and operation of the house required a small army of dedicated servants. The maidservants had their quarters on the fourth floor, and they were all compensated with “New York wages” instead of the local rate.

Three years after the house was completed, George married Edith Stuyvesant Dresser, a descendant of Peter Stuyvesant, Governor of Dutch New Amsterdam. Their only child, Cornelia, was born at Biltmore. The family of three enjoyed entertaining their many visitors. Guests at Biltmore could enjoy a variety of activities. There was an indoor swimming pool (without a filtration system, so it was only filled when guests came, then drained until the next party), a bowling alley, a billiard room, a Winter Garden conservatory, and George Vanderbilt’s magnificent library.

From his youth, George Vanderbilt was a bibliophile on the level of Thomas Jefferson. At the age of 12, he was keeping a list of what he had read, writing in small notebooks. A New York journalist said of him:

He was a bookworm, a student. … And his love of books came all from his own inner consciousness, for he was not graduated from any college [he actually graduated from Columbia University with high honors], and his education, while not neglected, had not been carried beyond the ordinary limits of high schools, though now, I doubt not, he is one of the best read men in the country.

George could read eight languages. On average, he would read about 81 books in a year. He owned 23,000 books, and the library held fewer than half of them. The 10,000-volume library is a magnificent space, 53 by 72 feet in dimension, rising 27 feet to the ceiling. Books on such subjects as history, art, architecture, landscape design, forestry, nature, interior design, travel, literature, religion, philosophy, and foreign languages give you a measure of the man’s interests. The library’s ceiling mural, “The Chariots of Aurora” by Giovanni Pellegrini, was brought to Asheville from the ballroom of the Palazzo Pisani in Venice, Italy. Karl Bitter, Austrian-born sculptor, carved the wood mantel as well as the andiron sculptures for the fireplace. A spiral staircase rises to a balcony level; there are balconies on both sides of the room, connected by a hidden passageway behind the chimney.

The Biltmore house has been coined “America’s Downton Abbey” and has become an opulent monument to the Gilded Age lifestyle. Most of the house is furnished in the likeness of a grand English estate. The Winter Garden, a large octagonal conservatory, was constructed in the Victorian manner in the center of the house’s first floor. The conservatory displays a fountain and sculpture, “Boy Stealing Geese,” by Karl Bitter. Cornelia Vanderbilt and John Cecil had their wedding breakfast by the fountain in 1924.

George, Edith, and Cornelia Vanderbilt can hardly be classified as the “Idle Rich.” Young George had run the family farm in New Dorp on Staten Island. As a young man, he developed an insatiable thirst for knowledge—studying art, architecture, music, agriculture, horticulture, and literature. As he became increasingly knowledgeable on a plethora of subjects, George had a high interest in promoting literacy. As a young man, he donated the land for Columbia University’s Teachers College, and he endowed the university’s medical school. One of New York’s first public lending libraries was his creation, later becoming part of the New York Public Library. George’s vision for improving the world, inspired by a life of learning, is well articulated in the shops and village of Biltmore. He and Edith founded enterprises there to teach and employ the local population, always driven by his vision for a self-sustaining community. Edith founded the “Biltmore Dairy Moonlight School” in 1914 to teach illiterate workers at the estate how to read. She also founded the Biltmore School of Domestic Science to train professional housekeepers. Workers on the estate were well respected, generously compensated, and treated to a special Christmas party at the Biltmore House for their children. Today, the estate is still owned by the family, stewarded by George and Edith’s grandson and their children, still operating in the gracious model first established by their grandparents. Though no one actually lives in the 250-room mansion, the Biltmore Estate welcomes thousands of visitors every year.

Bob Kirchman is an architectural illustrator who lives in Augusta County, Virginia, with his wife Pam. He teaches studio art to students in the Augusta Christian Educators Homeschool Co-op.