A glance at the ‘Botticelli: Artist and Designer’ exhibition in Paris
BY Lorraine Ferrier
TIMEDecember 17, 2021

The graceful figure of Venus poised in her shell, as depicted by Renaissance master Sandro Botticelli, is so synonymous with beauty that even those unfamiliar with art can recognize her, such is her fame. What is less well-known are his paintings of the Madonna that share similar qualities of classical beauty.

Throughout the Renaissance, artists referenced the ancient classics. Art historian E.H. Gombrich writes in his book “The Story of Art” that people were “so convinced of the superior wisdom of the ancients that they believed these classical legends must contain some profound and mysterious truth.”

In “The Birth of Venus,” Alessandro Filipepi, commonly known as Botticelli (circa 1445–1510), based Venus on the ancient statue Aphrodite of Knidos (Venus to Italians) by the Greek sculptor Praxiteles.

In Botticelli’s time, such earthly beauty was equated with the divine. “Over the course of the 15th century, beauty rapidly became an important feature of devotional paintings and almost a requisite in iconography; this reached its full development in Botticelli,” curator Ana Debenedetti writes in her book “Botticelli: Artist and Designer.”

The exhibition “Botticelli: Artist and Designer” at the Jacquemart-André Museum in Paris explores Botticelli’s artistic genius through around 40 of his artworks. These works—including portraits, altarpieces, private devotional paintings, and even decorative arts such as tapestries—are displayed in the exhibition alongside his contemporaries’ works, demonstrating links between his works and contemporary culture, and the fluid exchange of artistic ideas and styles between the mainly Florentine artists.

Right from the outset of his career, Botticelli used earthly beauty as a conduit to the divine. In his Virgin and Child paintings, for instance, one can clearly see the Virgin as being both of the earth and heaven. As Debenedetti writes: “[T]he idea that divine love is first stirred in human hearts by terrestrial beauty … was a major poetic theme in the Renaissance.”

Learning From the Master

Both artists endearingly depicted the mother-child bond that instantly connects us to the paintings’ subjects. Lippi depicted the Christ child trying to grab his mother’s attention, while Botticelli’s Christ child indicates that he wants to be nursed by grabbing for a piece of his mother’s clothing. In both paintings, the idealized Virgin and the halos over the figures affirm that these are more than mere family scenes: These are specifically created to lead the viewer closer to God.

The artists’ Virgin figures almost mirror one another, except that Lippi’s Virgin is on the left side of the composition, while in Botticelli’s painting she is on the right. In the 1400s, inclining, reversing, and swapping over a model-type was common practice in Italian workshops to avoid obvious repetitions, Debenedetti wrote. Artists copied the motifs, figures, and even compositions of other artists, especially in sacred paintings where the same stories were depicted and the opportunity to vary the composition was limited.

One fascinating aspect of Botticelli’s work is how his style of painting in his devotional works changed over time. On display is his “Madonna With Child,” also known as the “Madonna of the Book,”which he painted around 1482. The painting still shows the mother-child bond, but compared to his earlier works, the scene is saturated with color. Gone is the heavy architectural background seen in his “Campana Madonna” to be replaced by a simple window and a small hill. Botticelli added religious symbols to the scene—an open prayer book, the crown of thorns—to encourage the viewer to engage in contemplation and prayer.

The artist elevated the Madonna to her heavenly realm in the glorious altarpiece commission “Coronation of the Virgin With Saint Justus of Volterra, Blessed Jacopo Guidi da Certaldo, Saint Romuald, Saint Clement, and a Camaldolese Monk.” Bottticelli painted the top half of the painting, while artist Domenico Ghirlandaio painted the lower part. The celebratory scene depicts the Virgin entering heaven to a symphony of angelic music heralding her coronation. Five devout, earthly figures witness the scene. In the lower-right corner, the Camaldolese monk offering up his prayer is believed to be a portrait of the donor who commissioned the altarpiece.

The artist and his workshop specialized in painting “tondi,” circular paintings or reliefs made for private devotion, which were popular in Florence at the time. Debenedetti writes that the “circular form [was] most appropriate to represent the foundation of the Christian faith as, since antiquity, it represented the perfect geometrical form.”

Perfect as the form may be mathematically, the circle is a complex compositional shape to master, yet Botticelli excelled at it. Like many of his works, some tondi were copied by his assistants to create a series.

In the exhibition, there are several examples of these series of paintings. A tondi of particular note is “The Madonna of the Magnificat” by Botticelli’s assistant, known as the Master of Gothic Buildings, believed to be Jacopo Foschi. In the painting, two angels crown the Virgin as she sits on her heavenly throne writing. Christ sits on her lap as he looks up to heaven, with one hand on his mother’s, almost guiding her to write, and the other hand touching a pomegranate, symbolic of the Passion.

Throughout his career, Botticelli and his workshop created many devotional paintings for important institutions and patrons. He painted frescoes in Prato Cathedral as part of his apprenticeship, completed myriad commissions from the ruling Medici family, and created three scenes in the pope’s private chapel, later known as the Sistine Chapel. The impact of Botticelli’s sacred works was far-reaching, as many of his paintings were replicated in series for private devotional use.

Thus, although Botticelli’s paintings of Venus capture the attention of many art lovers, his devotional works featuring the classical beauty of the Madonna and Child bring us closer to transcendent truths.

The exhibition “Botticelli: Artist and Designer” at the Jacquemart-André Museum in Paris is curated by Victoria & Albert Museum curator Ana Debenedetti and chief heritage curator Pierre Curie and runs until Jan. 9, 2022. To find out more, visit Musee-Jacquemart-Andre.com 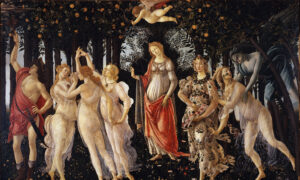 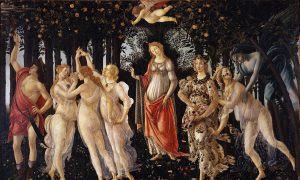 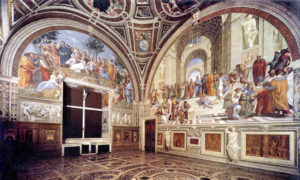