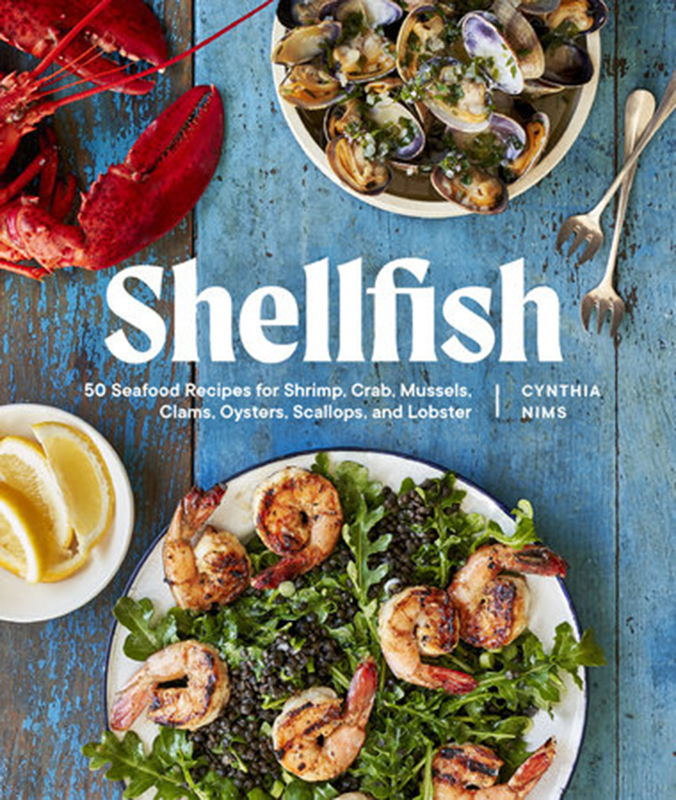 Bethany Jean Clement: How Do Cookbook Authors Do It? Cynthia Nims on ‘Shellfish’ and Her 50 (!?) New Recipes.

By Bethany Jean Clement
From The Seattle Times

How do you write a cookbook? Cynthia Nims has nine to her credit, each very full of her very own recipes (and she has co-authored many more). Her latest — “Shellfish,” just out from Seattle’s Sasquatch Books — offers 50 new preparations she’s devised that encompass seven kinds of mollusks and crustaceans. A graduate of École de Cuisine La Varenne, she’s also former editor of Simply Seafood magazine, former food editor of Seattle magazine and a longtime freelance food writer. But, still: Where do all the recipes come from?

The process of cookbook writing is, of course, different for different cookbook writers — Nims recommends the podcast “Everything Cookbooks” for a broader behind-the-scenes look. Since you’re probably curious, a few of Nims’ favorite cookbooks are “Cool Beans” by Joe Yonan, “Foods of Morocco” by Paula Wolfert, “James Beard’s American Cookery,” the newest “Joy of Cooking” and “All About Braising” by Molly Stevens, who’s also part of the “Everything Cookbooks” podcast. (Nims provided more titles but had to be stopped somewhere!)

Following, find Nims’ own words on her approach to cooking and to writing cookbooks (they’re distinct), plus what she calls a “lovely, spring-y” crab-and-asparagus recipe from “Shellfish.”

Cynthia Nims on Her Everyday Approach to Cooking — When She’s Not Working on a Cookbook:

Ninety-eight percent of the time — rough guess — when I’m cooking and it’s not recipe testing, I do so without a recipe. Sometimes it’s something I cook frequently, and it’ll have slight variations. Other times, it’s something I haven’t cooked before and I just wing it, based on elements of things I’ve cooked in the past or new ideas I’ve come across and want to play around with. And I refer to many cookbooks in my collection if I feel in a rut or have a hankering for something with which I’m less familiar.

On How One Sample Dish Came Together From a Random Assortment of Ingredients Plus the Workings of Her Mind:

My monthly box showed up from Hama Hama [Oyster Company] on Thursday, [and] it included a bag of mussels. I had cauliflower in the fridge, great local bacon in the freezer. I roast cauliflower frequently and have a roasted mussel recipe in the new book — why not combine the two? I put chopped bacon in a big oblong pan to roast until lightly crispy. I scooped out the bacon and discarded most of the fat, then added chopped cauliflower and garlic to the pan, and roasted until lightly browned and mostly tender. Then I added the mussels and roasted until they opened. It was aromatic and delicious — something I’d do again.

Coming up with new-to-me combinations of ingredients using various techniques is something I do pretty often. It’s one of the things I love most about cooking — I’m thankful to have the degree of comfort and skill in the kitchen to walk in and just start. It’s why I’ll never be a great baker, because I can’t keep myself from messing around with formulas and wanting to try a little something different.

On What Happens When It Comes to the Work on a Given Cookbook:

Off-the-cuff meals may inspire what later becomes a draft recipe I work on, but when developing recipes, I write a draft recipe in full form with all ingredients and quantities, detailed instructions, cooking times, etc. I may be guessing on some or many of those elements, but that’s what recipe testing is for — to verify, adjust as needed and update.
There is definitely research as well — I’m always learning and growing through this process — that is a large part of the joy of recipe work. I might look at six or eight versions of salsa verde and related discussions of the sauce, as a random example, from resources I trust.

The cookbooks that I’ve written have really grown out of just a subject that I am honestly drawn to, and — oh gosh, you know, want to have a reason to delve into more. I love the excuse to look at old archives at the library, and call people and ask questions, and look up old magazine articles and such. I really enjoy that I’m finding the background and context that leads up to this thing that we have come to love so much.

On Her Thinking Behind One Sample Recipe in ‘Shellfish’:

The lobster and artichoke stew is riffing on a traditional oyster stew, which is often little more than oysters, milk and/or cream, and butter. I opted to match a favorite ingredient of mine, artichokes, with lobster in this simple, lightly creamy soup. With just a handful of ingredients and relatively quick preparation, I’m hoping to convey the breadth of options with shellfish for quick, flavorful, interesting recipes. Plus it’s a great showcase for homemade shellfish stock, which I’m a big proponent of making to have stored in the freezer for occasions such as this.

On the Process of Recipe Testing:

Well, every recipe’s got to be tested at least a couple of times, sometimes three, sometimes four or five — it depends on the degree of tweaking, of editing that needs to happen. That is the meaty part of the cookbook process: making sure that you run through the recipes to the point of feeling confident that they’re going to be reliable for the reader. Oh gosh — you know, it just takes months and months of time, and a lot of attention to detail. Yeah, it’s the core of the project.

On Having Friends Test Her Recipes as Well:

It’s beneficial to get someone else’s eyes — and kitchen, and ingredients — to run through a recipe to confirm that it can be followed, and get feedback on an ingredient that maybe they had a hard time finding, or [they] weren’t sure what this meant — this description or whatever it might be. I may not do it with every single recipe, but [it’s useful] with recipes that are a little more detailed.

On What Kinds of Things Go Wrong in the Recipe-Testing Process:

Oh gosh, any number of things can go wrong [laughs] — or just maybe not as intended in my head. Take something like a sauce ends up more liquidy than I intended, so that technique has got to be worked out. Or, certainly, cooking times get tweaked. Or the volume of how many ramekins’ worth of something you’re going to have, so that it actually serves the six people you think it’s going to serve. The logistics of “a 9-by-13 pan’s really not big enough,” so either reducing the quantity or finding a different pan. Certainly, flavor profiles — the balance of ingredients can be off a little bit. So that all comes out in the testing. And sometimes recipes are not too far off, and other times it can be four or five tests and major adjustments along the way.

On Whether She Eats the Mistakes:

On What She Loves About Writing Cookbooks:

I really love that creative process — to sit down and sort of dissect: How do I get from point A to B and end up with a recipe? And just the freedom to create things, come up with some new ideas and play around. And not everything is going to work out — there’s definitely recipes that did not make it into the book.

I really go through it all — all the testing, all the rewriting, all the editing — in the hope that someone is going to read this cookbook in their kitchen, get those ingredients and have a great experience — and just find pleasure in it.

This interview was edited for length and clarity.

Makes 4 to 6 servings
For such a simple presentation as this, with a couple of star ingredients, it’s an ideal time to splurge on lump crabmeat, if that’s an option. The aioli flavor will be more developed if made an hour or two before serving, but is at its best served the same day it’s made; see the note (at bottom) for a shortcut alternative. — Cynthia Nims

Directions
1. For the aioli, whisk together the egg yolk, lemon juice and mustard in a medium bowl. Begin adding the oil a few drops at a time, whisking constantly until the yolk begins to turn pale and thicken slightly, showing that an emulsion has begun to form. Continue adding the rest of the oil in a thin, steady stream, whisking constantly. Whisk in the green onion, garlic and salt. Refrigerate the aioli, covered, until ready to serve.

2. Half-fill a saute pan or large deep skillet with generously salted water, and bring the water to a boil over high heat. While the water is heating, prepare a large bowl of ice water. Add the asparagus to the boiling water, reduce the heat to medium, and simmer until evenly bright green and the tip of a paring knife meets little resistance through the end of one of the larger spears, 2 to 3 minutes. Use tongs to transfer the asparagus to the ice water, and let sit until fully chilled. Transfer the chilled asparagus to a clean kitchen towel to drain.

3. Trim each asparagus spear to a length of 5 to 6 inches, saving the bottom trim. Return the spears to the kitchen towel, roll them up in the towel and refrigerate until ready to serve. Thinly slice the trimmed ends, and put them in a medium bowl. Thinly slice the reserved dark-green onion tops, and set aside to use for garnish.

4. Pick over the crabmeat to remove any bits of shell or cartilage, and squeeze the meat gently to remove excess liquid. Add the crab to the bowl with the sliced asparagus, and add 1/4 cup of the aioli. Toss to evenly mix, without breaking up the crab pieces too much. There should be just enough aioli to hold the crab and asparagus together; add a bit more if needed. Taste for seasoning, adding more salt if needed. Cover the bowl, and refrigerate for about 30 minutes to chill and allow flavors to meld.

5. To serve, arrange the chilled asparagus spears alongside each other on individual plates. Spoon a mound of the crab mixture into the center of each raft of asparagus, scattering some of the green onion tops over all. Serve right away, passing extra aioli separately.

NOTE: To make a quick aioli, stir the green onion, garlic and salt into 1/2 cup prepared mayonnaise. The flavor will be best if made a few hours ahead, covered and refrigerated. It won’t be quite as richly flavored as homemade, but it’s a decent alternative.