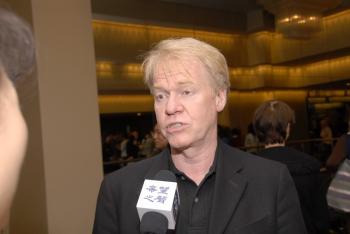 Attending the show with his wife, Agnes, it was Mr. Bristow’s third time seeing the Divine Performing Arts performance and he rates this one the best so far.

Mr. Bristow’s daughter has just graduated from the National Ballet School, and he commented on the dance techniques.

“It’s very fascinating because of the way the stories are integrated into it and the way the costumes are used differently than traditional European ballet,” he said.

He also enjoyed the erhu number.

“The woman who plays the erhu—that was the prettiest I ever heard that instrument sound. Very emotional. You’ve got all the emotions out of what she’s playing.”

Leading a team that has released three feature films and a company that distributes family friendly film, he felt the way the projection screen provided the background was also superior.

“It’s a very fascinating way [in which] the backdrops are being used now both to bring characters to the ground and to have them on stage and then return.

“Especially in Lady of the Moon, that was a particularly good use of that screen. And the same thing with the water dance. What it does, it helps set a tone for the piece that’s being done.”

He has plans to make a film about Divine Performing Arts choreographer, Tia Zhang. “I know that Tia is an incredible choreographer and very demanding of the dancers.”

Mrs. Bristow was also full of praise for the Spectacular.

“I think the message is all about caring for other people, nurturing the human spirit and just love and support,” she said.

A writer of educational materials for schools and universities, and for parenting and life skills, she is currently working on a book about Tia Zhang’s life.

“I thought it was one of the most phenomenal shows I have ever seen. I will come back every time.”

The performance that stood out most for her was Risen Lotus Flower — a depiction of the persecution of the spiritual practice Falun Gong in today’s China.

“I think that summed up the whole show and then bringing people together for a common purpose and fighting something that isn’t right in society and that was the message that I got from it.”

Mrs. Bristow added that she thought the “choreography was extremely creative, there was just so much detail in everything and I never felt bored for a moment. The colours, the music — it was just phenomenal experience. Every face told a story….”

Like her husband, she had seen the Spectacular before and agreed that this was the most impressive show so far.

“I think about all the live performances that I’ve seen, I can’t think of anything at the moment that touched me as much as this one. I think I just used the word phenomenal too many times to describe it!”

The Mid-Autumn Festival is one of China’s most ancient and cherished holidays. The Spectacular expresses Chinese classical dance and showcases authentic traditional Chinese culture. Through background scenery, costumes, and choreography, the Spectacular expresses truthfulness, compassion, and pure beauty. China’s history comes to life in this gorgeous performance that is entertaining, inspiring, and uplifting. The content of all programs is presented in both Chinese and English. For more info, visit DivineShows.com/Toronto.