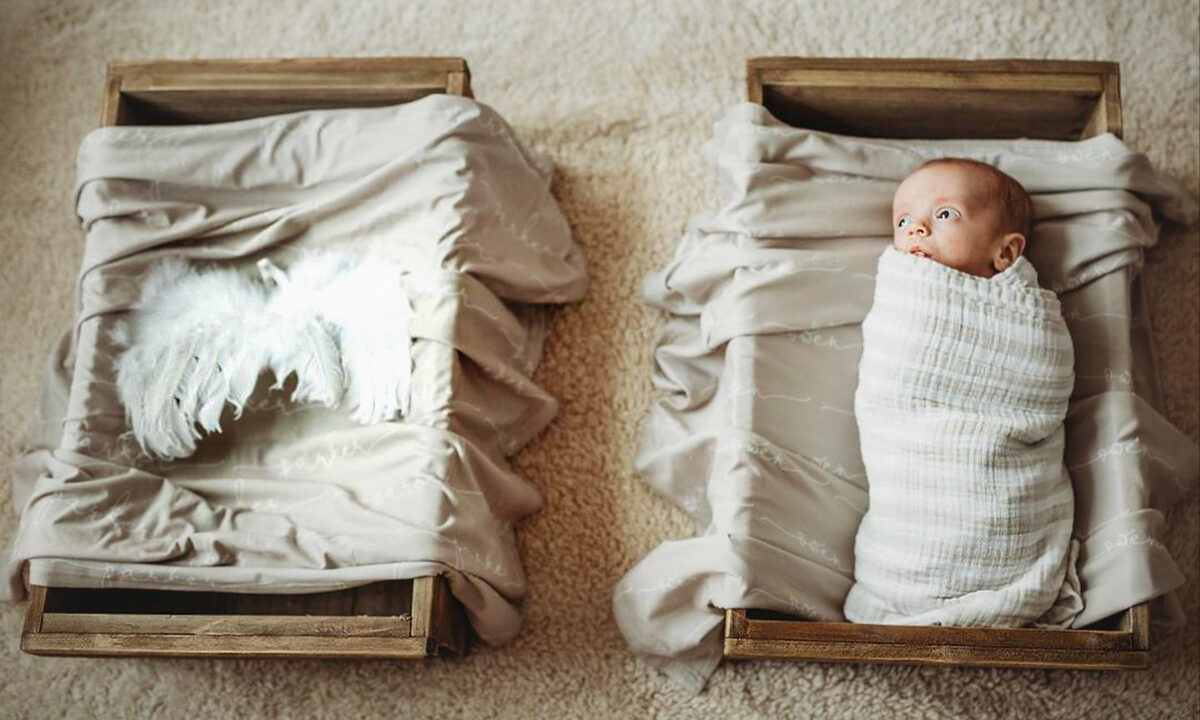 Planning for a photoshoot, mom Sara Clark, 26, bought a pair of miniature, identical wooden cribs made of rustic wood for her twin boys. In one would lie her lively son Owen, wrapped in a cozy blanket; the other crib would remain empty. Online, she ordered a pair of tiny angel wings—to fill the place of Parker, Owen’s twin brother in heaven.

After a precarious pregnancy and premature birth, the mom from Morrisville, North Carolina, knew that Owen’s coming home from the hospital was an occasion worth celebrating. From a Facebook parent support group, she got an idea for a photoshoot worth cherishing forever but wanted to somehow include Parker, the sibling who didn’t survive.

“It was very emotional for both our family and our photographer. She did an amazing job,” Sara told The Epoch Times. “Our photoshoot was about a week or two after Owen came home.”

Owen, who is now thriving, traversed a perilous road to recovery.

Last May, Sara and her husband, Bronson, 28, learned they were having twin boys. Sitting together in a hospital room, they joked about how crazy it would be to have twins when the doctor returned to complete the ultrasound.

“We were absolutely floored. We couldn’t believe it but we were ecstatic,” she said. “We both laughed so hard in disbelief when we saw two little babies on the screen.”

These two precious bundles were to complete the young family. Sara, a medical sales rep, and Bronson, a chaplain assistant in the Army Reserve, also have two healthy, strapping toddlers, Brooks and McKenzie.

However, at around five months into her pregnancy, amniotic fluid in the sac surrounding one of the babies, Parker, began increasing at an unhealthy rate. Sara’s doctor became concerned.

Sara’s pregnancy journey with Parker and Owen started out similar to her previous pregnancies, she said. She had morning sickness, but other than that, she felt great. Then, at around 25 weeks, things started to change.

“I was getting bigger by, what felt like, the minute,” she said. “My doctor asked me to stop traveling for work, and working out. I was constantly contracting at this point, throughout the day.”

At 27 weeks, she went into preterm labor, which doctors succeeded in halting, giving the babies steroids to help in the event they did come early. But over the next few weeks, concern grew that the boys were experiencing twin-to-twin transfusion syndrome, or TTTS.

A rare condition that occurs when blood moves from one twin to another while in the womb, TTTS causes multiple complications. After three weeks of constant close monitoring, Sara’s waters broke. She was just 30 weeks.

Efforts made to stop labor were to no avail, and medics elected to do an emergency C-section.

It was while doctors struggled to administer an epidural that Sara’s instincts strongly kicked in.

“All of a sudden, I had an uneasy feeling that something was wrong,” she said.

The procedure began, and twin A, Parker, came out first.

“No one showed him to me or said anything,” the mom added. “Then Owen came out and they showed him to us over the curtain. I immediately began to worry.”

An NICU doctor told the desperate couple that they were performing CPR, but Parker was not responding.

“It didn’t look like he was going to make it,” she said. “He told my husband that he should come see him if he wanted to see him in his last few moments alive.

“My husband was hesitant to leave me, but I insisted our son should not die in a room full of strangers. I was devastated. I was crying and praying out loud to God to please save my son.”

A few moments later, the same doctor came back and told Sara that Parker was alive.

“His vitals jumped the moment my husband walked in the room,” Sara said. “The doctor and nurses all talked about this being a miracle. I was so relieved.”

Baby Owen also had health complications, but was placed on a ventilator and was stable. It was only later in the day that one of the doctors returned to Sara and Bronson to tell them Parker wasn’t going to make it, and he was not sure how much time he had left.

“We immediately ran to Parker’s bedside,” she said. “It was earth shattering. It felt like someone tore my heart out of my chest.

“When they knew it was not going to be long, they allowed me to hold Parker for the very first time. His vitals were quickly going down.

“My husband and I sat there holding him for hours. I did not want to let go.”

After Parker’s passing, the couple wanted to hold a memorial service straightaway, but opted to wait on account of the pandemic.

When Owen finally came home after a three-month hospital stay, Sara arranged for a treasured family friend to take the poignant pictures.

“The photoshoot meant the world to me” Sara said. “I will cherish those photos forever.”

Sara describes Owen as “the sweetest little boy” who “loves being held and cuddled,” adding, “There were times that we were worried he wouldn’t make it, but he was so strong. He is our little fighter.”

The family is planning to hold a memorial service for Parker on the first anniversary of his passing.