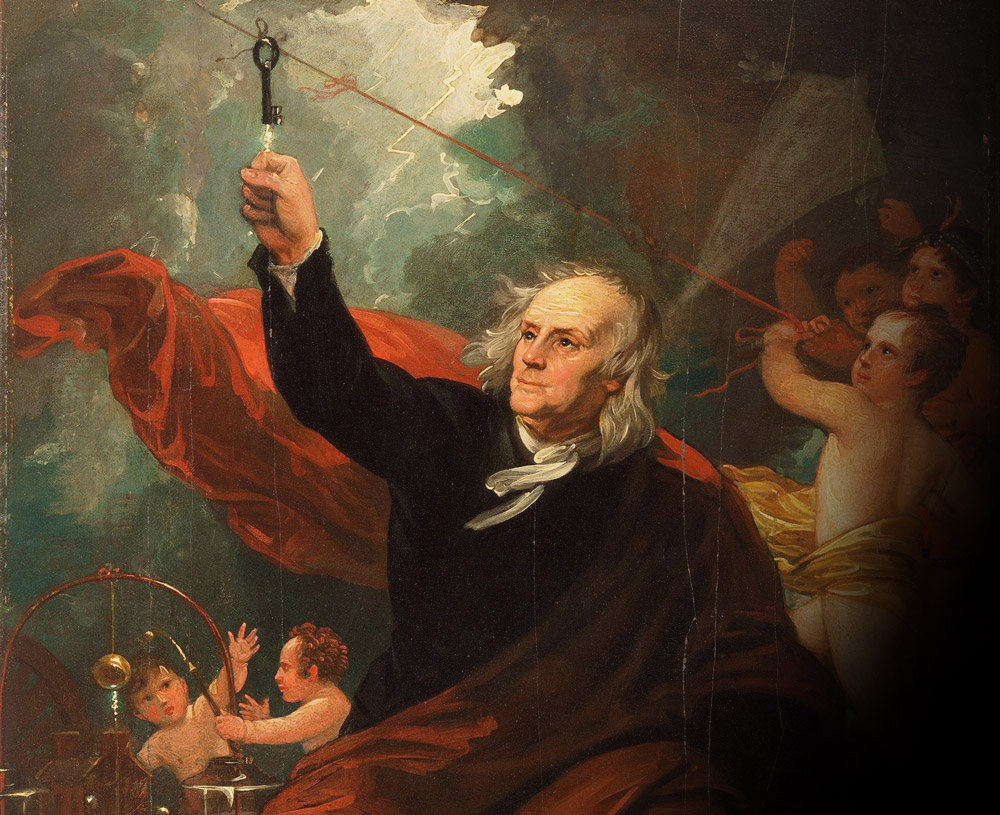 When Benjamin Franklin loaned money to a man in 1784, he made this request: “When you meet with another honest Man in similar Distress, you must pay me by lending this Sum to him.” In other words, Franklin did not want to be paid back; he wanted that man to help someone else in the same way.

Early American artist Benjamin West (1738–1820) had a strong friendship with Franklin. West was raised in a Pennsylvania Quaker community that practiced mutuality and trust; he got his start as an artist from these and other goodhearted people. And he never forgot.

Native Americans taught West how to make paint by mixing riverbank clay with bear grease. Influential people in the Pennsylvania colony soon saw what West could do with his natural talent. Gunsmith William Henry took him under his wing and encouraged him to make a painting of an engraving. This work caught the attention of William Smith, provost of the College of Philadelphia, who offered West an education and connections with important colonials.

Wealthy Pennsylvania merchants saw great promise in the young Quaker who could draw and paint. Two colonials paid for his trip to Italy for more training: William Allen, mayor of Philadelphia and later provincial chief justice, and William Smith. There, the young artist learned the painting techniques of Italian masters. He also studied the theories of art critic Johann Winckelmann on neoclassicism and his quest for ideal beauty through a study of classical art.

An American in London

West moved to London and settled there in 1763. It was a happening place when he arrived and by 1768 the Royal Academy of Arts was founded, with Joshua Reynolds as its first president. England was producing gifted artists doing impressive work: Thomas Gainsborough, John Constable, and of course, Reynolds.

West made his name in London by painting historical scenes in the neoclassical style. But he supported his family by painting portraits of wealthy aristocrats, who were drawn to his natural charm and talent. Soon he drew the attention of the king and did portraits of the royal family.

West became a favorite painter of King George III (yes, that King George), who eventually appointed him the second president of the Royal Academy of Arts after Reynolds.

As West made a name for himself in London, he remembered to pass on his good fortune. He counseled, taught, and befriended three generations of American artists who came to England to study. West provided everything from advice, instruction, and food to money and, in many cases, a job as his studio assistant. His home and studio held a trove of works by the old masters, as well as casts of classical sculptures. Young artists could study his art at a time when no such public collection existed.

The artists who came to West had neither the skills nor the connections to succeed in an artistic career. West used his technical knowledge and experience to train and advise the artists who came to him for help. He taught them “complex multifigure compositions and employed sophisticated glazing techniques,” according to West’s biography on the National Gallery of Art website. His tutoring and advice transformed the work of the young Americans who studied with him.

These students returned to the colonies to document America’s founding in portraits and history paintings. They included some of the greatest painters in American history: Charles Willson Peale, Gilbert Stuart, John Trumbull, Ralph Earl, Washington Allston, Thomas Sully, and Samuel F.B. Morse, among others.

Among the first wave of young artists to come across the Atlantic was Gilbert Stuart. West welcomed Stuart, who was destitute, into his home in 1775. Under a five-year apprenticeship with West, as well as his considerable influence, Stuart set up his own London studio.

Stuart’s portrait of George Washington shows a detailed shirt ruffle with a more painterly approach to the powdered hair. Stuart was known for a range of flesh tones—rosy pink for cheeks and lips, a slight five o’clock shadow around the mouth, and well-placed highlights at the nose and forehead. He showed an adept technique learned under his mentor’s tutelage.

In the 1780s, another wave of eager students approached West, including John Trumbull, a former mapmaker in the Continental Army. The War for Independence was in full swing, and Trumbull wanted to paint prominent people and battles of the war.

He studied the great neoclassical artists in France as well; there he visited an American scholar and patriot, Thomas Jefferson,  who advised Trumbull in his now-famous painting of the signing of the Declaration of Independence.

Now widely known on both sides of the Atlantic, West accepted a third wave of artists to support around 1809. Among them was a British-born, American-bred artist: Thomas Sully. Sully painted West’s portrait and brought West’s ideas and techniques back to the United States, “providing a foundation for the growth of the arts in America in the Federal period and creating a late eighteenth and early nineteenth century American style of considerable sophistication,” according to West’s biography on the National Gallery of Art website. When he returned to America, Sully applied what he had learned from West in another way: He did not charge students for painting lessons.

In 1783, West began a painting—never finished—of the participants negotiating peace between America and Great Britain after the war. The painting shows five Americans who were sent to negotiate peace terms with Great Britain: John Jay, John Adams, Benjamin Franklin, Henry Laurens, and William Temple Franklin (Benjamin Franklin’s grandson). West painted all the figures from life. The British negotiators would not model for the artist, and so although he had begun the painting in 1783, West never finished the work, which he wished to present to Congress. John Quincy Adams discussed this painting in his diary: “As I very strongly expressed my regret that this picture should be left unfinished.”

When Benjamin Franklin was in London, he and West met and became fast friends. To honor Franklin after his  death in 1790, West painted a dramatic, but not actual, scene of Franklin showing how lightning generates electricity—a totally new area of study. Supposedly, this dangerous experiment occurred in 1752. “Franklin was aware of the dangers and did not perform this experiment, as pictured in popular literature. Instead, he used the kite to collect some electric charge from a storm cloud, just enough to show that lightning was electrical,” according to the Joy Of Museums website. The painting, in oil on slate, was a study for a larger work that never happened.

West depicted Franklin discovering electricity as given by the divine. Franklin is shown with an aura around his head, seated on clouds. Putti (little cherubs) assist him in drawing electricity from a kite in the sky during a thunderstorm. Two celestial beings are working with scientific instruments on the left. The scene explodes with energy—Franklin’s hair blows, his red cape billows, the kite is whipped among dark clouds. Franklin’s face is a picture of calm confidence; he is unafraid of being electrocuted and calmly accepts the assistance of the heavenly beings.

West and Franklin maintained close ties throughout the rest of their lives, even after Franklin returned to America.

The Quaker community that originally nurtured West paid it forward to their country as well. Quakers are reputed to have introduced the Bill of Rights and Constitution to the new government.

What West, Franklin, and the Quakers practiced could be what today is known as a “gift economy.” Giving so the recipient passes on the good fortune has been found to benefit those who give and those who receive. Every community can benefit from the example of the Quaker artist who paid it forward threefold and more.