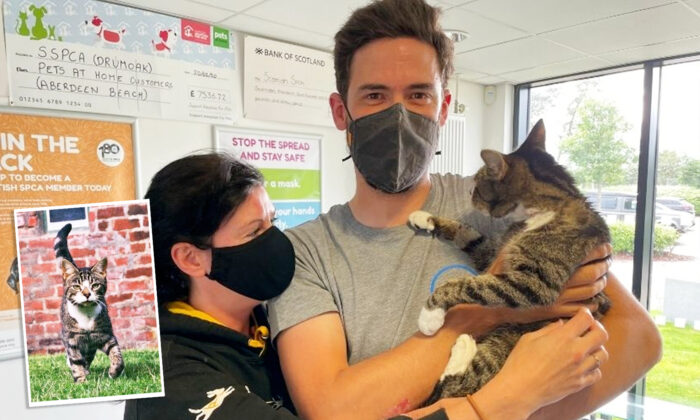 A 2-year-old cat that went missing in March 2011 has been reunited with his family after 10 years of being lost in Aberdeen, Scotland. The now-12-year-old feline, according to his overjoyed owners, will have a “very happy and relaxing retirement.”

The Scottish SPCA was called after Forbes the cat was spotted in Aberdeen’s Ferrier Gardens neighborhood looking “very thin with protruding bones,” the SPCA said in their news release.

Animal rescue officer Greg Stevenson attended to the friendly tomcat at the site and scanned him for a microchip. Finding one, he was able to call Forbes’s former owners, Neil and Lucy Henderson, while Forbes was in desperate need of visiting a veterinarian to be treated for fleas and mites.

Stevenson was amazed when he learned how long the frail cat had been missing from his original home in Rosemount.

“The owners couldn’t believe it, but were absolutely over the moon,” he recalled. “They had previously lived in the Aberdeen area and are now living in Edinburgh. They were just thrilled to hear that Forbes was coming back to them.”

“We’d had him from when he was a kitten and we had such a special bond,” said Neil. “He was such a unique and friendly character, we absolutely adored him.”

After Forbes went missing, the couple went door to door with posters made by a friend, pleading neighbors to check inside sheds and garages, but he was not found. After eight or nine months, Neil and Lucy sadly conceded that the worst may have happened.

Recently, as Neil was driving on the highway, his wife called with the amazing news that their beloved cat had appeared after 10 years.

“She told me I had to pull over,” Neil said. “I was completely unprepared for what I was about to be told, and hearing that Forbes had been found left me completely astounded. I have to admit that I was completely overcome with emotion, and turned the car round immediately to go home.”

The cat was found less than two miles from the Hendersons’ former home. The couple had stayed at the same address for three years after Forbes went missing, actively searching for months, but moved to Edinburgh in 2014.

While Forbes’s skinny frame and flea infestation indicated a hard life on the streets, Stevenson said there’s no real way of knowing where the cat had been, or what adventures he’d had, over the years.

The SPCA advocates for the mandatory microchipping of cats to help reunite them with their families, should they ever go missing. Due to the roaming nature of cats, said Stevenson, it’s important not to invite a healthy, owned cat that isn’t yours into your home, as it may displace them and be heartbreaking for the owners.

Since Forbes’s return, Neil said, the senior cat has adopted many of his old habits, including keeping Neil’s late-night video game habit in check by meowing loudly for bedtime snuggles.

Neil and Lucy are gradually introducing Forbes to their other two cats and two dogs, using scent-swapping. “He is staying inside while he gets used to everything,” Neil said. “He’s exploring a new room each day.

“This is just the best outcome for us. We never thought we would see him again. It’s like a closed chapter has just opened up. It’s a dream come true.”