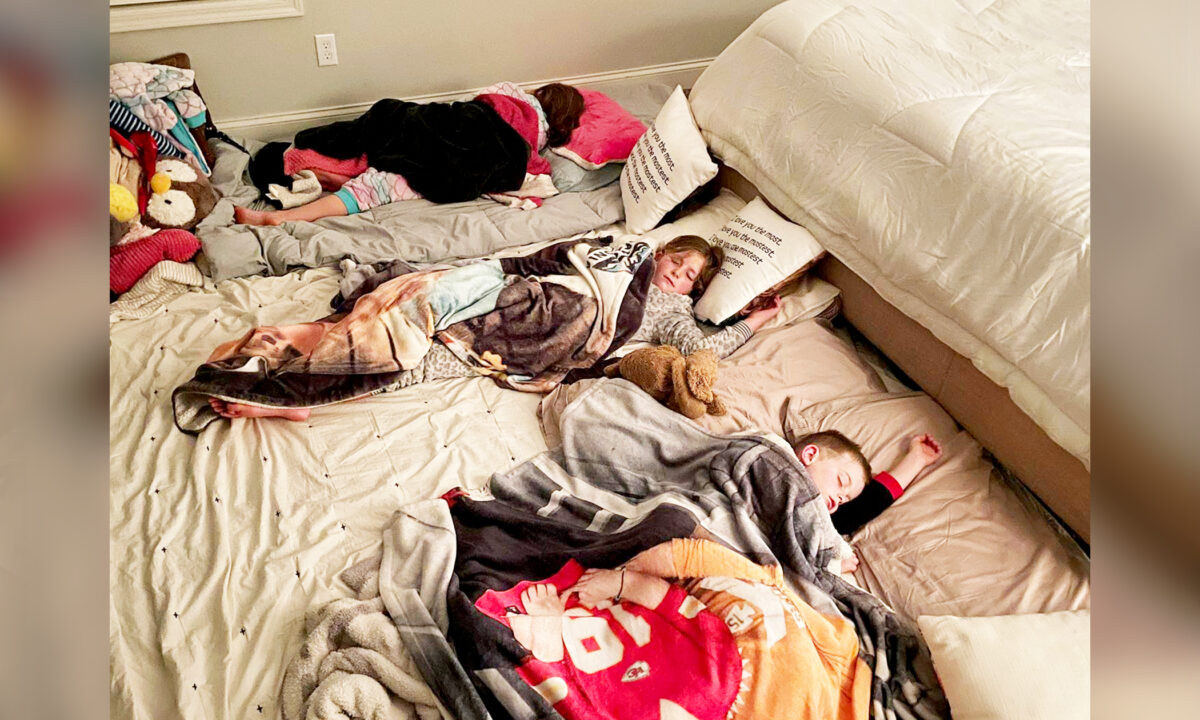 ‘Being by Me Made Them Feel Safe’: Widower Explains Why His Kids Still Sleep by His Bedside

After losing his wife to cancer, a widower let their three young children set up camp by his bedside so that the family of four could feel safe together. Now, over two years later, the children still sleep by his bedside, and their mother’s memory lives strong.

Brandon Janous, 41, of Knoxville, Tennessee, married his sweetheart, Rachel, in 2010, and together they welcomed daughters Hadley, now 10, and Cooper, now 9, and a son, Macklin, now 7.

On March 1, 2020, after a two-year battle with cancer, Rachel passed away.

Brandon told The Epoch Times that the family said goodbye more than once.

“She spent her last 39 nights in the hospital, and we thought we’d lost her many times, so there were a few goodbyes,” he explained. “As hard as they were, I’m so glad that I got to say goodbye; sometimes in life, we don’t get that chance.”

However, telling his children that their mom wouldn’t be coming home was the hardest conversation he’s ever had to have, Brandon said. The doting husband had refused to leave his wife’s side in the weeks leading up to her death, and a week before she passed, he told their kids that his homecoming would signify the day that “Mommy had gone to Heaven.”

“They had seen Mommy that morning because they visited her each day, they said their goodbyes, and that night when I came home, there wasn’t a long discussion,” Brandon recalled. “They just knew: Mommy had made it to Heaven, Mommy had beat cancer, Mommy was healed, and Daddy was home.”

Initially, Brandon tried letting Hadley, Cooper, and Macklin share his bed, but he lost sleep for a month. Knowing that they weren’t going to leave his side, in search of a better solution, Brandon set up a bunch of pallets on the floor in his room, despite having a four-bedroom house.

“Being by me made them feel safe, and I get that because I felt the same being by Rach in the hospital,” he reasoned. “I assumed eventually they would get tired of it, that eventually their beds would feel like a better place to sleep. But we are two years … into this and nothing has changed, and I’m okay with it.”

He believes that his kids will one day leave the floor, but states that he’s not going to be the one that makes them do that.

Brandon met Rachel through college friends and fell head over heels in love. He spent 10 years pursuing her before he convinced her to marry him. Rachel was diagnosed with cancer for the first time in April of 2018, and while shocked, the couple were convinced they could beat it. The first time around, they actually did.

“That’s the thing about cancer: it’s not a death sentence,” said Brandon. “In April of 2019, we received a clean bill of health and had put that season behind us. But it came back in August of 2019 and really took over her body. It had spread into her spine, and then her brain.”

One thing that Brandon and Rachel agreed to early on was to never whisper around the kids. Even when they got the cancer news, said Brandon, the family were “all in this together.” As Rachel’s cancer got worse, they didn’t tell the kids that she was going to get better, because Brandon wanted his kids to be able to lean on and trust him, especially his girls, who would enter their teens before long.

Rachel had chemotherapy and radiation, a double mastectomy and hysterectomy, and visited the best doctors they could access across the United States. But she lost her fight.

“I lost my wife, not because I didn’t love her enough, but because love wasn’t enough,” said Brandon, who broke the news in a moving post on Facebook the day his wife passed away.

The Texas-born dad of three, who’s the co-founder of a beauty brand, @beautytextofficial, still struggles to comprehend how his children cope without their mother.

“Imagine having to do Mother’s Day without your mom, Christmas, birthdays, school field trips, doctor’s appointments, dinner each evening,” Brandon said. “I don’t know what it’s like not to have a mommy, I can’t imagine; I’m 41 and still need mine on a daily basis.”

Life without his wife hasn’t been easy, and there are challenges that come along each day; however, Brandon said that his loving wife had prepped them so well for this time.

“She spent her last months on Earth making sure all those around her would be okay when she was gone,” he added.

She’d even gone so far as to schedule dental appointments, hair appointments for her girls, and remembered all the little things that Brandon may have forgotten in the wake of her passing. “Somehow, even to this day, she keeps showing up to make sure we are okay,” said Brandon.

The doting dad has become part of a tight-knit widow/widower community, and, despite his profound loss, is grateful he had the chance to sit by his wife in her final days. So many of his new friends, who lost their loved ones to sudden accidents, did not.

“I hated watching my wife die, but I’m so glad that I got to have a front-row seat in those final days,” he said. “I’m so glad I got to watch the way she lived, loved, and eventually died, because I don’t know a person in the world that did those things better.”

Now, reflecting back, Brandon counts becoming parents three times as among the moments that mattered most. He and Rachel also spent an entire year traveling the country in a motor home when their kids were under 5, an experience that taught Brandon the “true meaning of presence.”

Brandon laments that Rachel did so many things that he didn’t notice at the time, and he wishes he had shown her the appreciation she deserved. Be a “noticer,” he implores others, and be grateful for what you have while you have it.

He reflected: “We didn’t lead with, ‘We have cancer.’ Most people that we came into contact with didn’t know this, just like you don’t know what others are dealing with. So, be nice to people.

“No one ever regrets being kind, and sometimes you’ll be the only ‘kind’ in someone’s day. Be that person. Rachel was that person; be like Rach.”