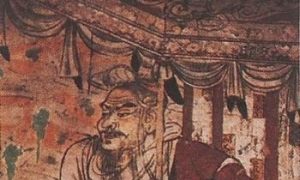 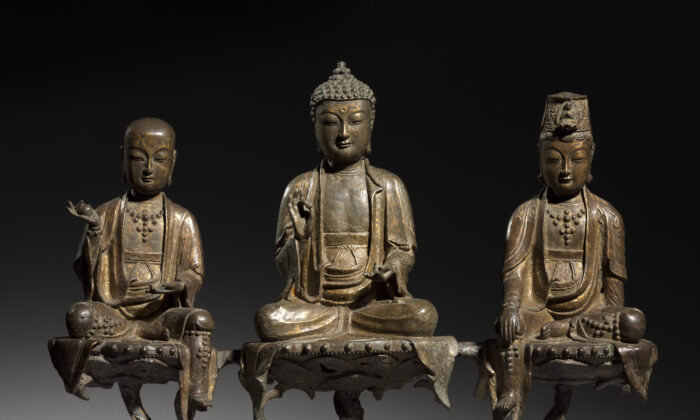 Behold the Beauty: A Glimpse of a Heavenly Paradise

Rare and sublime, The Cleveland Museum of Art’s 15th-century “Amitabha Triad” features three divine beings central to Buddhist belief. Only a hint of the gilt remains of this once-hallowed Buddhist treasure, yet the deities’ meditative serenity shines on.

Each deity is sitting on a lotus-flower throne in readiness to welcome Buddhist adherents to the Western Paradise (Buddha Amitabha’s heaven). In the center, Amitabha sits cross-legged in the lotus position and is flanked by two heavenly attendants: the Bodhisattvas Avalokitesvara and Ksitigarbha. Each of the divine beings makes a different heavenly gesture, called a mudra, with their hands.

Buddhists believe that bodhisattvas are on earth solely to save living beings from the pain and suffering that comes from being bound by the cycle of birth, life, and death—a cycle that Buddhists call samsara.

Buddhist relics were once kept inside each figure, but those relics are long lost.

In an article on the museum website, Ghichul Jung, director of the Sustainable Korean Culture Institute, explains how a few specific details helped identify when the triad was created. Normally a triad such as this would not include Ksitigarbha but another bodhisattva called Mahasthamaprapta. But in Korea in the 1300s and 1400s, Ksitigarbha frequently replaced the latter.

Examining the object further, Jung deduced the draping and a mark on the third eye (in the middle of the forehead) was stylistically similar to a Ming Dynasty Chinese Buddhist statue at the Metropolitan Museum of Art that was created in 1411.

To find out more about the “Amitabha Triad” at The Cleveland Museum of Art, visit ClevelandArt.org