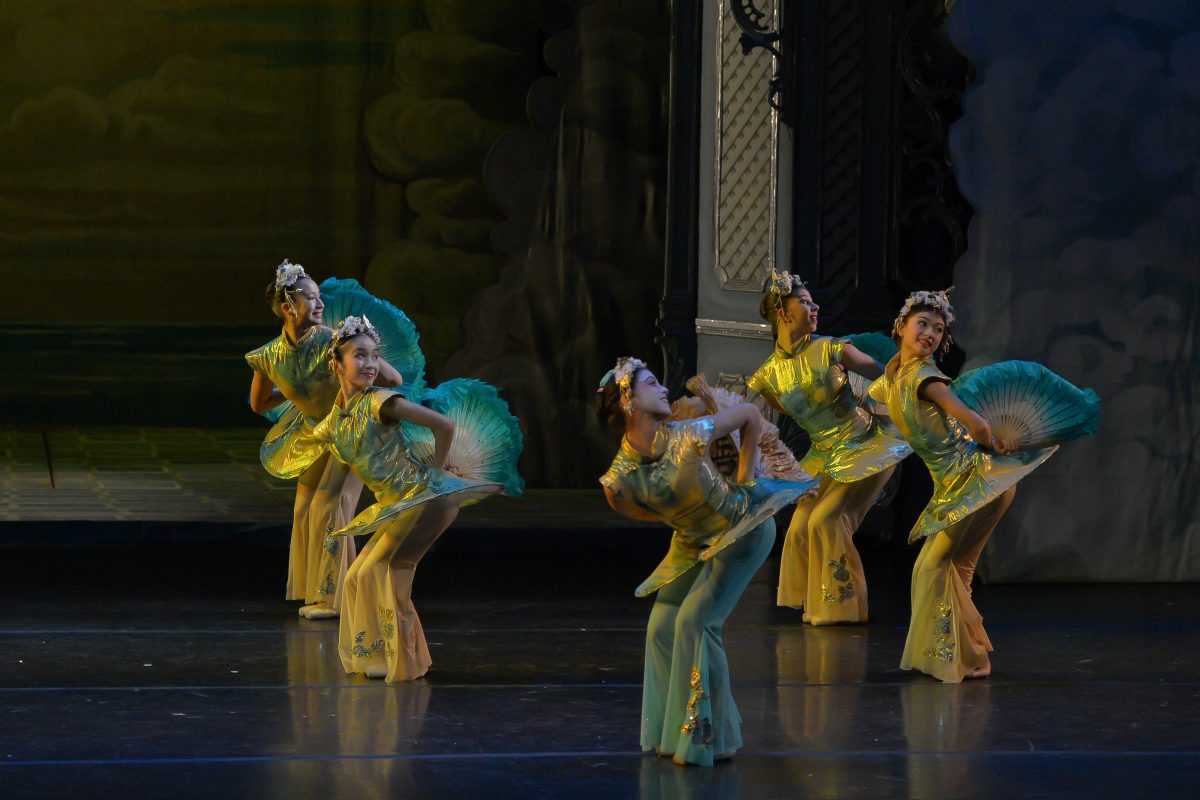 Gelsey Kirkland Ballet members in one of the many exotic dances performed in “The Nutcracker.” (Igor Siggul)
Arts & Culture

NEW YORK—For a joyous family holiday treat, one would be hard-pressed to find something more satisfying than the classic tale of The Nutcracker. Composed by Peter Ilyich Tchaikovsky and first presented in 1892, it’s a story of love, loyalty, danger, and wonderment—all told through the medium of dance.

The gorgeous production is presented by the Gelsey Kirkland Ballet at New York City’s Schimmel Center at Pace University.

Marie (Dawn Gierling) and Fritz (Satoki Habuchi), two young children in a small town in Germany, are enjoying a Christmas gathering at their home, filled to the brim with their extended family of grandparents, cousins, uncles, nephews, nieces, in-laws, and the like.

The adults happily chat while the children enjoy their presents: dolls for the girls and toy soldiers for the boys. In the midst of the festivities, Marie’s godfather and the village toymaker, Drosselmeyer (Marko Micov), arrives and presents a gigantic clock to the family, one complete with three life-size figures. He also gives Marie a hand-carved nutcracker.

Fritz, however, jealous of her present, tries to take it away from her and in the process breaks the Nutcracker’s arm. Drosselmeyer saves the day by wrapping the broken limb in a sling. The Nutcracker is left to guard the Christmas tree that night after the party breaks up and the family goes to bed.

Later than night, Marie goes to check on the Nutcracker and is astonished to see a number of gigantic mice entering the house. The rodents, under the command of the Mouse King (Alexander Mays), threaten Marie and all in her home.

Suddenly, the now life-sized Nutcracker (Johnny Almeida in the performance I witnessed) comes to life, his broken arm miraculously healed, and moves to defend Marie. Quickly realizing the situation, he summons the previously seen toy soldiers from their slumber in the cabinet where they had been placed hours before. The soldiers, now also human size, quickly join the fray, aided by the numerous dolls that arrive to help.

In the end, the Mouse King is killed and his minions routed, but at the cost of the Nutcracker’s life. Yet even as Marie mourns the loss of her protector, the love she feels for him is able to transform the now still figure into a quite handsome human prince. Marie follows the Prince back to his kingdom and eventually arrives at his palace where, at a majestic grand ball, she is crowned his queen.

The most remarkable aspect of this wonderful tale is that the entire story—from the wonderfully choreographed battle scenes to sequences with living snowflakes—is told without a single word being spoken. Indeed, none are needed.

For even if one doesn’t know the story in advance or simply chooses not to read the program notes, they can easily pick up the flow of the narrative as events unfold before their eyes. Everything from the different attitudes of the characters presented to the overall story arc becomes quickly understandable.

One of the most fascinating constants is that every sequence literally looks like it could be part of a sweeping tableau. Or, to put it more seasonally, every moment on stage could easily be part of a department store holiday window display.

Each scene is filled with so much action and nuance it feels like one is watching a wonderfully well-oiled machine. All of it takes the audience into a wonderful world of fantasy. Whether the movements of the characters are deliberately jerky, such as the scene when the toys come to life, or beautifully fluid, as when a group of dancing angels gives Marie the key to the Prince’s kingdom, all come across as perfectly arranged and choreographed.

Great work by choreographer/director Michael Chernov in making it all come wonderfully to life. The story and dancing are powered by the absolutely stirring Tchaikovsky score.

Almeida works wonderfully as the Prince, making him a commanding figure, dancing solemnly and evenly throughout. Gierling is absolutely wonderful as Marie, going from a quiet and shy girl to a beautifully poised and confident young woman, all the while never losing her sense of wonderment as to what is happening.

Micov is good as the somewhat mysterious Drosselmeyer, who may know more than he’s telling concerning what’s about to happen. Also a standout is Charles Klepner as a scene-stealing bugle boy, and also one of the smallest kids at the Christmas party, valiantly trying to keep up with his older and taller relatives.

Chernov’s direction is sure and sharp, keeping the entire piece flowing smoothly and also giving it a proper festive air. The sets are quite wonderful to behold, particularly Marie’s parents’ home, which calls to mind an old-fashioned Christmas card.

Lighting design by Jeff Davis works well, and the costumes are all simply wonderful to look at, from the all-white outfits of the snowflakes to the various colorful yet stern garments worn by the people at the Christmas party (costumes by Jennifer Wood-Bonnell, Lynda Mead, Susan Sandford, Jetty Maika, and Naomi Morin, with costume scenic and costume design adapted by Michael Chernov).

Beautiful from start to finish, The Nutcracker is a timeless treat, and one need look no further than this absolutely superlative production to see why this is so.