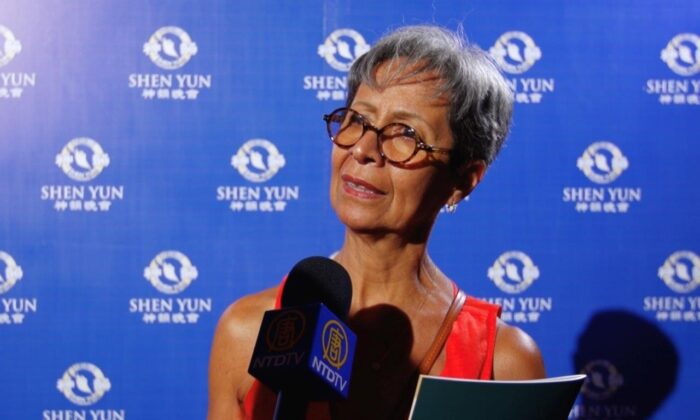 LIMA, Peru—Shen Yun Performing Arts is home to the world’s top classical Chinese dancers, reviving a once nearly lost art form. This especially expressive dance system is often of note to members of the audience who are dancers themselves, like Martha Herencia, a ballet instructor at San Marcos University, who saw a performance at the Gran Teatro Nacional in Lima, Peru on Feb. 8, 2020.

“The male dancers, with those leaps and those acrobatics, but without losing that delicacy of movement and sensitivity, a raw sensitivity.”
— Martha Herencia

“I liked the sensitivity, the delicacy of the movement of the female dancers’ arms, those wonderful backs,” said Herencia, who has dedicated her life to dance since she was a child. “And the male dancers, with those leaps and those acrobatics, but without losing that delicacy of movement and sensitivity, a raw sensitivity.”

Classical Chinese dance is among the most comprehensive and systematic dance systems in the world, much like how ballet has its long history and pedagogy. It is often recognized for its athletic technique, including highly difficult leaps, flips, and other tumbling techniques that have been inherited by sports like gymnastics and acrobatics.

Audiences typically note how expressive the dance is as well, as classical Chinese dance emphasizes “bearing,” or the inner spirit that drives each movement. Herencia elaborated on the effect.

“At times, there was like a certain speed, a certain velocity,” Herencia said. “Other moments, yes, it was more emotions, more lyrical, and it conveyed, it touched more sensitive nerves.”

“The body control, as I say, always conveying all those emotions, communicating the emotions through their movements, all was connected,” she said.

“Shen Yun” means “the beauty of divine beings dancing,” and Herencia felt this divinity in the movements. It’s not a uniquely Chinese thing, but a classical one, she added.

“It is said, from the muse of the dance, Terpsichore, she is always present with the gods. So yes, it is divine,” Herencia said. “There is this connection with the divine.”

“How nice, how nice to have been able to see a performance of this nature,” she said.