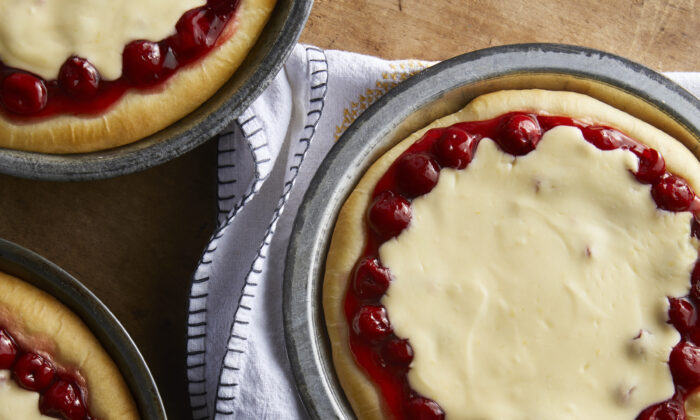 Baking From the Heartland: A Tribute to the Great Baking Traditions of the Midwest

Rich with history, heart, and plenty of butter and sugar, Shauna Sever’s new cookbook is a love letter to her Midwestern roots
By Crystal Shi
Share
FacebookFlipboardTweetRedditEmail
MOREPRINTFONT BFONT S

For food writer and baker Shauna Sever, the Christmas season starts with cookies. Specifically, her Gramma’s heirloom sugar cookies: crispy, sandy, pale golden little discs, roughly flattened with the bottom of a drinking glass and adorned with a shimmer of colored sugars or sprinkles.

“I grew up having those cookies my entire life,” Sever said. “It’s still the first cookie I make every holiday season, the first week in December.”

The recipe, which includes a trio of genius secret ingredients, has was passed down from her grandmother, a treasured heirloom uniquely her family’s own.

Or so she thought.

Then one day, as Sever recounts in her new baking book, “Midwest Made,” while flipping through a vintage Illinois state cookbook, she found the exact same recipe—secret ingredients and all—under a different name: “Mary Todd Lincoln’s Sugar Cookies.” Yes, as in Honest Abe’s wife.

“Yeah, I guess she probably got to this recipe first, then,” Sever writes.

This discovery was among the first that sparked Sever’s idea for her cookbook, an exploration of the great baking traditions of the American Midwest—traditions that run deep, intertwined with immigrant stories and family history and great tales of American ingenuity—told through a mosaic of comforting home-baked goods.

The Midwest is home for Sever, who grew up in Chicago but left for the glitz and glam of California in her 20s, where she began her food writing career. She returned to her home state over a decade later, with a newfound curiosity about her culinary heritage.

But upon her return, she began asking questions—“Where did that really come from?”—and uncovering delightful bits of history: the real roots of her grandmother’s sugar cookies; the “happy accident” that created the St. Louis gooey butter cake; the deep Polish origins of paczki, the beloved filled yeast doughnuts that drive her neighborhood to “near-hysteria” every Fat Tuesday (or Paczki Day, as it’s known in Polish-heavy Midwestern cities like Chicago).

“All of a sudden, I realized that some of these things that I had taken for granted actually had a really interesting backstory… that there’s so much from the Midwest that really is unique, that there’s more history there than you realize,” she said.

In deciding to document them in “Midwest Made,” she had her family front-of-mind: “I wanted to create an awareness about that for my kids, for them to never take those unique things for granted,” she said.

But she also wanted to “do people proud,” she said, to create a book that fellow midwesterners would find familiarity and take pride in—and then share the depth and richness of their food traditions, too often overlooked, with the broader audience they deserve.

Family recipes lie at the heart of the book; after all, they’re “the backbone of Midwestern baking,” Sever writes. (“Bake what your mama (and grandmama, and her mama) gave you,” she lists as one of her “Five Baking Tenets of the Great Midwest.”)

There’s also a collection what Sever calls “quintessential Midwestern recipes,” like the rice crispy treats that disappear at every church bake sale, or the peanut butter blossoms that grace every holiday cookie platter; and a smattering of delightfully kitschy vintage creations, like a berries and cream gelatin mold, or shortbread bars spiked with crushed potato chips.

For some recipes, she doesn’t change a thing (her banana bread is loyal to Mary Ellis Ames’s 1933 original); while others she gives a modern upgrade (that gelatin mold recipe swaps the classic red Jell-O layer for one made with fresh berries, and the non-dairy whipped topping for buttermilk panna cotta).

But the real fun begins when Sever starts digging into the quirks and histories of regional specialties, the iconic cakes and pastries that don’t often leave state—or even county—lines.

There’s Michigan’s bumpy cake, for instance, topped with “bumps” of vanilla buttercream under a draping of thick fudgy icing; or Wisconsin’s Danish kringle, a giant ring of buttery, multilayered pastry stuffed with a fruit and nut filling and drizzled with icing.

Some are hyper-specific: take Chicago’s Swedish flop, a yeasted coffee cake filled with buttercream and jam. “I’ve had so many people in Chicago say, ‘I’ve never seen that recipe in a book, nobody knows about it!’” Sever said. “But that’s what makes it fun—there’s such a great population of people who love it and know it, but there’s a lot of people who don’t [know it].” For the latter, it’s a chance to show them something completely new.

As their names suggest, many of these recipes have roots planted far away. From Sicilian butter cookies to Slovenian potica, they reflect a colorful quilt of immigrant communities—German, Scandinavian, Eastern European, Italian, Greek—still holding tight to their culinary traditions.

Sever pointed to Belgian pie, a yeasted pastry with a fruit filling and sweet cheese topping, as a particularly memorable example. She came across the dessert on a family vacation to the southern part of Door County, Wisconsin, home to the nation’s largest Belgian American population, dating back to 1853.

“It’s just this community of people who are still so into being Belgian,” Sever said. Some families still speak Walloon, a near-dead language spoken in the southern part of Belgium, and every fall, the community celebrates the traditional harvest festival of Kermis by whipping up Belgian pies by the dozens.

“To me, that was just the epitome of a small town upholding this tradition that could so easily be phased out,” Sever said. “It takes real work to keep that alive, especially since no one there now was actually born in Belgium. But it’s up to the people who live there to keep that going.”

And to those people—like Gina Guth, a woman known in the area for making and teaching classes on the pastry and the source for Sever’s recipe—keeping that tradition going is “just what you do,” Sever said.

“That’s the thing that struck me the most about people I met in that community: they were just like, ‘This is something that you do, of course you have to keep your heritage alive. How could you not?’ It’s very much a sense of responsibility that I found really unique.”

Sever does want to clarify something: “This is my Midwest,” she said. Given the vastness and diversity of the region, and unique family quirks, she acknowledges that recipes will look different in different areas. “[For] nothing in this book [am I] saying, ‘This is the definitive way to do this thing.’ That would be the most anti-Midwestern sentiment!”

In that sense, it’s very much a personal cookbook. Much of it was put together by tracing her own history, having conversations with her family members—including extended family she hadn’t often talked to before—about their generations-old recipes and traditions. She encourages other home bakers to do the same.

“Start asking questions,” she said. “I don’t think enough of us take the time to talk to [our] grandmother, or aunt, or mother, and say, ‘When do you remember having this?’ and [trace our] own roots.”

“I think for a long time these sorts of stories were passed on, and I think some people have sort of lost interest in asking those questions. Now we can sort of Google everything, but there are some things that you cannot Google. There are some things that you have to go to the source—go to a relative, or whoever it is—and find out where it came from. There’s a lot revealed in those questions about your own family and where you come from.”

And as Sever has found, it’s often pretty sweet.