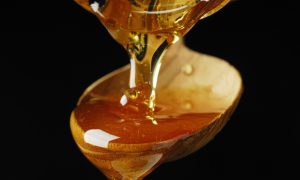 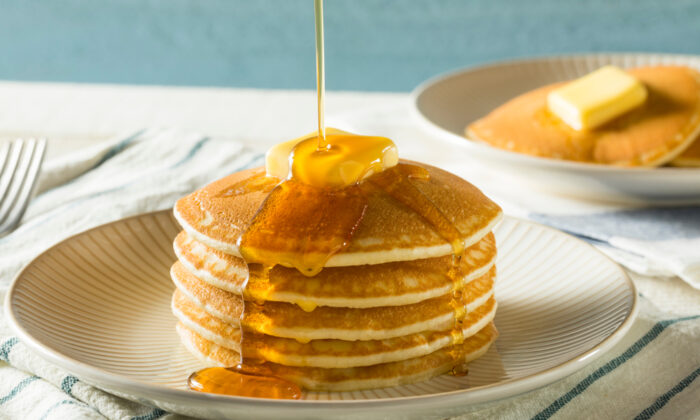 My daughters call Jim's homemade syrup “Pop's Sauce,” after their name for their grandfather, and love to pour it over their pancakes with a generous side of sprinkles on Saturday mornings. (Brent Hofacker/Shutterstock)
Food & Dining

Every winter, my father-in-law makes maple syrup from his own trees, to share with his grandchildren
By Rachael Dymski
biggersmaller
Print

The driveway of my in-laws’ 10-acre farmette is lined with Autumn Blaze Maple trees, which are every bit as stunning as they sound during the fall months. My sister-in-law was married there, in the thick of fall, while all 19 of those maples burned red in the backdrop of the altar. As pretty as they are, my father-in-law, Jim, didn’t plant them just for looks. He dreamt of using the trees on his own land to make one of his favorite treats: maple syrup.

“When I was a boy, we used to visit another family in Bemus Point, New York,” said Jim. “They used to tap maple trees for syrup. Some of my best memories from childhood are getting to be involved with that process.” He remembers putting the sap buckets out and making maple syrup candies when the syrup was ready.

Jim so fondly remembered these experiences that he wanted to create the same environment in his own home.

“I want my grandchildren to be able to trudge through the snow with me, and put the buckets out by the trees,” he said. He wanted them to know the process of boiling down sap to make sweet, sticky syrup. He planted the maples 20 years ago and waited patiently for them to be old and healthy enough to tap.

In January, when the Central Pennsylvania temperatures still drop below freezing at night but rise above freezing during the day, the sap starts to flow. Jim walks around to each of his maple trees and drills a hole into the trunk, then caps it with a metal spike and hangs a bucket on the end. For nearly two months, the tree will drip sap through the spout into the bucket below.

On those quiet, winter mornings, Jim walks the frozen path down by the trickling stream to check on his trees. When the buckets are full, he drives around the property on his four-wheeler, collecting the sap.

“The best part about making maple syrup,” said Jim, “is that it can be as simple or as complicated as you want to make it.”

His own process for turning the sap to syrup has evolved and shifted over the years.

“When I first started out, I boiled the sap on the grill,” he said. “After I got more into it, I bought a maple evaporator. It takes about 40 gallons of sap to make one gallon of syrup, so you’re cooking for a long time if you’ve got a small container.”

The sap has to be brought to about 219 degrees in order to turn to syrup. At that point, he transfers the syrup to a smaller pot to finish it. The syrup is filtered through a cheesecloth for any impurities.

Jim’s syrup is something of a delicacy in our house. My daughters call it “Pop’s Sauce,” after their name for their grandfather, and love to pour it over their pancakes with a generous side of sprinkles on Saturday mornings. I could eat it as its own course, but lately, I’ve been adding it to my baked goods for a different flavor.

A few weeks ago, Jim and his wife Lisa came up to our house for dinner. I wanted to make something special with Jim’s maple syrup as a surprise for him. After researching my options, I decided to make an Old Vermont burnt sugar cake with maple cream cheese frosting. It just felt like the kind of cake that embodied Jim’s memories of tapping maple syrup in the snowy outdoors with his family when he was a child.

I wanted to show him how much we appreciate the work he does for each and every tablespoon of his maple syrup—and to be honest, I wanted to ensure that we continue to receive it from him.

In the cake, I decided to substitute sugar in the recipe for maple syrup. The burnt sugar gives the cake a caramel-like flavor, which feels warm and nostalgic. As I whisked eggs and butter, I thought about how Jim’s hobbies do so much to shape the culture of our extended family.

Jim doesn’t just make syrup. He also keeps bees, raises cows for beef, shears sheep for wool, and is becoming an avid bird watcher. He invites his children and grandchildren into each of his hobbies.

As a result, my own girls know so much about where their food comes from. They are connected to the syrup, the honey, the meat, and the eggs we get from their chickens in a way buying from the store could never provide. My girls have a relationship with their food that is dynamic and rewarding. They engage with it differently because of their grandfather. They haven’t yet trudged through the snow carrying a metal bucket, but they can point out the maple trees to me and where the sap buckets are, which is a lot more than I knew at their age.

The cake was good, but the maple cream cheese frosting was the real star of the evening. A little bit of cream cheese and butter highlighted the sweet syrup in a way that turned the cake from good to a showstopper.

After Jim took his first bite, I told him that it was made with syrup from his trees. When he smiled at me in return, I got a small taste of the satisfaction I think he gets from making so many memories around food with us.

It’s important to make sure both the butter and cream cheese are at room temperature, to prevent lumpy frosting.

Makes about 3 cups, or enough to frost one 9-inch layer cake

In the bowl of a stand mixer with the whisk attachment, beat the butter on medium speed for about 1 minute. Add the cream cheese, and continue to beat for about 2 minutes, until smooth and blended together.

Add vanilla and continue to blend. Add in the maple syrup. Mix on medium-high speed for about 5 minutes. When the frosting is well blended and smooth, it is ready.

This frosting will keep in the refrigerator for up to a week.