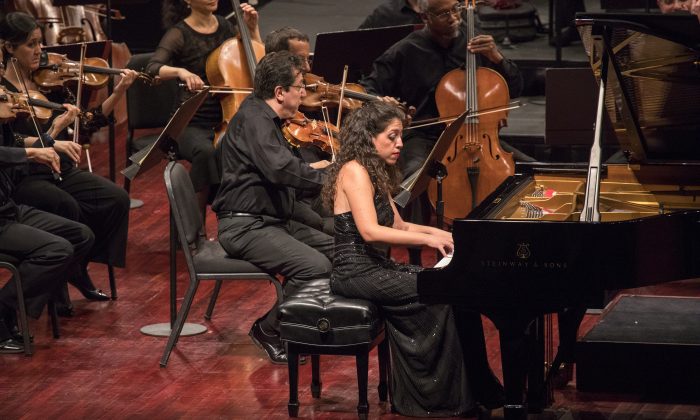 Bach and Beethoven at Mostly Mozart

NEW YORK—The Mostly Mozart concert on Aug. 4 may be best remembered for marking the New York debut of Beatrice Rana, but the orchestral pieces were equally stunning.

The 24-year old Beatrice Rana demonstrated why she is being hailed as a rising star with a pre-concert piano recital of a Bach piece, and she performed as a soloist with the orchestra.

The pre-concert recital, included at no extra charge, was certainly worth having to show up an hour early. Rana, who was recently named Newcomer of the Year in the BBC Music Magazine Awards, played Bach’s Partita No. 2 in C minor (1727).

Musicologist and Bach-expert Malcolm Boyd has called the Capriccio part of the Partita, “a graveyard for all but the most nimble-fingered executants.” Rana, playing from memory, has such a stupendous technique that she easily overcame the technical challenges. She remained in full control throughout the six movements, which range from the stately Sinfonia through the dances (Allemande, Courante, Sarabande, and Gigue), and ending with the Rondeaux and Capriccio. At times, in some of the faster passages, Rana sounded as if she had four hands. It’s easy to understand why her Bach playing, for example, in her recording of “The Goldberg Variations,” is so highly touted.

The main concert conducted by Louis Langrée was all Beethoven (1770-1827), (who incidentally wanted to study with Mozart but didn’t have a chance to do so). The orchestra started with the “Egmont Overture” (1809–10), a piece Beethoven composed as part of incidental music for Goethe’s tragic play, “Egmont.”

The orchestra and soloist meshed perfectly.

The drama exemplified the composer’s lifelong concern with the struggle for freedom. The title figure struggles against the evil Duke of Alba. As in Beethoven’s only opera, “Fidelio,” the woman whom Egmont loves comes with the intention of rescuing him. The main difference is that in the Goethe play she fails and Egmont is executed. However, the oppressed Dutch people are inspired to overcome their Spanish oppressors.

A rousing beginning of the orchestral concert, the Overture provides a basic summary of the action, starting slowly to represent the Spanish domination and then rises to the ending with the triumph of liberty. Goethe himself praised Beethoven’s music for his play.

Rana returned as the soloist in Piano Concerto No. 1 in C major (written in 1795 and revised in 1800), which she performed with a cadenza by the composer. Beethoven, who was better known at the time as a pianist than as a composer, first played the work as the soloist at a concert honoring his teacher, Josef Haydn. (Beethoven is thought to have improvised the cadenza at the debut concert but later wrote down two alternate cadenzas.)

The work begins with a slow march, leading to the pianist’s entrance. There is a lyrical section, clearly influenced by Mozart. The march rhythms return in the Largo and the Allegro finale concludes with a flourish of excitement. The orchestra and soloist meshed perfectly.

After the intermission, the orchestra returned for Beethoven’s Seventh Symphony in C major, Op. 92 (1811–12). Again, this was a work about fighting for freedom. The composer first performed it in 1813 at a benefit concert for soldiers who had been wounded at a recent battle against French forces.

Commentators such as Richard Wagner have spoken of the Seventh Symphony as a bacchanalian dance. The agile conductor, Langrée, was so animated that at points he seemed to levitate. The orchestra played the haunting music and the later celebratory ending with great intensity. The finale brought the audience to its feet.

Despite this Beethoven concert, this year the Mostly Mozart Festival focuses special attention on Franz Schubert.