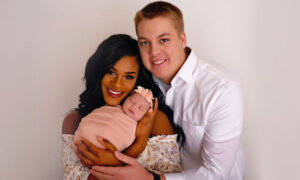 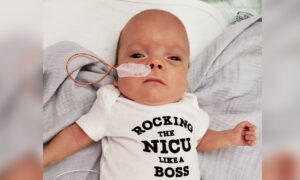 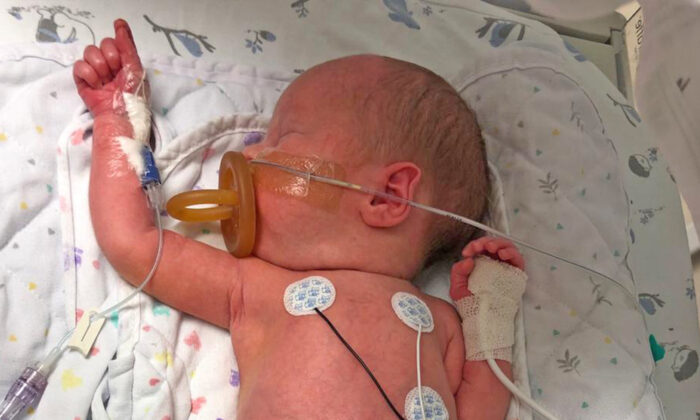 When a baby was born in South Africa, he had to undergo major surgery just moments after his birth as his entire small intestine was developed outside his tiny body instead of inside due to a rare birth defect.

Juan-Luc Language was born on July 28 to parents Melize, 26, a teacher, and Juan, 31, a technician at 34 weeks’ gestation. The little boy was born via a cesarean section and weighed 4.1 pounds (approx. 2 kg).

The couple was informed that Juan-Luc suffered from gastroschisis in their third month of pregnancy, but they weren’t aware of what form it would really take until he was born.

According to the CDC, gastroschisis occurs in the early stages of pregnancy when muscles that make up the baby’s abdominal wall do not form correctly. When the baby is born, a hole forms close to the belly button and can be large or small. This allows the intestines and other organs such as the stomach and liver to extend outside the baby’s body.

For Juan-Luc, this meant that he needed to undergo surgery almost immediately after he entered the world. The parents, who hail from Jeffreys Bay, were forced to relocate to Cape Town so that pediatric surgeon Professor Brown, who specializes in neonatal surgery and pediatric gastroenterology, could perform the operation.

Juan-Luc then underwent the standard surgical procedure for babies with this condition. Medline Plus explains, as “[t]he infant’s abdominal cavity is too small for the intestine to fit back in at birth,” a surgery where “a mesh sack is stitched around the borders of the defect and the edges of the defect are pulled up,” occurs.

This so-called mesh sack is called the “silo.” Gradually, in a few weeks, the intestine returns to the baby’s abdominal cavity and the defect is closed. However, throughout the recovery, the baby is extremely vulnerable to infection and has a very hard time processing its mother’s milk.

“Juan and Melize knew there would be additional medical costs and tried to make provision for this,” she explained, “but after receiving the first bill it’s clear that the scope of the charges is much more than they could have ever imagined.”

Thus, in order to support the young family, the aunt set up a GoFundMe page.

As of September, Juan-Luc has been at the hospital for 38 days. He might have to stay for up to three months depending on how quickly his digestive system can start functioning on its own.

At the time of writing, the baby’s mother, who posts regular updates of him on Facebook, explained that the doctors have increased his daily consumption of milk to 50 milliliters (1.69 ounces) and he has put on a little weight, bringing him to about just under 7 pounds (approx. 3 kg).

His family is relieved and delighted to see how well he is progressing. The silver lining for the Language family is that most babies with gastroschisis go on to make a full recovery. Given how far Juan-Luc has already come, there’s every reason to hope for the best.