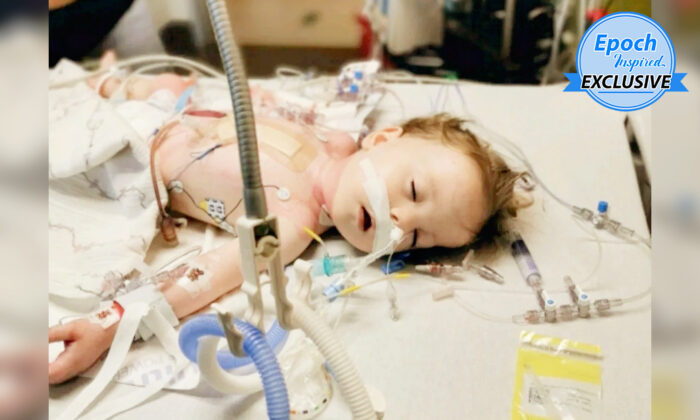 A baby born with congenital heart disease and a condition where her esophagus didn’t develop properly has endured 26 crucial surgeries in her life so far. Now a bubbly, bright 4-year-old, she is living her best life.

Dawn Matieschyn, 38, of Langdon, Alberta, opened up to The Epoch Times about her daughter Faith’s resilience, her own grief, and what it took to overcome a heartbreaking start to the life of her daughter.

Faith’s official diagnoses are six-vertebrae “long gap” esophageal atresia, epilepsy, and Shone’s syndrome. However, Dawn and her husband Joel, 41, knew something was wrong early on in the pregnancy.

“By eight weeks, I started to feel pains very low in my stomach that closely resembled symptoms you expect much later during pregnancy, and I was puzzled,” Dawn said. “I recall jokingly telling my husband I felt like I was ‘showing much faster,’ and wouldn’t be surprised if I had twins in there.”

At Dawn’s 18-week ultrasound, a specialist broke the news that Faith’s esophagus was not properly attached. Hearing this unexpected news made Dawn devastated.

“I told Joel of the news once I got outside and felt like my world was crashing down; I couldn’t breathe,” Dawn said. “We had miscarried just prior and waited so long to have another child.”

“We never expected this situation to happen; our son was perfectly healthy,” she added, referring to her 9-year-old son, Ryker, “and neither of us have relatives with genetic conditions.”

By 29 weeks, Dawn had developed polyhydramnios and irritable uterus syndrome. In unbearable pain, she was put on two months’ hospital bed rest.

Joel, a then-electrician, worked hard for the family in Edmonton while Dawn’s mother-in-law cared for Ryker, lifting her spirits with regular hospital visits.

Faith was delivered by Caesarean section at Foothills Hospital, Calgary, at 37 weeks and 5 days. Terrified to meet her fragile baby girl for the first time, Dawn recalled: “My heart was pounding and my mind was racing with overwhelming feelings of unknowns and uncertainty.

“I was taken down to see her in the NICU and they placed her on my chest. I felt so much love and relief that she was able to breathe with the help of oxygen, and was delighted to hear she weighed over 6.5 pounds.”

Joel snapped a precious photo of Dawn’s first special encounter with Faith before she was whisked away.

Faith, who had a 9-centimeter blind-ending pouch, could not swallow saliva or eat food; she needed suction and gastric feeding tube surgery on her second day of life so that she could get food into her stomach.

Joel accompanied the little girl to the Children’s Hospital.

Meanwhile, Dawn, who had just had a C-section a few hours prior, was determined to join them. When a nurse caught her walking down the hospital corridor, clutching her IV drip and screaming in pain, she “couldn’t believe her eyes,” said Dawn, “but all I could think of was seeing my baby. The nurses loaded me up with pain meds, and off I went.”

It was upon learning that Faith needed heart surgery that Dawn fell apart. Praising Joel for being an “absolute champion,” holding and loving their baby, Dawn admitted she felt crushed by reality.

Not being able to breastfeed made matters worse. Dawn started experiencing panic attacks, often retreating to Ronald McDonald House where the family was staying.

“The excessive sounds, alarms, and beeping are deafening, and cause a constant stream of adrenaline,” she explained, claiming, “there is a feeling that it’s not your child; it’s theirs.”

Unable to comfort Faith the way she would, Dawn says it resulted in a slew of mental health issues.

“I breastfed my son, and my whole body kept telling me that I was failing Faith,” Dawn lamented. “I couldn’t experience the amazing rush of love hormones a mother feels when breastfeeding … when I held Faith, my heart, mind, and soul felt a searing, knife-like pain.”

Fighting back the tears, she began communicating more about her feelings and began a medication that helped reduce her anxiety.

Later, help came from an older nurse who recognized Dawn’s pain. She encouraged the mom to try skin-to-skin contact, and this time it worked; Dawn’s stomach fluttered with love and she felt hopeful for the upcoming journey.

“This nurse explained that even though my parenting journey looked different, Faith and I would still end up with a rock-solid bond,” she recalled. “I choose to think that God put her directly in my path that night.”

However, Faith’s condition has caused her to undergo 26 surgeries in the short course of her life: 22 on her esophagus, and 4 on her heart.

After her first esophageal procedure, the little girl suffered cardiac arrest. After her third heart surgery, she caught a UTI and severe flu. There were times when her parents feared she wouldn’t pull through.

Yet the day she sat up by herself, Dawn and Joel felt a weight leave the room, “like God Himself came and gave us all a much-needed hug,” Dawn said.

As for Faith, she recently turned 4. She still can’t eat normally; her food gets “stuck” over twenty times per day, causing her to vomit and making her breathing labored and she still needs monthly surgeries to keep her esophagus open.

Yet the courageous girl has been in a state of “just under critical condition” for 1 1/2 years now.

“She is fierce, and incredibly brave,” Dawn said. “Seeing Faith’s strength and resilience has helped me to not feel sorry for myself … well, at least not too often.

“I believe that God chose me to be her momma for a reason. I was scared and lacked confidence before she was born, and now I can face all of Faith’s challenges with ease, grace, and a whole lot of love.”

The family has weathered Faith’s storm together, including downscaling from their five-bedroom home to a two-bedroom condo during Faith’s hospital treatment. Yet Dawn and Joel insist on focusing on the positive, including the people that have helped them.

When Joel lost his job in Edmonton for taking paternal leave, the struggling family had to move suddenly. A family friend lent his 24-foot trailer and a crew of six men to the task, free of charge. The gesture meant everything to Dawn.

“It’s the most incredible feeling when you know in your heart that God is helping you get through such difficult times, and feel His loving hands upon you,” she said.

The industrious mom also started an online company, Faith and Love Thrift, selling new and pre-loved clothing, which allows her to work from home. A portion of all sales goes back to Ronald McDonald House in honor of Faith’s journey, and others like her.

The “insanely funny, independent” 4-year-old is learning new things every day, her limits, and begging her parents to start school. If you met her, says her mom, you’d never know she was born different.

When she’s not busy reading, singing, dancing, playing with her beloved healthcare aid, Mandy, or “running around like crazy,” Faith loves nothing more than being with her big brother, who has never left her side.

Fourth-grader Ryker, who spent seven months at the Ronald McDonald House to be near his sister, is busy catching up with his peers at school. He is worried that Faith may, one day, face bullies and insists he will always protect her.

Dawn hopes other parents of children with the same condition can take inspiration from the courage she has cultivated.

“Ask as many questions as you can,” she implored, “rest when you need to rest, and ask for help immediately; don’t wait until you experience burnout or a mental breakdown.”

Dawn and Joel’s tactic is to communicate constantly. In doing so, they have beaten statistics and kept their family together, despite the immense strain of parenting a sick child.

Dawn now chronicles life with her family and “loving, happy” Faith on a dedicated Instagram page.

“The best moments parenting Faith are knowing that she has helped all of us feel and appreciate a much deeper meaning of life, and taught us to love in ways that most people may not ever get to experience,” the mom-of-two reflected. “The wisdom and patience gained is immeasurable.”