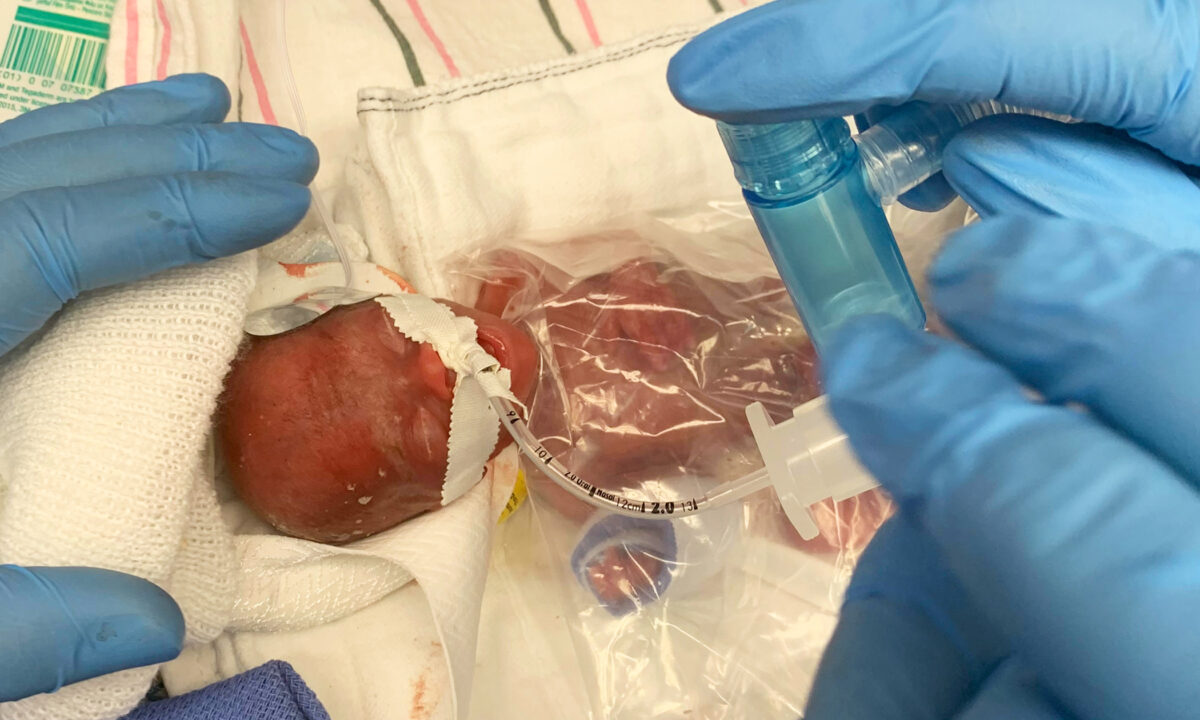 The smallest baby ever to be born, and survive, in one Indiana hospital’s NICU has finally been discharged after 6 1/2 months. She headed home with her elated parents and has been doing well.

Baby Audrey was born to first-time parents Brooke and Tim Mead of Southwest Michigan on Thanksgiving, 2021. She weighed just 10.9 ounces (310 grams) at birth.

Brooke, who learned that she was pregnant with Audrey in July 2021, told The Epoch Times that she experienced a normal pregnancy until an anatomy scan around 20 weeks flagged some issues.

“Audrey was measuring a few weeks behind, and I had a ‘spot’ on my placenta that we later found was dead tissue from having preeclampsia,” she explained. “My blood pressure was slightly elevated, and became dangerous around 22 weeks.”

Brooke was admitted to Memorial Hospital in South Bend, Indiana, for preeclampsia which developed into HELLP syndrome, a rare pregnancy complication. A week after her admission, she gave birth emergently via Caesarean section.

Baby Audrey was one of the smallest babies the NICU had ever delivered. She had a chronic lung disease and a rare eye disorder due to her prematurity. Her prognosis was worrying.

“Initially, my husband and I were terrified,” said Brooke, who works at Memorial Hospital. “We were told there was a 30 to 50 percent chance of survival for her. We prayed to God every day that she would make it.”

Baby Audrey was on a ventilator for three months. Her hands-on parents were very involved in her care at the NICU, changing diapers, helping with oral care, reading and talking, and practicing “kangaroo care” for skin-to-skin contact.

“From the beginning, Audrey was very active, and that gave us hope,” said Brooke.

Audrey was transferred to Advocate Children’s Hospital in Park Ridge, Illinois, to be treated for the eye disease retinopathy of prematurity (ROP), and spent a total of 6 1/2 months in hospital before being discharged on June 6, 2022.

Grateful parents Brooke and Tim thanked their hospital care teams, and after three weeks at home with her baby, Brooke claimed Audrey was “doing great!”

The Meads first met in high school in 2011. Both attended Southwestern Michigan College—Brooke earned an associate degree in medical assisting, Tim in accounting—and married in 2019.

The homecoming of their record-breaking baby girl is also a huge victory for Memorial Hospital staffers, who will miss her presence in the NICU. During her stay, Audrey earned the nickname “The Secret-Keeper” among her nurses.

NICU nurse Emily Fredericks told WNDU, “We’d come in and hold her, read her stories. She knows all the drama, all the gossip, so we’re really, really gonna miss her around here.”

Dr. Basharat Buchh, MD, Audrey’s NICU doctor, added: “Not everybody that is born in the NICU, or taken care of in the NICU, does well. But it’s moments like these, the days that kids like that go home, that keep us going, give us immense joy.”