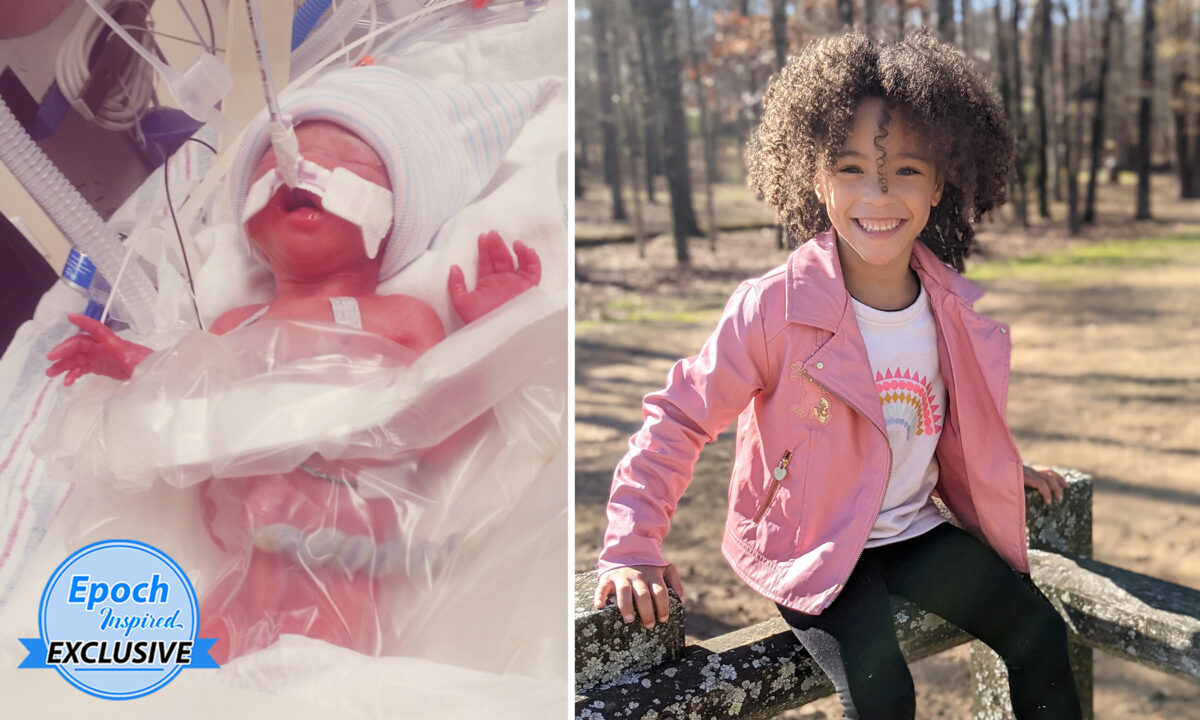 A baby girl born 14 weeks early and weighing less than two pounds has beaten the odds by surviving without any lasting health issues. Today, she’s a happy, curious 6-year-old who has become an entrepreneur alongside her grandmother, who owns a “slice of paradise” on Earth: a working farm.

Kai Ferguson’s original due date was Christmas Eve 2015, which is also her father’s birthday. But she was born into the world in September instead and spent more than three months in a neonatal intensive care unit (NICU). While her parents kept a track of the everyday statistics of “what could go wrong” with her, the tiny Kai proved she was mightier than her ordeals.

Today, she’s thriving. The budding businesswoman also shares a special bond with her grandma and her farmland, where she explores the wonderful nature around her.

“She is very outgoing, full of energy, and fearless. She is doing amazing,” her mom, Krista, a tax manager from North Little Rock, Arkansas, told The Epoch Times. “Academically, she is already several grades ahead, and, looking at her, you could never tell she was born early.”

“It went pretty quick, since I did not find out until after the first trimester, and [Kai] was born at 26 weeks. But everything seemed to be normal, and she was growing as expected,” she said.

More than three months ahead of her scheduled due date, Krista felt that something was wrong and went to the emergency room.

“My husband worked early that morning, so I told him he didn’t need to go,” she said. “They ran a few tests at the hospital and sent me home, saying there was nothing wrong. I went in to work that day … by about 2 p.m. I was in really bad pain.”

Krista had gone into labor and was sent to UAMS Medical Center Labor and Delivery. After her water broke, a doctor told Krista to start pushing immediately. Baby Kai came into the world on Sept. 16, 2015. Weighing just one pound 12 ounces, Kai was rushed to the NICU to be placed in an incubator.

Everyone was “very nervous and panicked,” according to Krista.

“She was incredibly tiny,” she said. “The first time I saw her was when she was in the incubator. I was so happy to see her, but it also was very hard to see someone so tiny hooked up to all those machines.”

Kai remained in the hospital until Christmas Eve morning, the day she was supposed to have been born. Krista said that time was a “very long” three-plus months, with the first half being the hardest to bear as fragile Kai was still in an incubator and couldn’t be held without a nurse present.

Krista returned to work four days after Kai was born; but she visited the hospital before and after work, and the NICU had cameras, allowing her to check up on her baby.

“The nurses that worked in the NICU were incredible and would call me anytime there was an update, positive or negative,” she said. “They would also make cute signs to put next to Kai in the incubator that they knew I would see on the camera: ‘Hi Mom!’ ‘I’m having a great day!'”

Over the months, Krista and her family saw Kai grow and thrive. Six years on, their preemie daughter is doing well.

“She loves doing art, singing, playing the drums, and playing outside on her grandma’s farm,” Krista said. “We have been so incredibly lucky that she has had no long-term effects of being born so early.”

Thriving in the Lap of Nature

Kai has a special bond with her grandmother, Cathy Messer, whom she calls “Gummy.”

Cathy, 64, owns a pizza franchise. She has also run a small 13-acre farm in central Arkansas since 2012 with an old high school friend with whom she reconnected after being widowed 15 years ago.

“Because we were both novices, all of our animals were ‘minis’—Mediterranean donkeys, Dexter cows, Nigerian dwarf goats, Bantam chickens—and the farm was named Middle Earth Farm,” she told The Epoch Times. “There’s woods, pasture, a lovely pond, and gardens everywhere. It really is a little slice of paradise.”

Cathy loves to share the farm with her grandchildren, which has helped her to encourage them to “learn to appreciate simple things.”

“With their lives full of school and computers, video games, and after-school activities, I think it’s good for them to slow down,” she said.

Since Kai was born, Cathy has been her afternoon caretaker. The little girl and her 4-year-old brother adore spending time with their grandmother in nature, rather than playing video games or watching TV.

“She’s naturally curious and asks a lot of questions. I used to brag that Kai was the only 2-year-old who could tell the difference between ducks, chickens, and guineas,” she said. “Whereas Mommy and Daddy have a beautiful ‘city’ house, Gummy has ‘really good dirt.’

“It’s funny. They still love to come out here to play. Even with toys, tablets, and TVs, they choose to play with rocks and logs. It’s a wonderful place to explore and learn.”

Naturally curious Kai overcame her trepidation toward “stinging bees” on Cathy’s farm as well, even asking her grandmother for her own beekeeping suit and hive to care for. When the farm increased its hives from two to nine, Cathy allowed Kai to paint one hive near the house and visit it often.

Before long, Kai discovered that her “busy bees” could provide much more than a fascinating display.

“We examined chunks of bees wax, tasted some full of honey, and I explained that their wax was useful too,” Cathy said. “Kai has always loved ChapStick. When we were examining the beeswax, I told her that it was a big part of her ChapSticks.

“We looked online for simple lip balm recipes and found one that included beeswax and honey. Kai named it herself, saying it ‘made your smile shine.'”

Boasting a photo of Kai on the label, a handful of Smile Shine lip balms found the perfect recipients: nurses at the UAMS NICU.

The annual UAMS NICU reunion is “always a well-attended, happy event,” Cathy said. An excited Kai gifted her former nurses a tube of Smile Shine each, plus a $500 donation from 500 lip balm sales to help other babies in their care.

“Kai was eager to help,” Cathy said. “The NICU was surprised and happy to receive the donation, and even more impressed that it came from one of their past tiny patients!”

Kai sold all the Smile Shine that she and Cathy made together to family, friends, and locals. The industrious duo hopes to make more after their bees have gotten “busy providing some more beeswax.”