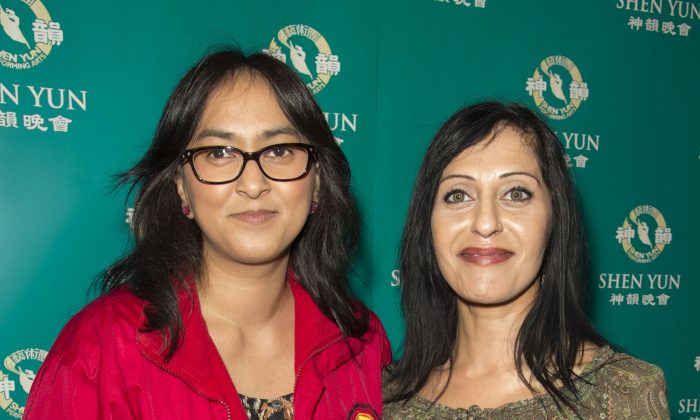 BIRMINGHAM, United Kingdom—Headteacher Sofina Islam OBE is a woman with global vision. On Sunday afternoon she gave 30 children from Stanton Bridge primary school in Coventry the opportunity of a lifetime to see Shen Yun Performing Arts at the International Convention Centre in Birmingham.

“We decided it was a great opportunity to get children to experience a different culture so that they can develop culturally and spiritually,” she told NTD Television during the interval. “What better way than to bring them to an event like this, for them to see it on the stage, a live performance, something they won’t often get an opportunity to see.”

New York-based Shen Yun’s mission is to revive China’s traditional divinely inspired culture, according to their website. Every year they produce an all-new performance that showcases classic stories and legends from across China’s 5,000 years of documented history up to the present day, together with ethnic dances, solo vocal and instrumental performances, and a unique orchestra that blends Eastern and Western instruments.

“It’s an amazing show,” Mrs. Islam said. “The artistry behind it is amazing. Words can’t describe it! You have to see something like this to believe and understand its impact on the audience and those who are watching.”

The inner-city primary school has 475 pupils, but they could only choose 30 students to take to the performance. “It was a very difficult decision to make,” Mrs. Islam said. She hopes that when the children go back to school they will be able to share their experience with the other children so the whole school will benefit.

Mrs. Islam was awarded an OBE in 2014 for services to education. She is dedicated to inspiring and encouraging her students to learn about different cultures so that they can be more appreciative and tolerant of people from different backgrounds, and be comfortable wherever they are in the world. Birmingham, in particular, is a multicultural city.

“The opportunity to experience something like this is phenomenal for [our children],” said Mrs. Islam. “This is a lifetime opportunity for some of our children and it will stay with them for the rest of their lives. You can just see from their reactions they are just besotted, absolutely besotted, with this experience.

“For children to reflect on performances such as these, something that isn’t close to them at home, helps them to understand the global society and the multicultural society we all live in. To be able to experience what they’ve experienced today enables them to appreciate society as a whole.”

Woven throughout a Shen Yun performance are universal values such as tolerance, compassion, loyalty, and courage. Particularly in the story-based dances, the characters “embody the most exalted virtues of Chinese civilization, and convey a message or moral that is still relevant in our day,” according to the Shen Yun website.

“I’m so proud to be a part of the school, so proud to be with these children, they are just completely taking in absolutely everything,” said Mrs. Raja. “This is what they need! They need performances like this for them to enrich their own personal lives, for them to actually enrich other people’s lives as well.”

Shen Yun Performing Arts will next perform at the Lyric Theatre, The Lowry, Salford Quays on March 31 and April 1 before continuing their European tour.