Authors Cherish the Artistry and Spirituality of Shen Yun 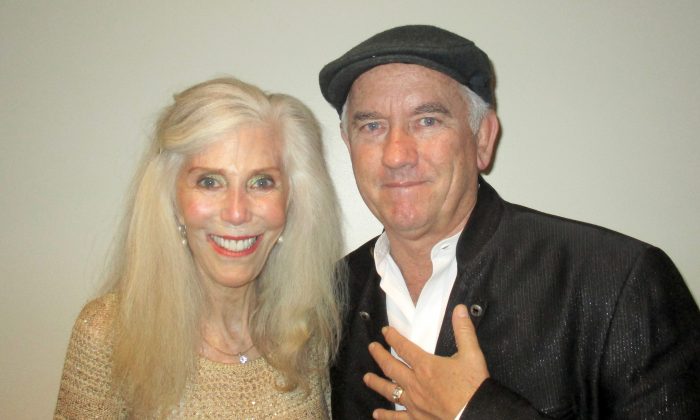 ESCONDIDO, Calif.—Authors Rick Ireton and Jan Spiller drank in the brilliant artistry and spirituality of the ancient legends, myths, and the modern day tales of China on the evening of Jan. 28.

The California Center for the Arts was once again the setting for Shen Yun Performing Arts as the company begins its 2016 global tour.

Mr. Ireton has written several books, and has a predilection for themes of love and spirituality. Ms. Spiller is an author of some best-selling astrology books. Her books have been published in 17 languages, including Chinese.

“It brought tears to my eyes,” Ms. Spiller added. “I was so moved by the courage of these people to come here and with their artistry, perform the arts of [ancient] China for the world.”

A group of world-class dancers, musicians, and vocalists who practice the cultivation practice of Falun Dafa came together in 2006 to form Shen Yun Performing Arts, a non-profit. They train in upstate New York and focus on bringing back to the world the rich, ancient Chinese culture.

However, Shen Yun is banned in China because free speech and the expression of spirituality is something communists fear.

“I loved it. I loved it,” said Ms. Spiller. She thinks Shen Yun’s performance is a perfect manifestation of their purpose and that that purpose should be spread everywhere: “A spiritual message, and it’s a beautiful thing.”

In addition to the fact that Shen Yun cannot perform in China, Falun Gong has been persecuted there since 1999.

Ms. Spiller’s eyes filled with tears as she spoke about a particular dance.

“The Steadfast Heart’ takes place in contemporary China. A couple join with others to practice the spiritual meditation practice Falun Dafa, but the CCP police arrive just as they are to start their morning exercises. The police beat and arrest them, and the husband is struck down and arrested. After torture in the CCP jail shatters his mind and body, a heavenly scene of salvation unfolds, bringing divine grace.

Mr. Ireton is familiar with this struggle, and has always wanted to help and let people know what the CCP is doing to practitioners of Falun Dafa.

“I’m grateful for this [performance], that they would get the word out about the condition of people just trying to be who they are naturally,” he said.

“We’re spiritual beings, we’re beautiful, we should be able to express our beauty. It’s odd to me that China would frown on this sort of teaching and expression of their [ancient] culture that’s so beautiful.”

“My thoughts on China trying to squelch the light of the people—it is like trying to stop a flower from blooming, or a bird from singing.” Continuing his thoughts, he said, “or us from singing or loving.”

“It’s like how can you do that? I’m trying to rationalize the thinking, and [the CCP] must be afraid of the human spirit and what would happen to people as we find our self in masses and truly begin to love one another, as we are loved,” he said.

Mr. Ireton thanked Shen Yun for their courage and effort” “It’s a labor of love. And it’s beautiful and I commend [Shen Yun] for doing such a beautiful job!”

“The light drives out darkness,” he said, and the more that this performance is shown, and the more people recognize their own “darkness, … it will [be] overcome.”