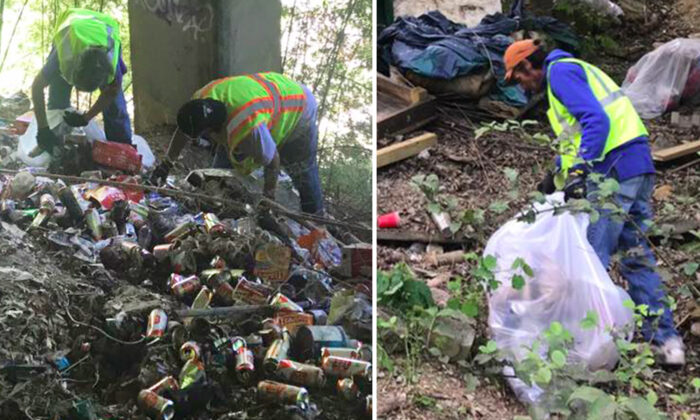 (Photo courtesy of The Other Ones Foundation)
Life & Tradition

On the one-year anniversary of an Austin non-profit’s new homeless outreach program, the team behind the initiative is celebrating success. The program pays homeless people $15 per hour to clean up public spaces, and it’s working so well that it’s going to expand twofold.

The homeless often encounter numerous obstacles to finding gainful employment. According to Austin Echo, the 2019 Point in Time Count revealed that there were 2,255 people experiencing homelessness in Travis County on any one day.

In October of 2018, Austin’s The Other Ones Foundation responded to the crisis by inaugurating its Workforce First program. The program provides the homeless with jobs outdoors in a bid to help them find their feet, look toward saving for permanent housing, and reduce panhandling.

“Most of the time we are in green spaces, kind of like out in the wilderness, working, picking up trash,” said Chris Baker, executive director of The Other Ones Foundation, who was once homeless himself.

The program has so far provided more than 130 jobs, amounting to over $100,000 in earned income going directly into the pockets of homeless or at-risk employees.

Gilbert Palacios, one of those employees, was hired in February of 2019. Palacios claims that Workforce First has changed his life.

“It means a lot,” he said in an interview with KVUE. “You can have money in your pocket. You can have confidence. You can buy your own bus tickets, or whatever you need.”

Looking to the future, Palacios now has renewed confidence that he can find a full-time job and permanent housing. “People can say, ‘Hey, look at that. Do you remember him? Look at him now,’” Palacios mused.

Baker sees encouraging, visible changes in a great many of his employees. “When they come in, there’s so much desperation, so much isolation,” Baker said. “They become a member of our community and then they really start taking the steps necessary to get into the housing to get full-time jobs.”

According to Fox 7 Austin, 24 previously homeless people have been permanently housed as a result of the program so far.

“The program identifies eligible workers through a combination of partnering organizations and our own street outreach. The only requirement to join the workforce first program is that an individual is experiencing or has experienced homelessness, is over 18, and that they may otherwise be panhandling.”

Workforce First provides transportation to and from the work sites, a free lunch, and $15 per hour of labor at the end of every working day. The hiring process is streamlined, organizers explain, by “removing any traditional barriers to getting started on a job.

“By removing these barriers and opening up access to work,” the website continues, “we hope to take one step in regaining trust and building community with people who may have become untrusting or frightened of society and its systems.”

The City of Austin partners with The Other Ones Foundation in the recruitment process, and finance for the continuation of the program is mainly generated by the work the homeless workforce completes.

Baker estimated that his workforce has collected approximately 60 tons of garbage from neglected spaces in Austin in the year since the program’s advent. “We give [employees] a vest and make sure they’ve got long pants and boots and gloves, but we carry all that stuff with us because we know we’re going to run into that stuff,” Baker told Fox 7.

Besides equipment, the team behind Workforce First helps their employees to obtain the forms of identification they need to seek full-time employment elsewhere. The popularity of the program is increasing.

In early October 2018, in celebration of the program’s first anniversary, Baker hailed a more-than-twofold expansion of the project’s workforce. The expansion should help alleviate the long wait list of approximately 100 new employees.

The Other Ones Foundation is even teaming up with the Veteran’s Foundation in a bid to expand the program’s reach and demographic. “With this expansion, one of the crews that we are going to be working with, a seven-person crew, is going to be made up exclusively of veterans who are homeless, in a shelter, and on a housing track,” Baker told KVUE.

On Oct. 16, 2019, the The Other Ones Foundation’s team posted an anniversary message on Facebook:

“Yesterday was one year since the Workforce First Pilot program started. We have fallen in love with our work, our friends we serve, and our supporters.

“Yesterday, we started our new year of WFF, increasing capacity more than twofold. None of this is possible without y’all, and the myriad organizations that have supported us.

For Workforce First employees who work outdoors on behalf of the city of Austin, and for the many more who may be recruited in the year to come, the beauty of the project extends far beyond the rejuvenation of public spaces; it’s the very real second chance to begin again.