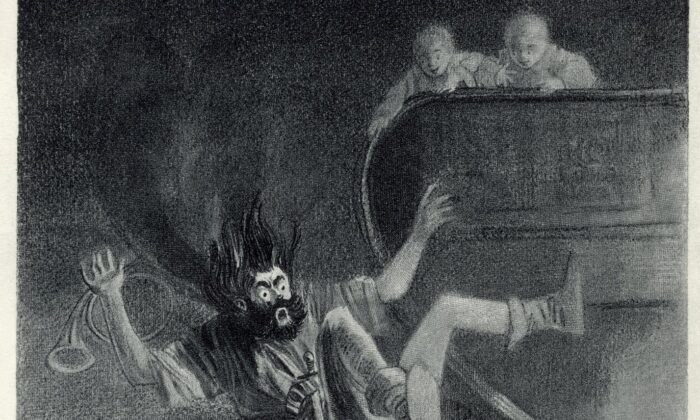 A detail from an illustration by Wallace Goldsmith showing the Otis twins playing a prank on the Canterville Ghost, from the “Complete Writings of Oscar Wilde [Vol VIII]: Lord Arthur Saville's Crimes,” 1909. (PD-US)
Performing Arts

The most important effect of any audio play is to inspire its audience to create visual images of the story being heard. This makes this particular medium an excellent fit for the Oscar Wilde 1887 short story, “The Canterville Ghost.”

American businessman Hiram Otis (Amir Abdullah) has just purchased Canterville Chase, an English country manor house, as a new home for his family. Lord Canterville (Gareth Thomas) is selling his ancestral lodgings because his wife can no longer tolerate the haunting by the ghost of Sir Simon de Canterville (John Hunter).

Visitations have plagued the Canterville family for more than 300 years. Sir Simon murdered his wife in 1575, only to vanish himself nine years later. Also disappearing was the collection of jewels belonging to Sir Simon’s wife.

Lord Canterville feels honor-bound to warn Hiram about the ghost before selling his property. Hiram pooh-poohs the entire matter, and the Otis family soon makes Canterville Chase their home.

Staying on are several former servants of the Cantervilles, including the housekeeper Mrs. Umney (Jennie Cosgrave), who is quite familiar with the ghost. The family, on the other hand, seems more interested in a bloodstain, seemingly permanent, on the library carpet where Lady Canterville was slain.

The first night of the family’s stay, they’re awakened by anguished moans and the clanking of chains. Investigating, Hiram finds himself face to face with Sir Simon, but instead of being frightened, he offers the ghost a small jar of Tammany Rising Sun Lubricator so the chains won’t make such a racket. Angered by Hiram’s impertinence, Sir Simon dashes the offering to the floor and vanishes.

As the Otis family quickly accepts the ghost in their midst, Sir Simon becomes ever more determined to drive them out. His efforts, however, come to naught; Roland and Roger even take to attacking him with pea shooters and manage to douse him with a bucket of water.

The one voice of reason comes from young Virginia. She tracks Sir Simon to his hiding place and, after initially berating him for his actions, finds herself feeling sorry for this spirit who has been alone and unloved for more than three centuries. Her warmth causes Sir Simon to see her as someone who can help him gain eternal peace.

The reason the story has such staying power is its artful combination of humor and horror. At the same time, it is also a tale about forgiveness and the realization that no one is past redemption.

This adaptation by Bernadette Armstrong, along with John and David Hunter, drops some characters and scenes from the original text, but effectively gets its messages across.

Particularly enjoyable is Sir Simon’s initial encounter with the family, as well as his conversation with Virginia. It would have been nice, as Sir Simon starts to plan his next moves against these strangers from America, to have included some additional scenes from the ghost’s viewpoint. We would like to learn how he feels about the house’s new inhabitants.

Standouts among the cast include Reed and Montgomery as the rambunctious twins, and Abdullah as the pragmatic father. Hunter does a very strong turn as Sir Simon, outwardly angry, but actually a destroyed and broken soul. Koledo believably plays Virginia as someone wise beyond her years, eventually offering to help Sir Simon at great risk to herself.

Director Bernadette Armstrong ensures the action moves at a steady pace, all filled with nicely descriptive passages. The use of these allows the audience to fill in the appropriate images to accompany the scenes.

Sound engineer Hall Cantrell does an effective job, particularly in connection with the first appearance of Sir Simon.

This is a strong presentation of “The Canterville Ghost,” one quite suitable for all ages. It’s a tale that has more going on than it first seems, if one looks deeply enough to find it.

The work is being presented by Hands Across the Pond Theatre: a collaboration between the Pasadena, California-based Open Door Playhouse Theatre, and the UK-based Our Kid and Me Productions.