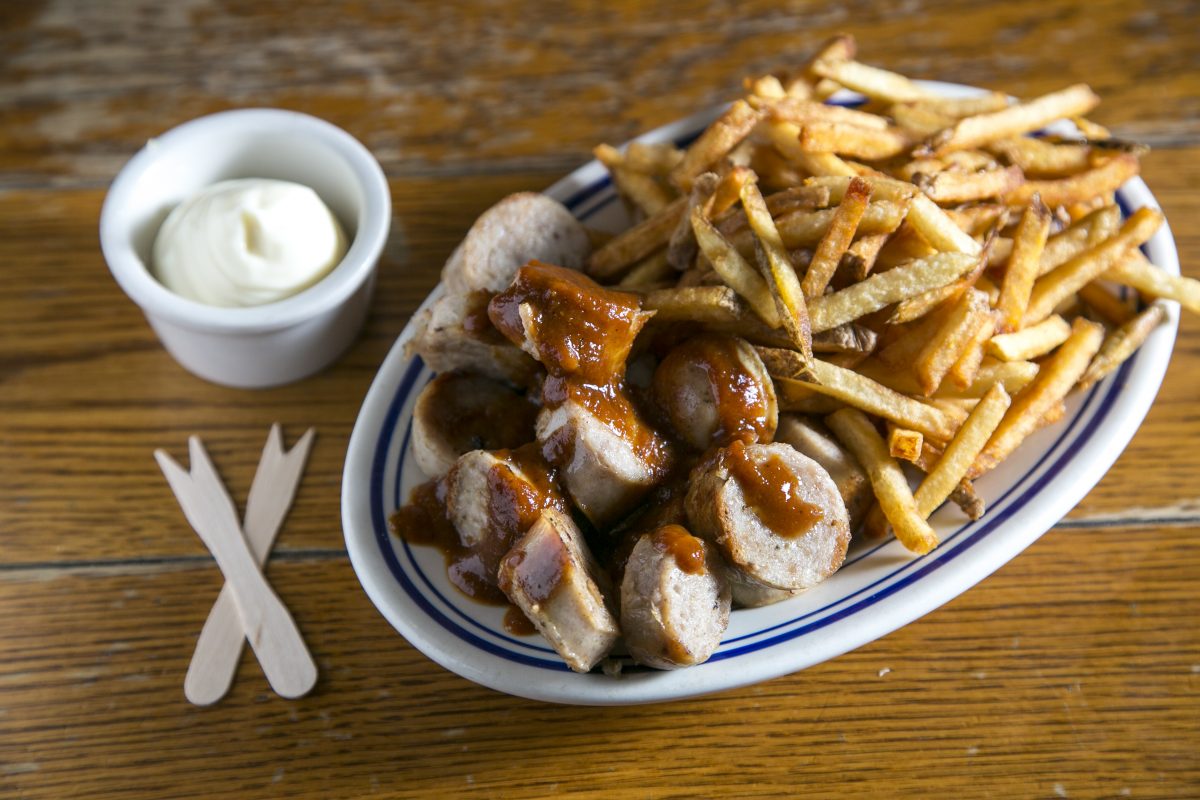 At Wechsler’s Currywurst, Sausage Is King

In Germany, sausages are ubiquitous. Not just sold on street corners, or the small food shops called imbiss, but also splayed across the landscape of language.

Crunch time is described as “Jetzt geht’s um die Wurst” (“Now it’s about the sausage.”). If you couldn’t care less about something, you might say, “Das ist mir Wurst” (“That’s sausage to me.”), and when you want someone to stop whining, you might tell that person, “Spiel nicht die beleidigte Leberwurst” (“Don’t play the sore liver sausage”).

If you’re a German abroad, it’s just possible that subliminally through all that sausage-centric language, you might feel compelled to search out your favorite wurst (sausage in German, pronounced “voorst”).

That’s what Andre Wechsler did when he moved to New York from Germany. He could not find a spot that did currywurst right, he said. So Wechsler made his move from finance to the restaurant business.

Wechsler’s restaurant is tiny—you might easily miss it walking by. That doesn’t stop regular New Yorkers or German expats from finding it. Even the most ephemeral of expats, you could say—meaning a German tourist in New York for the weekend only—has been known to drop by.

“In the beginning, I sent them away. For a weekend, come on … ” said Wechsler, who used to offer them some alternatives around the corner.

Or maybe they couldn’t do without a taste of home.

Wechsler’s is a cozy, rustic spot, with the sounds of spoken German floating around. When it’s not rush time, you might find one very efficient staff person playing the role of host, chef, waiter, and bartender.

Hanging in the back is a huge black-and-white photo print of Wechsler’s great-great-grandparents, who owned a butcher shop in a village outside Munich. (But let’s get priorities straight. When soccer time comes around, a projector screen slides neatly over the family picture.)

The restaurant is a paean to its namesake, currywurst.

It’s nothing complicated—sliced bratwurst, made of pork and veal, doused liberally with ketchup and topped with a sprinkling of curry powder. What pushes it over the top is the homemade ketchup: served warm, made with a tomato base, vinegar, Worcestershire sauce, fruits, and spices that give it a fragrant aroma, redolent of faraway lands. It would seem almost incongruous with the meaty savory sausage, but it is plainly addictive.

It’s no wonder currywurst has attained such a popular status in Germany.

When Wechsler was growing up, it would often be an after-school snack at the local imbiss, in a very “Shh, don’t tell Mom” kind of way, as he explained. Healthy it is not, but tasty it definitely is.

The sausage in the case of currywurst, Wechsler explained, is “the carrier for the ketchup. The ketchup is the most important thing.” The bratwurst he’s picked out is on the milder side so the flavors of the ketchup really come through.

It’s best to accompany the currywurst with the twice-fried french fries. They are cut in-house, and for those who like crispy fries, excellent. Wechsler recommends dipping them in mayo and the house ketchup (currywurst with fries, $7; without fries, $5).

If the sauce for currywurst outshines the sausage, there are also other offerings on the menu where the sausages are the main stars.

The Nürnberger Bratwurst, for example, has a long history. Dating to records as far back as the 14th century, it was said to be a favorite of author Johann Wolfgang von Goethe, who asked for deliveries of the sausage to his home in Weimar.

Thin as fingers and made with pork, ground caraway, garlic, and marjoram, they go wonderfully paired with sauerkraut and mashed potatoes ($6 for three links). I found the sauerkraut especially refreshing to cut through all the fattiness. The restaurant gets its sauerkraut shredded and doctors it with white wine and juniper berries. Wechsler loves it mixed with the mashed potatoes.

The Käse Krainer ($7), an Austrian specialty, is a rich beef and pork sausage, whose filling includes garlic, onion, and Swiss cheese. The cheese gives it a deliciously creamy texture.

Mustard is the essential complement to these sausages, from a super hot Dusseldorf nose scorcher to a sweet mustard to go with some Bavarian specialties like Leberkaese.

Wechsler also recommends the wild boar sausage ($7) marinated in red wine and herbs. It’s not gamey in the least, and although I didn’t like it as much as the other sausages, I had friends who did—which goes to show there’s a sausage for every taste out there. For those whose taste buds yearn for something spicier, the lamb merguez ($7)—not so much German as North African—is a good pick.

Wechsler’s has German beers on tap, which are the natural choice to pair with the wurst and quench your thirst.

They range from the clean and crisp Reissdorf Kölsch, which come in tiny glasses ($3 for 0.2L) (in Koln, where it’s from, emptying a glass is an automatic invitation for a refill unless you cover it up with a coaster, explained Wechsler) to a more hoppy Pilsner-style Raderberger ($5, 0.4L), to a startling Koestritzer Schwarzbier, a very crisp dark lager made with toasted malt ($7 for 0.5L). There’s an also extensive selection of bottled German beers ($5–$8).