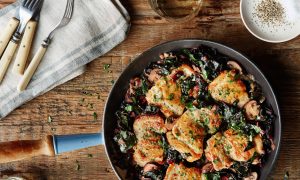 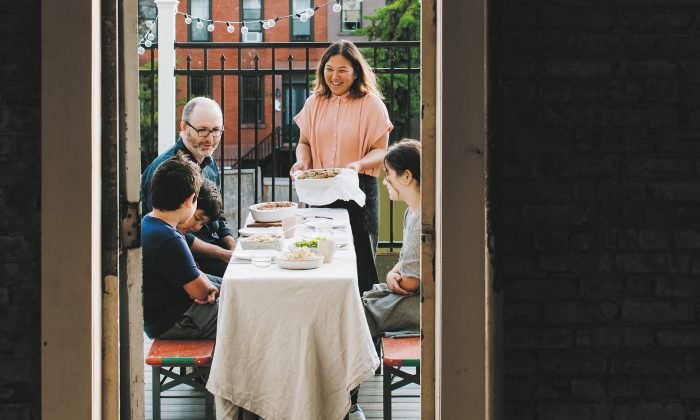 For Hetty McKinnon and her family, meal times are a chance to reconnect and strengthen family ties. (Luisa Brimble)
Food & Dining

At the Family Table With Hetty McKinnon

The Australia-born, now Brooklyn-based cook and food writer is plenty busy: Her many hats include founder of salad-delivery business Arthur Street Kitchen back home in Surry Hills, Sydney; creator and publisher of Peddler Journal, a biannual multicultural food magazine; co-owner of Neighborhood Studio, a community kitchen space in Brooklyn; and beloved cookbook author, with her third and latest book, “Family,” released in the United States this April.

Her three kids—9, 11, and 13—don’t sit still much, either. Between school, after school baseball, and music lessons, they “lead full, busy lives, sometimes as busy as my husband [who is a lawyer] and [me],” McKinnon said.

But at the end of the day, come dinnertime, they all find their way back together.

“Family dinner … is the one time of the day we can all sit down and reconnect,” McKinnon said. “The family table is an anchor, a time to slow down and take time for one another.”

McKinnon’s mother, a Chinese immigrant who moved to Australia in her early 20s, took her cooking seriously. Family meals were a big deal.

“We woke up with her cooking, and we went to sleep with her preparing the kitchen for the next day,” McKinnon said. “She was a force.”

Dinner each night was a traditional Cantonese banquet: five or six dishes and a medicinal broth, set in the middle of the table with bowls of rice all around. McKinnon recalled her mother sometimes going to great lengths to source ingredients in preparation for a meal, hopping on multiple buses or trains to track down the best brand of tofu or noodles across town.

“I remember often wondering why she was so obsessed with cooking,” McKinnon said. “It seemed excessive, especially as I knew this wasn’t the way my friends ate at dinner time.”

Her mother didn’t even eat much of what she prepared, McKinnon said. She would join the family at the table, exhausted, after everyone else had already started eating, and after confirming that the food was good (it always was), she would prepare her own dinner: the evening’s soup ladled over her bowl of rice.

As McKinnon grew and started a family of her own, though, she began to better understand her mother’s intentions: “For her, cooking was her way of nurturing.”

“I’ve realized how seminal these moments around the table were for me,” McKinnon said. “[They] gave me an appreciation of how to express love—whether it be via food or verbally—and how satisfying it can be to nurture others through food.”

As for her mother’s bowls of soupy rice, McKinnon realized the dish was a comfort food of sorts, perhaps a relic of childhood meals back in China. In “Family,” she dedicates a recipe for a simple broken rice soup to this memory.

Now, McKinnon continues the ritual with her own kids.

In place of her mother’s Cantonese feasts, though, she fills her table with multicultural vegetarian dishes her family has grown to love: hearty salads, soups, pastas, and bakes. These family favorites fill the pages of her latest cookbook.

One of McKinnon’s personal favorites is a deconstructed falafel salad, whose pan-charred leaves of kale all but disappear under a mountain of crispy chickpeas, roasted with cumin and paprika—a salad-topper game changer.

Another that ranks high on the family polls is the halloumi, mint, and kale gozleme, a Turkish street food specialty that tucks oozing, cheesy insides in a griddled flatbread wrap. The flatbread is made with a three-ingredient yogurt dough simple enough to throw together on a weeknight; it’s an easy blank canvas for other fillings, savory or sweet (McKinnon suggests Nutella and bananas, for one).

There are plenty of nods to McKinnon’s cultural heritage, too, such as her mother’s recipe for stir-fried tomato and egg, a Cantonese home cooking classic with a soupy sweet-savory-tart sauce that begs to be spooned over rice. McKinnon whips out the dish when she’s in need of a quick and easy weeknight fix.

And whatever the menu, she serves the food family-style, as her mother did, set in the middle of the table for everyone to help themselves. “It’s a much more social way of eating,” McKinnon said, and as a bonus, it encourages her kids to branch out and try a variety of foods.

With all the hustle and bustle of modern life, McKinnon acknowledges the challenge of getting regular family meals on the table. But a key step in overcoming that challenge, she said, is a simple mental switch: “It’s about mentally thinking about family meals as an everyday ritual; then we won’t feel so flustered about cooking.”

Home cooks put up obstacles for themselves when they “feel pressure to whip up a gourmet meal every night, and that puts them off cooking,” she said. Instead, she encourages busy parents to prioritize the heart of the matter: “Think of the ritual first, and put emphasis on that. What you actually cook is almost secondary.”

A crucial component is the pantry, which McKinnon calls “the engine of your kitchen.” Stock the shelves with versatile staples, such as canned beans and tomatoes, pasta, rice, and lentils. This can be built over time: “If you are shopping for canned, frozen, or dry ingredients, buy two instead of one, and stash the spare in the pantry for a rainy day,” McKinnon says.

Canned beans are her secret powerhouse: instant building blocks for a nutritious meal. She’ll pan-fry or roast them until crispy for a snack or topping; smash or puree them with herbs and spices for a rustic spread or velvety sauce; or simply toss them into any pasta, soup, or salad to fortify it with a healthy dose of plant-based protein.

All in the Sauce

According to McKinnon, the secret to easy and flavorful vegetable-based dishes often lies in the sauce. A good, herby oil or umami-packed dressing does wonders for a simple bowl of roasted veggies and grains; top it with a handful of nuts or seeds and a fried egg to further up its staying power.

In “Family,” McKinnon introduces two midweek “cheat dressings” that are dead simple but full of flavor: a versatile herb oil, made with extra-virgin olive oil infused with a generous handful of herbs chopped up with a clove of garlic and salt; and a zingy citrus tahini sauce, with a few tablespoons of tahini and the juice of half a lemon or lime, plus more garlic and salt. Mix well and drizzle away on grain bowls, salads, pastas, and roasted or grilled vegetables.

Cooking under a time crunch is one part of the weeknight equation; coming up with dishes the whole family will actually eat and enjoy is another. McKinnon encourages her kids to try everything—and won’t give up without a few good attempts.

If they turn their noses up at a particular food, she’ll try presenting it in a different way (if they won’t eat a vegetable raw, how about roasting it with a spice?) or pairing it with something more familiar (she loads her middle son’s favorite pesto potato and pasta salad with plenty of broccoli and other less-liked greens).