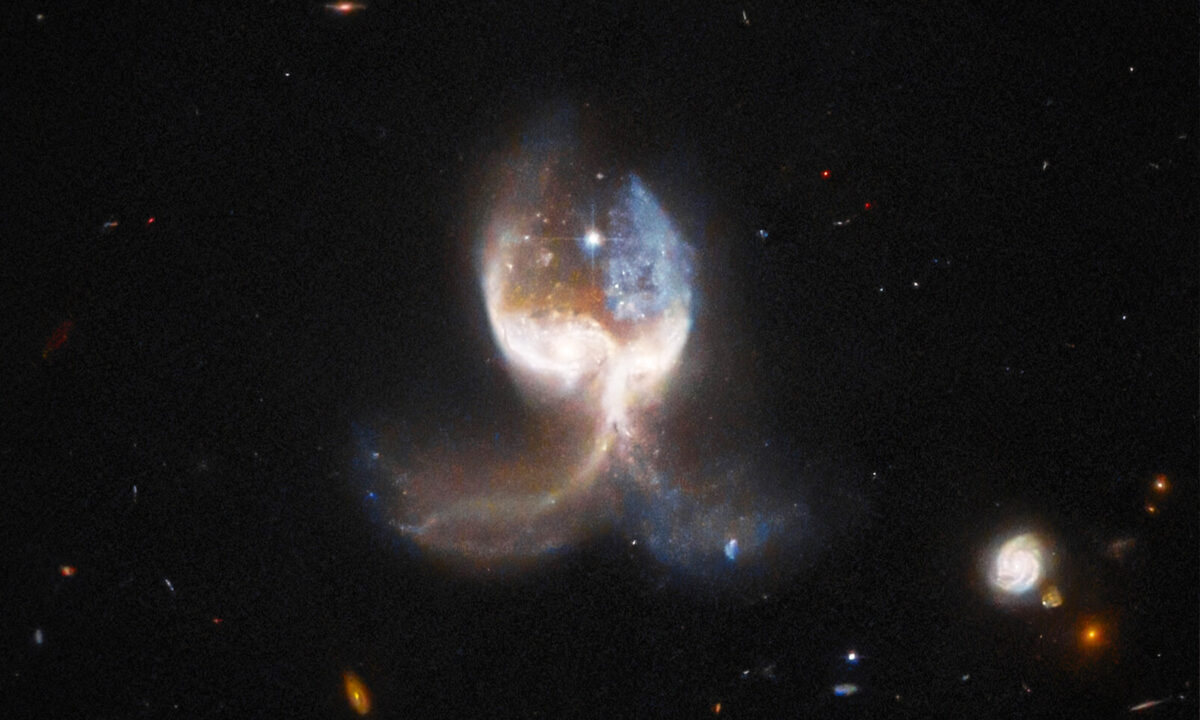 Out of a vast galactic menagerie of space images, a pair of celestial “angel wings” was discovered by researchers—the stunning spectacle, composed of trails of stars and dust, formed as a result of two galaxies colliding.

The picture, taken by NASA/ESA’s Hubble Space Telescope, shows a nearly symmetrical object in the VV689 system, in the constellation Leo, which is actually the product of two distinct galaxies in the process of merging.

Although stars in galaxies are typically too far apart to collide with other stars in such encounters, the gravitational interaction between these two objects is enough to cause deformations, throwing stars into different orbits. This yielded the almost symmetrical trails of stars and dust and gave rise to the object’s nickname: the Angel Wing.

The sighting in the VV689 system is unlike chance alignments of galaxies which merely appear to overlap from the viewpoint of the Earth—such as Hubble’s sighting of a galactic pair called NGC 3314 in June 2012, which appeared to collide but this was actually a trick of perspective. The galaxies were actually tens of millions of light-years apart.

Another Hubble finding, in May 2012, revealed that our own Milky Way is, in fact, on a collision course with our neighboring Andromeda Galaxy (or M31). The cosmic meetup is expected to happen some 4 billion years from now and will likely fling our sun into a new region of our galaxy; though it hasn’t yet been determined whether the encounter will be a head-on collision, a glancing blow, or a near miss.

It will then take another 2 billion years for the pair to merge together to form a single elliptical galaxy similar to those commonly seen throughout our local universe.

The discovery of Angel Wing in the VV689 system was a product of Galaxy Zoo, a crowdsourced citizen astronomy project consisting of hundreds of thousands of volunteers who helped astronomers wade through a deluge of data from robotic telescopes and to classify galaxies.

The volunteers discovered a rogues’ gallery of weird and wonderful galaxy types, some of which had not been previously studied. Noteworthy objects from the project were chosen for detailed follow-up observations using Hubble’s Advanced Camera for Surveys. The selected celestial targets for inspection include ring-shaped galaxies, unusual spirals, and a striking selection of galaxy mergers not unlike VV689.