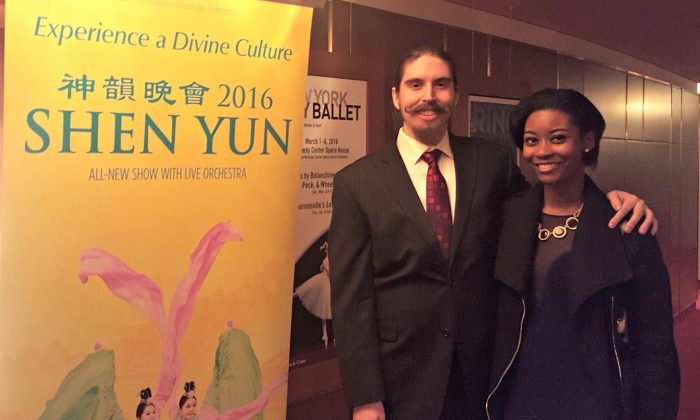 Shen Yun Performing Arts’s opening night performance at the Kennedy Center Opera House on Feb. 16 included all of the above. Finance student Emerald Pollard thought it was “spectacular, I was beyond ecstatic with everything.”

On her third time watching New York-based Shen Yun, she brought along her boyfriend Kevin Green, an aspiring actor. For him, it was a deep learning experience.

“It’s interesting to see the history and culture through a performance,” he said.

Each of the Shen Yun’s individual songs or dances highlights some cherished value of traditional Chinese culture—compassion, loyalty, kindness or bravery—often by telling a story, sometimes through the singing of award-winning vocalists.

In the story “A Steadfast Heart,” these traditional values are demonstrated in the present day. The beliefs of an elderly couple helps them to overcome persecution in China, with divine help.

“[Falun Dafa] was a traditional religion and spiritual practice that was suppressed by the communist party in an attempt to maintain control, even though it really is just a practice of compassion and caring,” Mr. Green explained.

Mr. Green explained that this was because the totalitarian regime would fear a group that had so many members. In less than a decade since its inception, the number of people practicing Falun Dafa swelled to over 70 million mainly through just word of mouth.

Mr. Green appreciated the spiritual element of the traditional culture in the performance, bringing the East and the West together.

“I think that at the core of most cultures, everyone’s goal is to get along and treat others in a way that they believe is good,” he said. “They want to treat each other well. I think that we’re really not all that different and this shows that very well.”

Miss Pollard added that this performance showed family values. She got the sense of people coming together and supporting each other in their beliefs, even when those beliefs are attacked.

“Everyone’s goal is to get along and treat others in a way that they believe is, for lack of a better term, good,” he said. And the performance was a prime example.