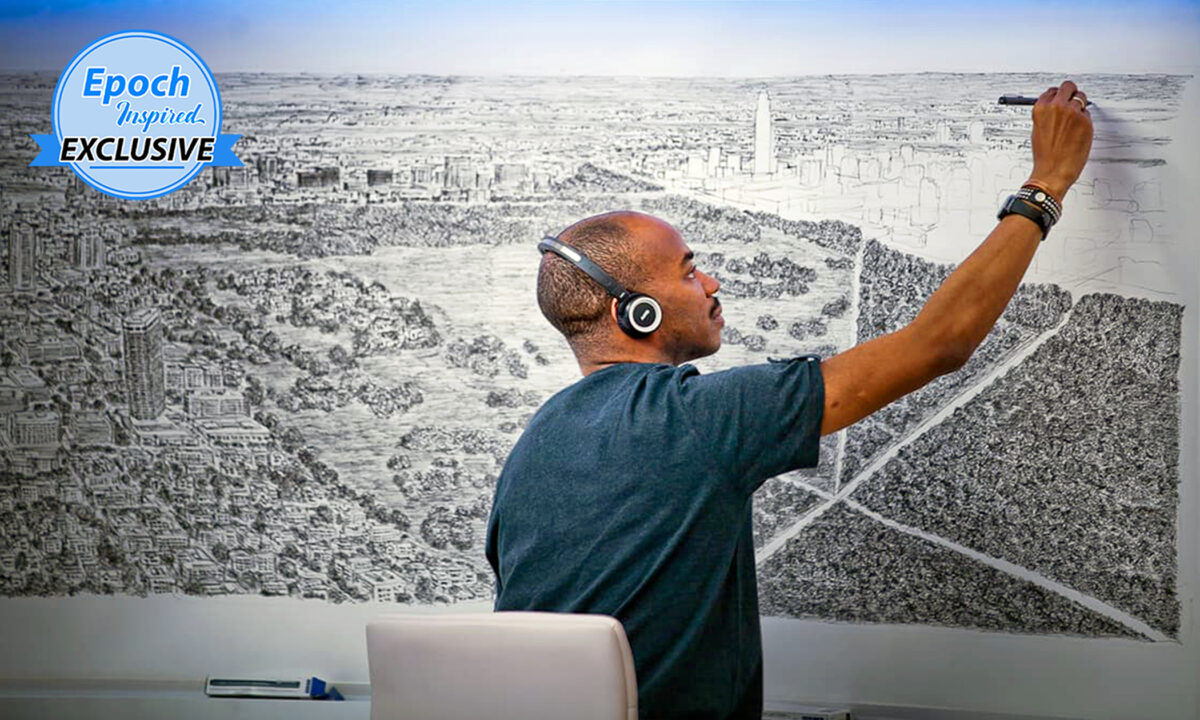 Diagnosed with autism at 3 years of age, this British artist found his voice through drawing. Today, he draws epic, near-accurate cityscapes from memory after just one viewing, and has received the award of an honorary MBE, becoming a Member of the Order of the British Empire, for his unique contribution to the art world.

Stephen Wiltshire, 47, was born and educated in London, England. Describing himself as an “artistic savant,” he didn’t speak until the age of 5—his first word was “paper”—but found his expression elsewhere.

“I had no communication, and therefore learned to communicate by drawing,” Stephen told The Epoch Times. “I was three or four years old when I first put pencil to paper. I started with animals and lift shafts, then cars, and finally buildings,” he recalled. “I still continue to draw buildings, only now on a grander scale.”

As Stephen grew up and absorbed his surroundings, so his passion for drawing high-rise buildings and cityscapes intensified. On school trips, he was introduced to London’s most iconic buildings, and drew his first city panorama, in Venice, in 1989.

He explained, “My early drawings were quite developed as they had a two-dimensional effect. I can’t describe how I do this, I just know how to do it; I practiced a lot, and sometimes would get frustrated when it didn’t work the way I wanted.”

Stephen’s coping mechanism was to “study for hours,” absorbed by the details of city architecture. To date, he has visited dozens of major international cities, including Tokyo, Hong Kong, Jerusalem, Paris, Moscow, Dubai, Rome, Sydney, and New York, rendering their unique skylines and idiosyncratic features in amazing detail.

In 2014, Stephen presented a 13-by-3-foot rendering of Singapore’s skyline to the country’s then-President Tony Tan Keng Yam. In 2018, he took a walking tour and 40-minute helicopter ride over Mexico City, after which his 13-foot artistic rendering, from memory, was live-streamed to the world.

Admitting that unfamiliar cities pose the biggest challenge, Stephen claimed that taking photos and flying over the area helps him “see things better.” A large panorama drawn from memory can take him anything from four to eight days to render, while a “letter-sized” drawing may take a few hours.

Stephen said that if he is “not confident, or not familiar with the area,” or is short on time, he will map out a rough sketch before committing pen to canvas. His chosen tools are Staedtler pens with nibs ranging from 0.05mm to 0.7mm, plus charcoals and chalk pastels for adding color.

A typical day, Stephen said, involves rising for breakfast before heading to his West London studio to work on commissions. After lunch, he continues working on his art, and will take walks to generate inspiration on sunny days. He eats dinner at home and relaxes on evenings and weekends.

“I draw every day; it’s impossible to put a number to how many I draw. It’s a lot!” he reflected.

Stephen has amassed several awards for his work. He was discovered by a literary agent as a boy and won a Child of Achievement Award in 1988. A local newspaper got involved, Stephen appeared on a children’s program talking about his work, and was later featured in a documentary alongside “three other savants with phenomenal skills.”

His first commission, at the age of 8, was from the British prime minister. He published his first book of drawings just five years later and has since published additional volumes with forewords from high-profile personalities he’s met along the way.

He earned his MBE in a presentation by England’s Prince Charles in 2006. Today, Stephen has a permanent art gallery in Notting Hill, London, managed by his sister, Annette.

“I am always very happy to show my artwork to people, especially when they buy it and display it on their walls,” he told The Epoch Times. “People are very nice to me, and when they see my work at the gallery I feel good inside.

“I work very hard and I like what I do. It’s all I know, apart from having an encyclopedic memory of American classic cars!” he added; Stephen owns 70.

The talented artist’s motto is also his advice to others: “Do the best you can, and never stop.”

Check out more photos below: