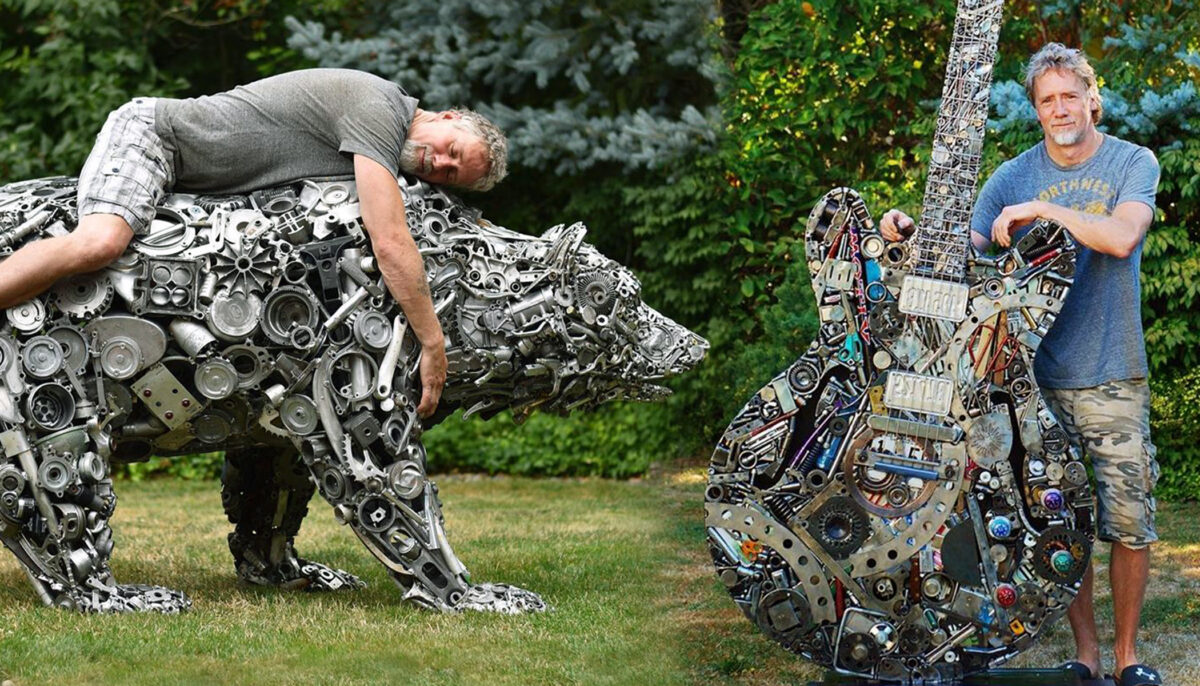 While environmentalists have called on the world to reuse and recycle, artist Brian Mock has taken this concept to a whole new level by creating works of art made of scrap metal. Based in the suburb of Portland, Oregon, Mock taught himself how to weld and began to experiment with metal sculptures in the late 1990s.

His medium of choice? Things that others had thrown away. Mock explained to Wescover, “I love working with reclaimed items because they’re already interesting and historic in their own right.”

“Giving these old, ordinary items a new life as one sculpture is an artistically demanding, yet gratifying, process,” Mock says. His full-sized statues consist of hundreds of car parts, nuts, bolts, tools, and wires, all of which he helps viewers appreciate in a new way.

Mock uses whatever materials he can find to fit the sculptural idea he has in mind. For a larger-than-life-size metal guitar sculpture titled “Heavy Metal,” Mock used pieces of scrapped license plates to form the headstock and old guitar parts to form the body.

“I am intrigued by the challenge of creating an entirely unique piece of art from a random collection of discarded and often commonplace objects,” he said to Wescover.

This interest is evident throughout his creative sculptures, such as the Crouching Man he made for the Dirty Habit restaurant in Washington. “Appropriately layered with (used) spoons and forks,” Mock said. “This piece was designed to encourage a sense of ‘uncomfortable intrigue’ to match the restaurant’s atmosphere.”

One of his dog statues, titled Zepto, which resides in the Zetta Hotel in San Francisco, is made out of nuts and bolts, spatulas, sieves, and fork handles.

His inspired configurations of metal detritus mean that each piece is one of a kind. “All of my sculptures are 100 percent originals—none can ever be duplicated or reproduced,” Mock asserted. “I also include a personal item in all of my sculptures, sort of like a physical signature.”

While metal can be seen as something cold and lifeless, especially when it’s in a scrap heap, Mock finds a way to bring it to life. “My sculptures are also designed to encourage viewer engagement. Audience reactions fuel my motivation and help bring my visions to life,” he says. “My pieces come to life as soon as they have eyes, and/or when I can achieve a fluidity of motion (as in the hair of a mane or the curve of a fin.)”

Though his sculptures have won acclaim and been featured in major galleries, hotels, and public spaces around the United States, Mock’s approach remains thoroughly simple and homemade.

When it came to making sculptures of dogs and cats, he used his own animals to serve as models. “I use my dog Haley as a model when I’m sculpting dogs and inevitable hilarity ensues when she’s in the shop,” he noted. “She and my wife are my two best (and only) coworkers!”

While Mock’s art might be one of a kind, he says that he would like it to inspire others to think differently about trash and scrap. “I hope my work encourages people to stop and engage—to look closer at the items they recognize and reflect on the possibilities of reuse in their own lives,” he says.