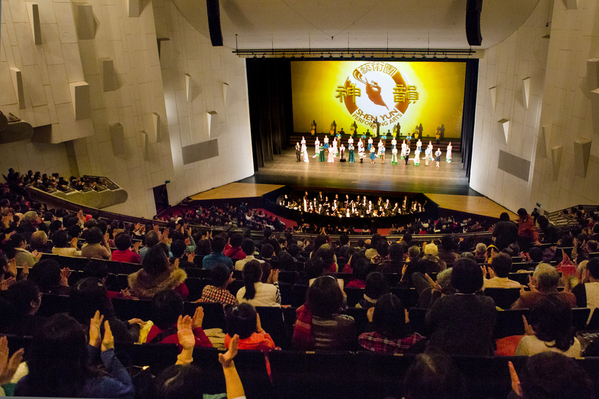 The company states that it hopes audience members will leave the theater feeling uplifted and renewed. Ms. Peng, who is president of Tainan Xiangyang Artistic Association, seemed to experience that renewal. She said of the Shen Yun artists, “What they intend to convey are sincerity, compassion and beauty. Aren’t these something we are longing for in our lives?”

As an artist, she said she was excited by the visual part of the performance. “It’s indeed spectacular. The performers seamlessly blended themselves with the digital animated backdrops. It’s really great! The backdrops are so vivid and lifelike.”

According to the company website, “Shen Yun’s digital-backdrop team creates vividly animated settings, extending the stage and transporting the audience to a world where heaven and earth are one.”

The classical Chinese dance in Shen Yun “contains China’s rich cultural traditions, which allow its movements to be deeply expressive,” according to the program. Ms. Peng said, “I love the dancers’ way of expression. It’s very peaceful and beautiful. Performers are very vigorous and skillful. Their performances are very coherent, concise and smooth.”

Another famous painter saw Shen Yun on March 14. Wu Fengming is board director of the Tainan City Portrait Artists Association and president of Yi Mei Tang Arts Gallery. He said he makes sure to see Shen Yun every year. For him, it is deeper than mere entertainment:

“What is conveyed in the show is something righteous, and all of Shen Yun performers also have this kind of spirit. From their dances, we can tell they are performing with their hearts.”

Mr. Wu is very well-known, yet one of the things that impressed him about Shen Yun was an idea of not seeking to be well-known, he said.

“I personally could feel the righteous energy. It’s a spiritual feast. So, I see the show every year. (Shen Yun implies that) the objective of learning dance shouldn’t be to compete for fame. The righteous energy is what we need. Taiwan also needs it. It’s really helpful.”

Along with classical Chinese dance and traditional ethnic dance, Shen Yun offers songs. Mr. Wu said, “The lyrics are essential. When the soprano sang ‘The blood of the holy believers is shed on others’ behalf,’ it was really overwhelming.”

The meaning and the beauty affected him. “I felt the power.”

Mr. Xie described Shen Yun as something extraordinary. “It’s a miracle assisted by divine power. It’s wonderful to pass down the 5,000 years of the Chinese culture. It’s a blessing.”

Mr. Xie has won many honors, including the Award of Shodo Calligraphy Society in Japan and Best Paper Award of Japan Calligraphy Art Institute. He is president emeritus of Tainan Country Calligraphy Academic Society. Though he has traveled the world, he has never seen anything like Shen Yun. “To use high-tech to demonstrate the 5,000 years of Chinese culture is indeed something miraculous. I’m quite old and have been to many countries, and I’ve seen many movies, but I have never seen such a magnificent show.”

He said he felt it was his privilege to experience Shen Yun.

“As this show is so spectacular, I am very grateful to have this opportunity to see the performance. It’s a great honor in my lifetime. I hope those who haven’t seen the show are able to have the opportunity to see it someday. The show makes me feel like working harder to explore our bright future,” said Mr. Xie.

One violinist responded to the music of Shen Yun. Ding Yuan Lin saw Shen Yun on March 12, and said the the reason it is so beautiful is that the artists perform with sincerity.” If there was no compassion in their hearts, their performance wouldn’t have been so touching.”

For him, a unique beauty was in “soprano Geng Haolan’s voice. Her voice is very special. Its pitch was very high as if it could penetrate our hearts.”