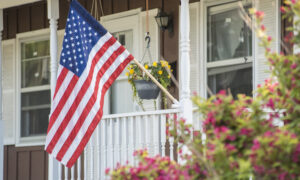 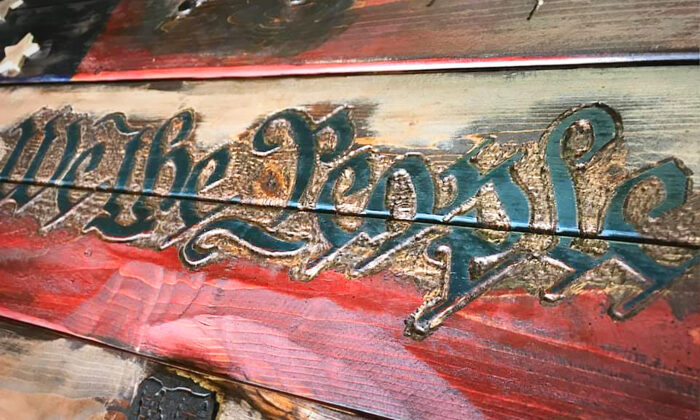 An artist has donated a lovingly crafted American flag sculpture in memory of the 2020 Easter tornado in Jones County, Mississippi.

The tribute pays homage to the lives lost and the heroes who stepped up to help during the crisis.

Artist Jason Saulpaw presented his handiwork in an April 3 ceremony at the Laurel Veterans Memorial Museum. Local residents and representatives attended, honoring efforts to restore their town after the April 12 storms last year.

The 49-year-old works in retail management, but runs his passion project, The Patriot Art Company, sculpting flags off hours.

Recalling the storms looming near his neighborhood and calls to evacuate, he told The Epoch Times, “I got out of my place … I thought I was going to a safer area.

“But it turned out I put myself in the path of worse than I would have been if I just stayed home.”

The artist watched the storm unfold from a friend’s house. Leaving the area to check on his home, he witnessed a second tornado pass through the town, hitting two homes.

Saulpaw described it as “another close call for the day.”

He recalls chaos, but also people coming together in the aftermath: to share food, water, and supplies; to restore power and clear properties; and transport injured people to hospital.

Facebook was lit up with messages from locals checking in on neighbors. Helpers loaded up gear, such as chainsaws and tractors, and headed to the worst-hit areas to help.

Saulpaw recalls one man from Alabama who passed away during the cleanup, and three other locals who died.

And despite division often portrayed in the media, Saulpaw saw only unity during the crisis. “It didn’t matter who you are, what you had, what color you were,” he said, “everybody was helping everybody.”

He also joined in the efforts while maintaining his full-time job. He is proud of the selflessness demonstrated by local first responders, fire department, EMTs, and law enforcement officers, he said.

During those few days, that feeling turned into a desire to create.

“It hit me that I needed to try to collect some of the debris and memorialize the situation … all the good people that came together to help each other,” he explained.

“I didn’t want anything for it; I just wanted to give the community something back.”

Saulpaw crafted the American flag from a base of wooden planks, which he supplied, and added smaller elements from donated debris.

The hardest part, said Saulpaw, was the carving. “Your hands cramp up pretty good after [you’ve] been doing it for a few hours.”

Saulpaw reached out to Laurel city officials, locals, and the Laurel Veterans Memorial Museum. Law enforcement and local biker clubs even escorted the artwork to the museum where it was presented.

“Obviously we saw the loss of life and destruction,” said PJ Weeks, Pastor of First Baptist Church, Soso, during the presentation.

“But God’s grace through it all in bringing so many people, so many heroes, from our next-door neighbors to people down the road in other counties and other states.”

Saulpaw told The Epoch Times he felt he had to contribute the work, adding that one of his simple rules to live by is to wake up every day and try to do the right thing.

“When times get easy, people forget … they go right back to their old ways,” he reflected.

“I think [we] would be light years ahead if everybody would remember disaster times like that, when everybody came together like brothers and sisters and helped each other.

“It was basically all for one and one for all.”